How I (Don’t) Teach My Kids to Read

One of the homeschooling questions I am asked most frequently is “What do you use to teach your kids to read?”

I usually explain that I haven’t yet had to do any formal reading instruction with any of my kids. I have three fluent, eager readers now, and every one of them learned pretty much the same way:

51) When at some point I notice the child is beginning to recognize her name and other simple, common words, I pull out our trusty Bob Books.

Read-alouds and Bob, that’s how we’ve done it three times in a row.

The Bob Books, if you don’t know them, come in sets of twelve: a dozen small paperback booklings (I just made that up; it means more than a booklet but smaller than a regular book), each focusing on a phonetic sound. Each book in the series builds on the sounds mastered in the one before. But “mastered” makes it sound so formal. We haven’t used them in a formal “now you will learn to read” manner at all. We’ve just read the books together, and it’s like the kids can’t help but start decoding the text. The format makes sense.

Jane was reading at a crazy-early age, but you have to remember that she spent her toddler years in a hospital bed. We read all day long, for weeks and months on end. Couldn’t take her to the playground, not with her low platelet and white cell counts. Couldn’t go much of anywhere. But by golly, we could read. Scott would come home from work to find a stack of picture books as high as the sofa we were curled up on: the evidence of what we’d done that day. Lucky for Jane I had connections in the children’s publishing world…I don’t know how we’d have fed our habit otherwise. 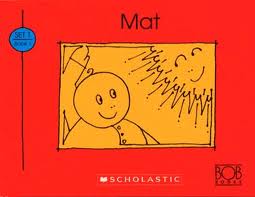 Rose took off at around 4 1/2. Same process: a bajillion read-alouds, and then, in a casual, relaxed manner, the Bob Books. She loved Bob and his pals: that wacky Mac who sometimes sat on Sam for reasons impossible to explain in one-syllable words. And later, the cat and the dog, and that pig! What was her name? Jig? Man, we giggled over that pig.

My mom bought Beanie a whole new set of Bob Books when her turn came around, because Rose had scattered the others. They’re such a nice comfy size for tucking into little purses, you know.

Beanie was, I think, about the same age when she got into Bob: four going on five. She was reading quite well by last summer (whew, just in time for the cross-country trip), so that would have been age 5 1/2.

That really is all I’ve done: read-alouds and Bob. The Bob Books have been the bridge for all three of my girls, an easy, friendly bridge with funny, quaint pictures and silly storylines. They didn’t know they were learning phonics. We didn’t do any writing or spelling or workbooks at all. We just read the Bob Books together. First I read them to the child, then she read them to me.

It’s been so exciting, every time! The thinking behind the concept is that a child builds confidence by being able to read a “real book” all by himself. This has absolutely been the case for my three girls. “Daddy, I read a book all by myself!” Beanie said, I recall, sounding like a commercial. I probably sound like a commercial myself, but I’m being sincere. The amount of text on a page, the number of pages in a book—they were the perfect stepping stones for my kids.

So there you go, that’s my answer. We read, read, read, read: read really good books. Beautifully written books, books you’d think were over their heads. As long as there was good story in those noble words, the kids have gulped them down.

And then, when the time felt right—which is to say, when it felt fun, not stressful to the child in any way, with no sense of expectation to make them feel anxious or pressured—I introduced them to Bob.