So I copped to having kind of a thing for bags, and I promised some pictures.

This is the first bag I wrote about, the pretty little summer bag made by Heather of Beauty That Moves.

Heather’s photo is prettier (petunias!), but this is the bag’s regular spot now, hanging from our front door. (When I’m at home, I mean.)

(Boy do I need to wipe down that doorjamb.)

Moments after I snapped that picture, I caught a pickpocket in the act. Crime scene photo is blurry because the culprit moves fast. 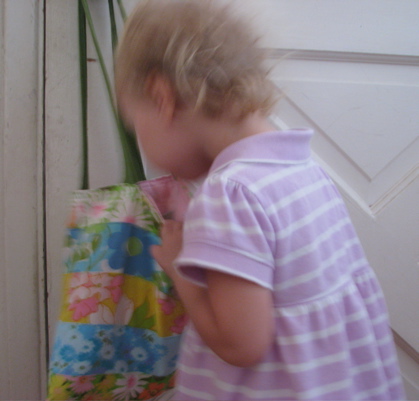 Caught redhanded, she is filled with remorse. Or not. 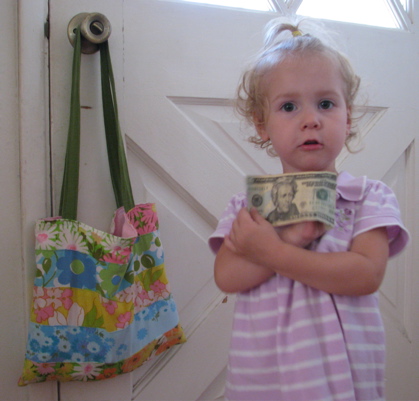 “Wook! I foundit my money!”

Not so fast there, missy, I might need that to buy a new bag at some point.

The sight of the new bag, the famous life-altering Comic-Con bag, will no doubt present an anticlimax after all the hype, but here it is in all its lime green glory. 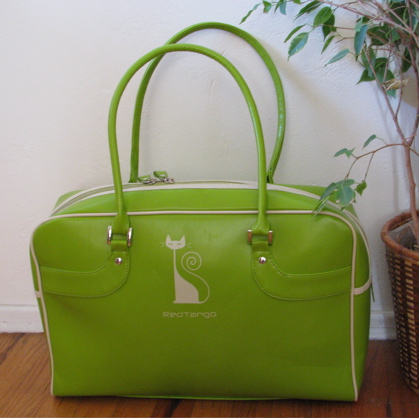 What can I say? It had me at curling kitty cat tail.

The Heather bag holds my keys, phone, wallet, sunglasses, rosary, Tic-tacs (because to my dismay, I cannot find Certs ANYWHERE in San Diego; what’s up with that?), my notebook, and a pen.

The green bag holds the Heather bag! And some diapers and wipes, and (right now) several packages of Smarties, and (when I need it to, which is often) Wonderboy’s medical file, and more pens, and yesterday there was one of Rilla’s shoes, but I don’t know anything about that. And ooh, just now when I was looking to see what it holds, I found half a package of Mentos. Score.

Now if you’ll excuse me, I have to go wash down my door.