Links for a Saturday

(Whoops, sorry for some duplicate link-posting. My Delicious plugin hadn’t been working so I manually posted links on Saturday. Now the plugin is working again and this autopost went up in the night.)

END_OF_DOCUMENT_TOKEN_TO_BE_REPLACED

What We’re Up to These Days

Besides doing as much of this as possible, of course. 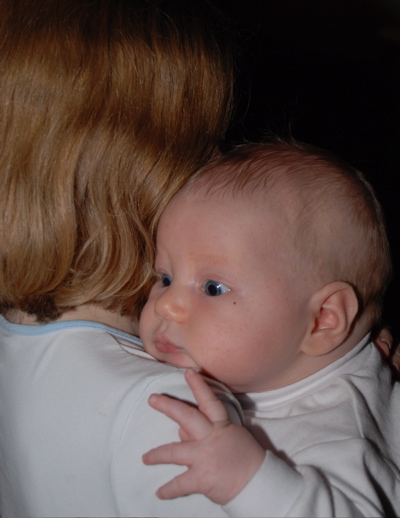 Jane is thirteen and busy, busy, busy. Art class, piano, ballet, Journey North, Shakespeare Club. The number of activities makes my head spin but is delicious to her. She’s learning her lines for a Taming of the Shrew scene. Mastering the jump attack in Zelda: Twilight Princess. Beginning to polish her repertoire for Piano Guild auditions. Enjoying the Think Piece questions from Julie Bogart’s Bravewriter Boomerang. (Today’s Murder on the Orient Express think piece led to a long and hearty discussion of the death penalty.) Reading all the Agatha Christie she can get her hands on (which, thanks to a kind librarian, has been a lot). Reading Jane Austen. Quoting articles from Muse magazine. Making dolls. Reading stories to Rilla at naptime. Plugging away at Latin and algebra. Baking cobbler when I’m too busy. Crocheting hair scrunchies by the dozen.

Rose likes life at a mellower pace. Her fiery personality adds enough spice to her life, I think. One by one, she has chosen to opt out of the activities her sisters enjoy. She still takes art and piano lessons, which seems like a lot to me, and is one activity more than Jane was doing at her age. She has a small vegetable garden out back, thanks to my mother’s labors during my postpartum days, and she spends a lot of time outside playing with bits of leaf and twig. She’s writing quite a bit: journal entries, stories, letters. Has been (like the others) glued to the Warriors books lately. Is deeply attached to her horse in Zelda. Clamors to be the one to hold the baby during his morning nap. Chops all my potatoes and onions for me. Still loves to play dress-up. Practices Amazing Grace on the piano ten times a day, as long as I don’t tell her to.

Beanie: busy bouncy Beanie! Loves to start her day with a snuggle on the sofa, just me and baby if possible, but she’ll make a space for the other wee ones if they’re awake. Just finished reading Understood Betsy; said it had a very satisfying ending. (I agree.) Loves copywork with a passion that is enchanting to behold (and mystifying to her mother, who loathes writing by hand). Doesn’t go to piano lessons any more (her class was canceled due to a drop in enrollment) but is learning here at home, with her sisters’ help. They’ve been through the book before her. Likes to fix my breakfast for me: a bowl of strawberry yogurt, almonds, granola. Wishes we had a trampoline. Is learning to draw in 3D from Mark Kistler’s book. Writes me coded messages. Wishes she got to hold the baby more. Wants to have a tea party with her friends: key event, facepainting. Is looking forward to receiving her First Communion. Can’t help being drawn into Little Bear when her younger brother and sister are watching. Wishes we had a pool. Forgets the job you gave her even before she’s out of the room. Is reading the Redwall books. Listens to Suzanne Vega every chance she gets. Spends long minutes smiling into the baby’s eyes. Says she doesn’t remember ever being cooed at before, and that being cooed at is the best thing in the whole world.

As for me, besides all the usual mom stuff, and the crammed-in-when-I-can writing stuff, I’m fiddling with fabric, working on a quilt square for the online bee I’m part of. And (as you know) I’ve been reading a lot lately. Not as much this month as I did in January, but then I’m on my own again as sole adult in charge. Last month I had my mom for two weeks and then Scott was off work for another two weeks. Nice. Now I read in the very early mornings and late at night—on the iPod, as often as not. I am finally, finally working my way through Ulysses. Very slow going, yes, but oh my what a treat. I find myself staring at single sentences, single words even, tasting them over and over, scarcely able to believe that they’ve been there all along, ripe for the picking. Warm sunshine merrying over the sea. Birdsweet. The void awaits surely all them that weave the wind. DailyLit tells me I am 4% of the way through the book. I can’t think of books in terms of percents, but I know I’m only just getting started, though I’ve been at it for weeks, a page or two at a time. Every few days I sit down with my big fat Ulysses Annotated

and unpack quantities of allusions, and then I have to go back and reread what I read before with better understanding. I am loving this.

Am also reading via DailyLit the YA thriller Little Brother by Cory Doctorow. I look forward to each night’s brief installment. There aren’t many books I would like to read this way, parceled out in small daily doses, but for these two—for dramatically different reasons—it’s working.

Have not yet finished rereading Portrait of a Lady, long way to go. Started Inkspell Inkheart right after Christmas and set it aside: still mean to finish that one. Have a TBR stack as high as the moon. You know how it is.

Well, that’s half the family. More than enough for one post, eh!

I Had No Idea

In the comments on the cobbler post, Andrea shared this nugget of information about making whipped cream:

“FYI: If you did ever overbeat the cream, thus turning it into butter? Just beat in some additional cream and it will magically turn back into whipped cream…”

That is so good to know. Who knew?

Busy, happy weekend with some of Scott’s family. Wish the rest of them could have been with us. His parents and his oldest brother flew in from the East Coast for the baptism and much merriment. Uncle Jay is one of the best guys I’ve ever met. Absolutely the most generous. My children are crazy about him, and there was much weeping following his departure this afternoon.

It had been too long since we last saw Scott’s parents. So nice to see them laughing it up with our noisy throng. Scott’s mother stood proxy for the dear godmother who lives far away. There’s a story behind that beautiful christening gown; we’ve been talking about it in the comments. Such an honor to have my children be part of its long history.

After they left this afternoon, I caught up a bit on blogs and tweets.

Look who else was baptized on Saturday! Beautiful.

Karen and Faith shared this link to Austenbook, which made me laugh out loud at least six times. Perfect timing, too. I just finished reading Pride and Prejudice. Again. Couldn’t be helped. I read Shannon Hale’s Austenland and, well, after that I had no choice.

Related: this time around, I read P&P on an e-reader. My iPod Touch, to be precise. It’s the third or fourth book I’ve read on the Touch, and this was the first time I found myself really enjoying the reading experience (as distinct from enjoying the book itself). I will always, always prefer a real book, the rustling paper, the satisfying weight of it, the smell of ink and tree. But…I admit it. There are some advantages to electronic reading. With my Touch, I can read with one hand, turning pages with the barest tap of a thumb. I can lie in the dark nursing the baby and read without any light source other than the device itself. Last week I tried to curl up with a nice fat library book beside my slumbering child, and I dropped the book on his head. You begin to see the advantages of a “book” no bigger than a playing card.

I’ve been experimenting with the various e-readers available for the iPod Touch and would like to post some reviews, but I’m too busy reading.

(No really, I’ll get to it eventually.)

Lots of friends have shared the scoop on these nifty Homeschool Connections online seminars. They are reputed to be extremely fun and informative. Great lineup of speakers.

I still haven’t taken my photos for the Illegal Books Meme, but lots of other people have. And I will, too, as soon as I get a chance.

Speaking of CPSIA, I really appreciate the post roundup in the Love2Learn sidebar.

Did you see Beck’s rant about The Ten-Year Nap, that book that so annoyed me last month? Beck too, and she didn’t even have to read it:

(Do my) mundane daily routines and ever-more tenuous connections to increasingly independent children compensate for all that lost promise? asks the Publishers Weekly blurb on Amazon’s page for The Ten Year Nap. And then I barfed, or I WOULD if I wasn’t in some sort of decade-long coma, apparently.

If Beck lived in SoCal instead of Canada, I would totally make her a cobbler. 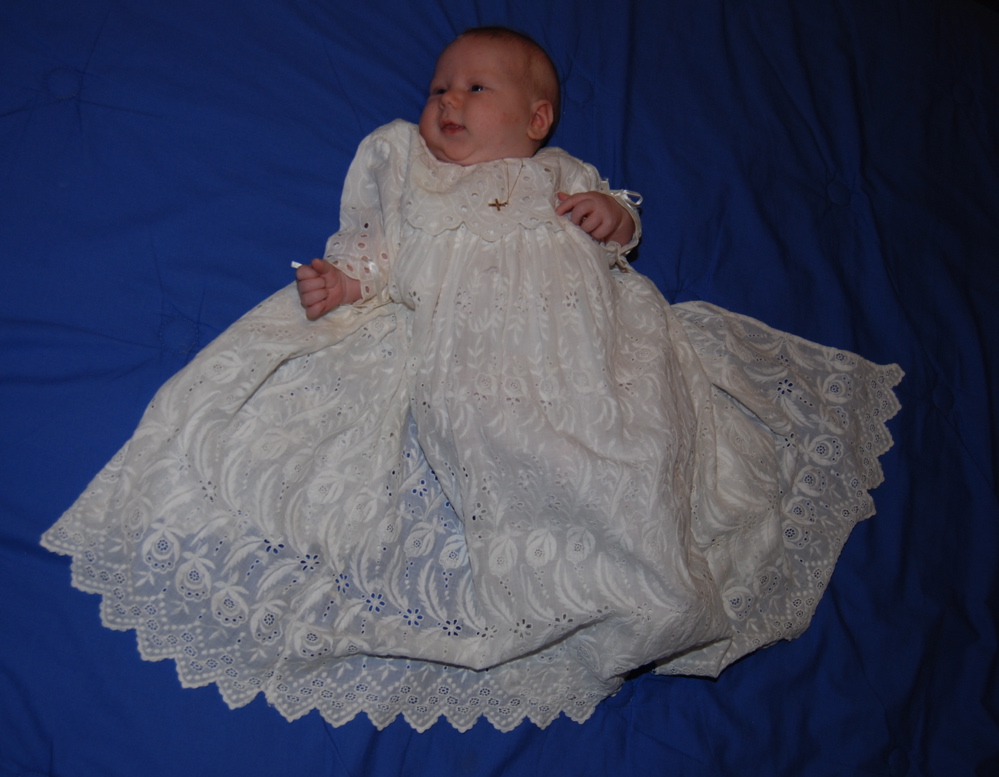 END_OF_DOCUMENT_TOKEN_TO_BE_REPLACED

A few peeks from our week… 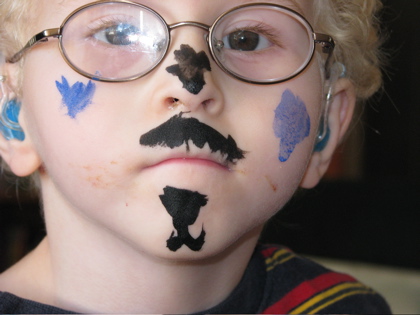 Guess whose big sisters got hold of him? He may have the villainous beard, but they’re the ones with nefarious purposes. 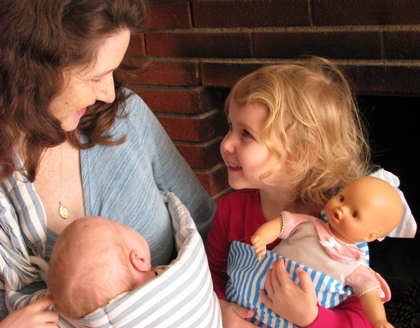 Rilla needed a sling to match mommy’s. Mine, by the way, is now serving its sixth baby! I’ve had it since Jane was a bairn. 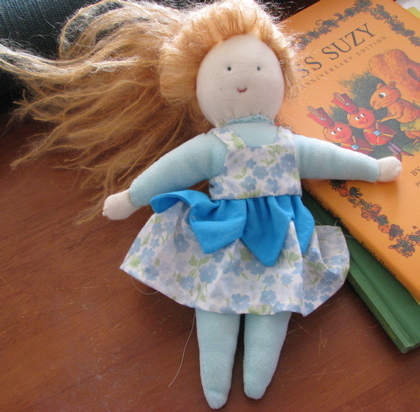 I am in love with this sweet dolly. Jane made her for Rilla, totally by herself. I want a big sister like Jane.

(Psst DHM and Mama Squirrel, thanks for reminding us of our dear Miss Suzy! Rilla had not met her yet…)