Another week full of drafts and snippets, words squeezing into the teasing interstices of busy days. Most of what I jotted down had to do with the subjects that got their hooks into us: a chronicle of paths wandered, links explored. 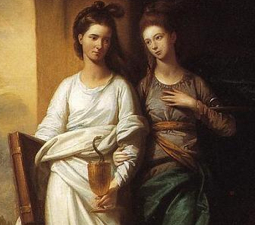 During our Balboa Park day last week, Jane strolled through the Timken Museum of Art. One piece she found particularly compelling was Benjamin West’s Fidelia and Speranza, painted in 1771. West was a friend of Benjamin Franklin (his portrait of Franklin’s famous moment with the key and the kite is a hoot). Jane was struck by the image of the girl (Fidelia) holding a chalice with a serpent looking out from it. A little digging informed us that the sisters are figures from Spenser’s The Faerie Queene: Faith and Hope, who reside in the House of Holiness to which Una (Truth) guides the Red Cross Knight.

XII
Thus as they gan of sundry things devise,
Loe two most goodly virgins came in place,
Ylinked arme in arme in lovely wise,
With countenance demure, and modest grace,
They numbred even steps and equall pace:
Of which the eldest, that Fidelia hight,
Like sunny beames threw from her christall face,
That could have dazd the rash beholders sight,
And round about her head did shine like heavens light.

XIII
She was araied all in lilly white,
And in her right hand bore a cup of gold,
With wine and water fild up to the hight,
In which a Serpent did himselfe enfold,
That horrour made to all that did behold;
But she no whit did chaunge her constant mood:
And in her other hand she fast did hold
A booke, that was both signd and seald with blood:
Wherin darke things were writ, hard to be understood.

XIV
Her younger sister, that Speranza hight,
Was clad in blew, that her beseemed well;
Not all so chearefull seemed she of sight,
As was her sister; whether dread did dwell,
Or anguish in her hart, is hard to tell:
Upon her arme a silver anchor lay,
Whereon she leaned ever, as befell:
And ever up to heaven, as she did pray,
Her stedfast eyes were bent, ne swarved other way.

Well, that led to a lot of Spenser-related digging. We can’t undertake to read much of Faerie Queene right now; we dove into The Odyssey this month and I think one epic poem at a time is enough! 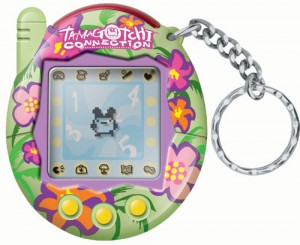 The week’s other big research project (for various children) had to do with Tamagotchis—the craze has resurfaced here, after a year of dead batteries. Growth charts, game strategies, daily logs: it’s like living in a research lab. One of the sites that turned up on our search was this critical analysis of Tamagotchi use, which I found quite interesting, especially this bit:

I was reminded of Professor Ken Goldberg’s Tele-garden, a web-based project where users can plant and water seeds in a small garden through the use of a remote robotic system. In a presentation on the project, Professor Goldberg mentioned a shift from the Paleolithic Hunter/Gatherer state of the World Wide Web (brief forays into the world of technology for the purpose of apprehending some piece of information) and the Neolithic Husbandry model supported by the project (where users must devote sustained interest and effort to foster growth).

The Tamagotchi is indicative of a similar shift in video game modeling. The majority of video games (especially popular video games) hinge on a model of conquest and succession – temporally limited tasks with set goals attainable through skill and reflexes. Key examples range from Pac Man and Galaxians to Super Mario Brothers and Mortal Kombat. Player/users identify with the “main character” of a simple narrative – “destroy or be destroyed”. Having completed a set amount of destruction, the player/user rests for a moment before taking on a progressively difficult level.

Notable exceptions exist. The most popular of these is the Maxis line of Sim- products, including SimCity, SimCity 2000, SimEarth, SimAnt, and others. Here we see the stirrings of the “Neolithic shift”. The user is responsible for the growth and maintenance of a town (or world, or ant colony, or whatever) and the ultimate goal is to simply “flourish”.

What do you think? Do you prefer Hunter/Gatherer internet experiences, or Neolithic Husbandry?

Speaking of hunting, I fell into a research project of my own last night, as you know if you’re my friend on Facebook or Twitter (which seems to be a synthesis of the hunter/gatherer and husbandry models, if you ask me). For fifteen years I have wondered which version of the Te Deum was the one referred to by Sheldon Vanauken in A Severe Mercy. Vanauken writes:

St. Ebbe’s sang the Te Deum to a setting that made a triumphant proclamation of the line: “Thou art the King of Glory, O-O-O-O-O Christ!”—the O’s ascending to the mighty ‘Christ!’

St. Ebbe’s is the Anglican church in Oxford the Vanaukens attended around 1950. Between YouTube and ChoralWiki, I have investigated, well, scores of scores (ba dum bum), looking for that particular setting of the Te Deum. A commenter at the MusicaSacra forum suggested it might be Benjamin Britten’s Festival Te Deum: that’s the only score I’ve found that has ascending O-O-Os, so perhaps he is right.

Here it is on YouTube, performed at the University of Utah. I must say I’m partial to the setting in C major by Charles Villiers Stanford. The Elgar, too, is lovely and stirring.

But most lovely and stirring of all is this piece a Twitter responder reminded me of: not the Te Deum, but rather the Non Nobis. I remember how I was moved to tears by this music (and this scene) when I saw Branagh’s Henry V several years back. I meant to buy the soundtrack (score by Patrick Doyle) but forgot all about it. How is that possible? This—this is unforgettable.