Because I have email addresses for both my married name and my pen name, I wound up with two Google Reader accounts, which of course got to be unwieldy and silly. So I merged them. 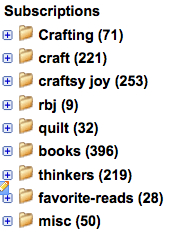 “RBJ” stands for “Rainbow Jane,” which is a kind of quilt. So that makes, yes, FIVE handcrafts-related folders between two accounts. What is wrong with me??

Imagine if I stopped reading crafty blogs—with all that extra time I bet I could make something, like, say, a quilt.