If you read a girl a story… 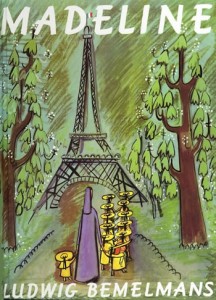 …she will want to go to Paris so she can tell the tiger, “Pooh-pooh!”

You will tweet about it and get an email from a friend, introducing you to a new friend who is exploring Paris with her own young daughter and blogging the whole thing in a most delicious manner.

Your little girl will ask for the same story the next day, and the day after, and on one of these days she will pore over the page where the “twelve little girls in two straight lines” frown at the bad thief, and she will furrow her brow and say, “But how can there be EVIL in PARIS??”

She will want to know all about appendectomies and scars and boarding school and more about appendectomies and the function or lack thereof of the appendix and other internal organs, and when you explain about liver and heart and lungs, she will want to know what lungs do, and when you explain about breathing, she will say, “OH GROSS!” and you will think she means lungs but it’ll turn out she means AIR goes in through your NOSE, that’s DISGUSTING!

You will demonstrate that breathing through her nose is something she does all the time, quite unconsciously, and then the two of you will lie on your bed snorting air in and out your noses, laughing hysterically along with your teenaged daughter who happened by in time for the demonstration.

You will come to the end of the book and your little girl will want to hear it again, and again, and again, every day for a week or more, and this will be just fine with you, because you learn something new every single time.