We spent the better part of the week outside working on the flowerbeds, and since this blog is the archive of what-I-was-doing-when, I like to file my garden notes here.

Photos from April 22nd, after we did a flowerbed cleanup (pulled out a year’s worth of bermuda grass, planted some seeds and annuals and a new lavender to replace some things that died over the year). Lots of lettuce ready! Need to eat more salad! After this photo was taken, we did more weeding, rearranged hoses, moved the morning glory (behind lettuce on right) closer to the wall (cement wall to right of photo), planted sunflower seeds, and planted a watermelon seedling in the front of the bed near the nasturtium. A view from the veggie patch looking down the length of the flowerbed. The far corner has become something of a shade garden because the neighbors’ trees have gotten big. Foreground moving away: nasturtiums, salvia, ice plant, cape honeysuckle (the huge flowering shrub, orange flowers), pink geraniums.

For contrast: here’s what this space looked like three years ago. 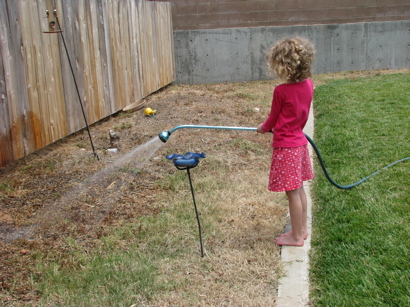 June 2008, looking the opposite direction. The lettuce patch above is in that wall/fence corner now.

When I rearranged the hoses later in the week, I made a loop go through the bare mulch part of the nasturtium patch in the foreground. I think we planted some of the flower seeds from the kids’ Easter baskets there, but I’m not sure. We did plant zinnia, cosmos, bachelor’s button, and morning glory farther down the bed toward (but not IN) the shady corner, and a few more sunflower seeds along the back fence where they came up so beautifully two years ago. Oh, and it was CANTELOPE seeds we planted near the nasturtiums, now I remember. The redug/replanted area to the left of the cape honeysuckle and butterfly bush. There had been a large semicircle of stones sort of where the hose is. They were thick with bermuda grass so I heaped them in piles as we yanked the weeds. Some are still in piles. 🙂 We planted the new lavender (above Huck’s head with a new arc of stones), some poppies, moss roses, a fuschia, impatiens, and the aforementioned flower seeds. That’s a bougainvillea on the back fence with the bare lower stalk and new green growth at the top. It’s usually in flower this time of year, dunno what’s wrong this year. This pincushion flower was a giant clump two years ago. Now just some stragglers, but still one of my favorite things in the garden, especially contrasted against the orange and yellow nasturtiums (to its right) and the cape honeysuckle (left).

April 25. Milkweed is blooming (far right above R’s wrist) and Rose rescued a tired monarch. I know I posted these photos already but it’ll be nice (for my later reference) to have them here in context.

Later in the week, starting Tuesday the 26th I guess, we tackled a woefully weedy flower bed in the front yard. Very small bed bordered with bricks that you could hardly see under the bermuda grass. Rose & I pried them all up, yanked the weeds, returned the bricks to their places, added compost, and planted a few (small, cheap, easily movable if necessary) things: the rest of the flower seeds, some sweet alyssum plants, a yellow daisy. I discovered that the boysenberry plant in my big gray planter—the planter was a gift from my Shakespeare Club kids a couple of years ago—had rooted itself a runner by the house wall–neat!

We also uprooted all the weeds in the backyard strip along our neighbor’s cement wall. It’s ready for planting now–more sunflower seeds, I think. Busy week!