She holds up her wrist, clinging to which is a small furry brown bat with tiny magnets in its wingtips. We were digging through a box of toys in the garage this morning, looking for my old Smurf collection; Rose found the mushroom house in the girls’ closet and wanted to populate it for Rilla. The garage search produced only the baker Smurf—and, it seems, the stuffed bat. For today, at least, Smurfs have been forgotten.

Well, a bat mood. I can accommodate that. I went hunting for our copy of Stellaluna but didn’t find it. (You may detect a pattern here.) However, there on the shelf was Randall Jarrell’s lovely fairy-story, The Bat-Poet. Even better. Rilla propped her wrist on the arm of my rocking chair so her little bat could see the pictures—such delectable ones, drawn by Maurice Sendak.

Once upon a time there was a bat—a little light brown bat, the color of coffee with cream in it. 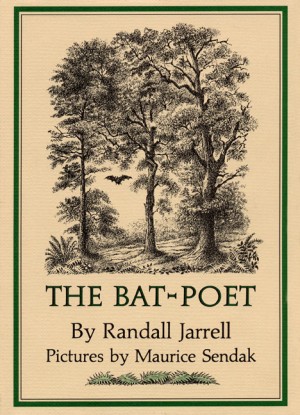 We didn’t get far, for after only a few pages, Rose and Huck returned from a walk around the block, and he had treasures to bestow. A rose petal for Rilla, a large smooth stone for Wonderboy, and a yellowed magnolia leaf for me. He could hardly hand them over fast enough: he needed his hands free to sign cat whiskers. My children measure their walks in number of cats encountered. This was a three-cat morning, a very good day.

Rilla’s bat had things to tell Rose, who is extremely receptive to the confidences of small animals in the hands of small children. Rilla showed her The Bat-Poet, and the opening line reminded Rose of the Little Brown Bat entry in the Handbook of Nature Study. The three of them—big girl, little girl, stuffed bat—looked at the pictures in that book for a while, and then it was cast aside and Rose began to spin a story: the first installment, I’m told, of The Bat Chronicles, about a little girl named Batty (inspired by The Penderwicks, of course) who rescues a lost bat named Bitty. I was eavesdropping like crazy, but then Wonderboy wanted his daily Signing Time, and the Bat Chroniclers moved to their bedroom.

And now the boys are watching Zoo Train, and Jane is running her lines for our upcoming Twelfth Night performance, and Beanie is lying on her bed listening to Suzanne Vega.

And in case that all sounds too idyllic, I should mention that my sink is full of breakfast dishes, and my floor is carpeted with cracker crumbs. There is a mountain of paperwork on the table behind me. I should be doing housework but sat down to write this post instead.

P.S. Thank you for your questions and comments on the open thread. I am so enjoying them and should have a chance to answer some of this afternoon. And I have a question of my own for another post. I’m really stealing these minutes right now—it isn’t my usual blogging time—but I wanted to capture the morning before it slipped away. Signing Time is almost over, so writing time is too!

Related post: “He imitates the world he drove away…”