Why I Read So Slowly 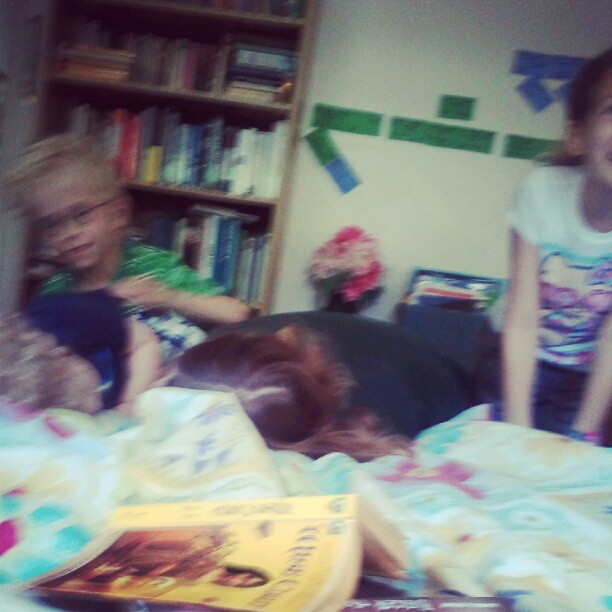 10:15 a.m. The Saturday-morning breakfast rush is past and I’m ready to dive back into the Book Challenge. My 48 hours are ticking away rapidly. I pick up Wise Child, a book I’ve been hankering to reread and which happens, serendipitously, to be the June selection for the Wisteria & Sunshine reading circle—a fact I discovered just minutes ago. I’d been rooting for it.

“You’ve got hiccups?” I echo, putting down my book.

“To the kitchen.” Hiccup. “Me hungry.”  Hiccup. “Hurry before another ’cup comes.” Hiccup.

He’s hungry. He has spent the last two hours eating.

He points at the package of animal crackers on the counter. “Me need some.” Hiccup.

My book beckons. This’ll buy me five minutes, at least. I dole out a generous handful. I’m back in my room before he’s polished off the first elephant.

10:19. Yes, really. Wonderboy appears in the doorway bearing a huge grin and a new book. My book, in fact. It’s the unbound preview of Fox and Crow Are Not Friends that my editor sent a few days ago. I am always an easy mark for a child’s read-to-me request. When the book in question is one I wrote? Fuhgeddaboudit. I pat the bed beside me. My boy clambers up. Huck joins us midway through Fox and Crow’s first fight, wiping lion crumbs off his face.

10:29. We’ve finished the book. I can’t help but note the discrepancy between the time it takes to read an early reader (ten minutes) and the months I spent laboring over it. But the kids laughed at all the right bits, so my efforts have been amply repaid. The boys migrate toward the foot of the bed; Huck begins wrestling an invisible opponent—perhaps the ghosts of the menagerie he has so recently devoured. I reach for Wise Child once more.

10:29 and 30 seconds. Enter Rose and Beanie. Beanie is brandishing a fat Heroes of Olympus book, groaning in melodramatic anticipation of finishing it shortly and then having to wait until October for the next in the series. Rose warns her against continuing. She’ll regret it, cliffhanging all summer. Beanie points out this is her second time reading the book. She’s been in the delicious agony of suspense for months already.

Huck has noticed that his sisters are somehow failing to focus all their attention on his antics. He steps up his game: he’ll be the lion now, up on all fours, crushing my foot beneath his terrible lion-paw knees, lunging forward to butt heads with Rose. Er, so maybe he’s a goat. My quiet reading haven has become an arena, where the roar of the crowd comes in guffaws, and the defeated lion-goat flops limply on his back in an unnervingly realistic faux death. Even Scott, passing through to deliver clean towels to the bathroom, is impressed by Huck’s convincing corpse impersonation. He stops to admire and prod—and pounces, roaring, on the lion-goat’s exposed underbelly. The girls and Wonderboy are shrieking with laughter. Wise Child falls off the bed.

10:47 a.m. The vanquished lion-goat resumes boy form and trundles off, possibly in search of a bear or zebra to eat. Feigning death works up an appetite. The other kids drift out. Nope, Beanie’s back; she’s curling up beside me, her book open.

“Mom, want to see yet more evidence of why Rick Riordan is a genius?”

10:56. Beanie returns her attention to the book. Here’s my moment. I retrieve Wise Child from under the bed and brush off a dust bunny. Where was I?

10:57. I sigh, push the book away, reach for my laptop. This time I can’t read because, it turns out, I have a pressing need to write. I open WordPress, click “Add New Post.” Why I Read So… 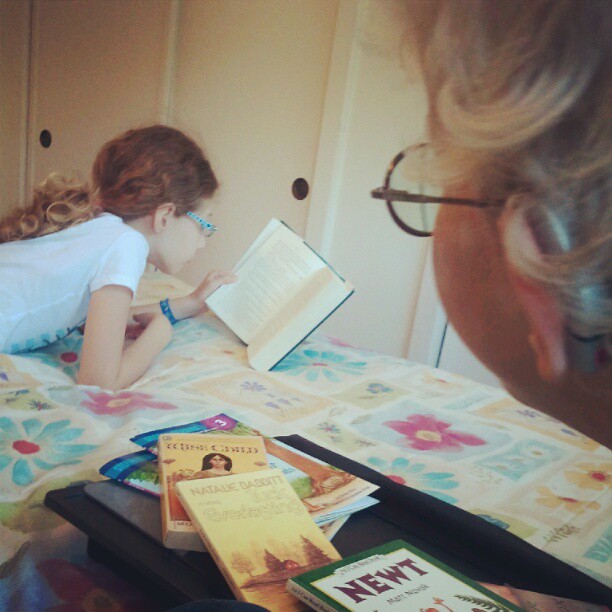 At least Beanie can concentrate on her book.

P.S. In the 48 minutes it took me to jot this down, I’ve intervened in two kid squabbles, devoured half a leftover Thai peanut noodle salad, enjoyed Jane’s photos of the Colorado River on my cellphone, admired no less than eleven identical LOST signs for a fake credit card Rilla is desperately seeking, and listened to half a dozen extracts from Let’s Do Nothing, whose art Rilla correctly identified as the work of Bink and Gollie illustrator Tony Fucile based on one character’s facial expression—an observation that so intrigued me I had to confirm it on the Google. This is why reading isn’t the only thing I do slowly.