Oh how I love me a makeover. 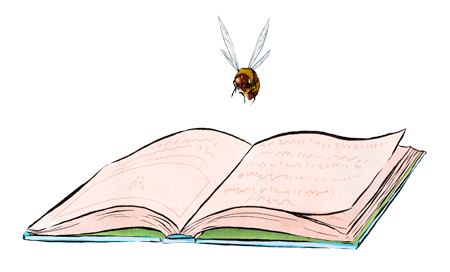 With a trio of new books coming out in just a couple of months, it was high time I overhauled my website. I loved my girly pink home page, but it didn’t exactly fit Fox and Crow and Inch and Roly, you know? Thanks to Emily Carlin of Swank Web Style and my genius artist friend Chris Gugliotti, who drew the swoony bee illustrations you’ll see all around the site (including this little bookworm bee, whom I adore), my internet home base has a brand new look.

Unlike the big changes we made to the rest of the site, we kept the new blog design similar to the original. Mostly I wanted more room to stretch out in this text column. Now I’m itching to go back and resize all my photos. All. Ha! Seven and a half years’ worth, now. Methinks some of them will just have to stay small.

Tinkerer that I am, I’m sure I’ll be making lots little tweaks and adjustments over the next few weeks. (Especially to the sidebar. I have many plans for the sidebar.) If you spot anything wonky, do let me know. Emily did a check across many browsers, but sometimes things look different on different systems.