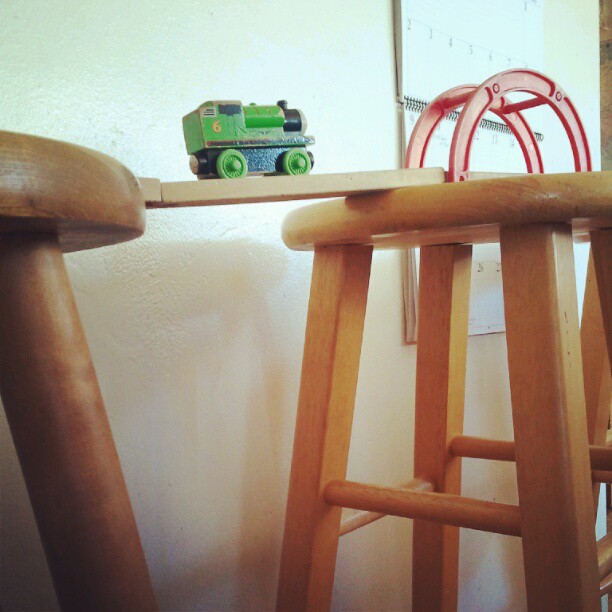 A momentous occasion today: Rilla’s first official high-tide morning. Of course she’s been swept along in the family currents her whole life, but today was special. I went around the house pulling out all the good old books I read with her sisters at her age: Just So Stories (she’s heard a few already), The Blue Fairy Book, Fifty Famous Stories Retold, the James Herriot Treasury for Children. Such happy memories these tomes call up! We began with D’Aulaire’s Leif the Lucky: I knew she’d like the art. And the map. She asked for the globe, which came apart from its stand last year, and cuddled it on her lap while I read, stopping me so she could trace Eric the Red’s path from Norway to Iceland to Greenland with her finger. “Whoa, three MILES, Mommy.” It took me back to our Mr. Putty days. He may have to be resurrected.

Of course, I read stories to her every day of the week, and there’s no reason other than family tradition to call this morning’s read-aloud “high tide.” But it’s a dear tradition to us and she was beaming her gappy six-year-old grin at taking her place in the spotlight.

I used to waffle about methodologies: was I a Charlotte Mason homeschooler? An unschooler? Something in between—eclectic, perhaps? But it was all just groping for a label—and not even a label for my kids; it was about how to characterize myself in conversations with other homeschoolers, so that we might better understand one another. All the while, my kids and I went on simply doing what worked for us. If something stopped working, we did something else for a while—usually this has meant facilitating a child’s need to immerse deeply into a single passion or pursuit. I grok that; it’s how I love to learn, too. This blog is a chronicle of my own sudden immersions, some of them finite, some recurring at intervals: breadbaking, gardening, sewing, Irish pennywhistle, British period drama…it’s a long list. My kids have lists of their own, each one different, some interests overlapping.

Always, always, after one of these immersions, the diver comes up for air eventually. And there’s a restlessness, a pacing at loose ends, that has, for us, always been cured by a return to morning lesson time. Rose has told me she likes having the structure there to push against: knowing there are things she is expected to do fills her with ideas for things she longs to do. One of my jobs is to keep ears open for the longings, and drop resources and opportunities in her path to help her realize them. I love that part of the job.

I love this part, the high-tide part, too. Rilla, an extroverted child, delivered her first narration with glee. I explained that some mornings, one of her sisters will read her a story, and she’ll come tell me all about it.

“That’ll be my favorite part,” she said, matter-of-factly.

Some days, it will. 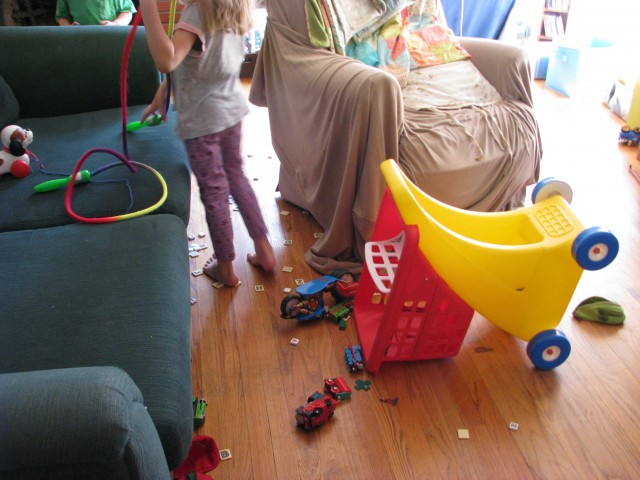 What the house looks like after a high-tide morning.

I should have been a librarian

We’ve spent the weekend rearranging our bookshelves, a task long overdue. Every couple of years I go through and reshuffle books from one room to another, grouping according to the way we use them. Historical and realistic children’s fiction in one bank of shelves, kids’ sci fi and fantasy in another, nonfiction here, poetry there, and so on. Scott’s collection of composer biographies and music criticism used to have its own shelf, but those books have migrated all over the house because he reads in every room. Picture books have the most migratory habits of all: they’re everywhere, stacked on the hearth (it’s San Diego; in six years we’ve never lit a fire), crammed into baskets, piled beside beds. Most of them have a permanent home in the Rose-Beanie-Rilla room, but the lower shelves of almost every bookcase in the house (we’re upwards of two dozen now) are dedicated to overflow picture books. You never know when you might need to stop folding laundry, eating, or sleeping to read Caps for Sale.

Now that we’ve reassembled the historical fiction collection comes the really fun part—arranging them in chronological order. I utter that sentence without a trace of irony. If I ever got a tattoo (which I won’t, because needles), it would have to say BORN TO CURATE.