Down here all the fish is happy

We forgot to read a book today! Rilla was busy drawing all through the early part of the morning, and then we worked in the garage for a while, digging out the Christmas things and filling some boxes for a garage sale our circle of friends is having this weekend—a fundraiser for a family who is adopting the dearest little newborn girl.

The big laugh of the morning came when we found, shoved behind other boxes, an unopened box from our move here six years ago—all taped up, marked in my friend Lisa’s handwriting “Ugly Bat Thing.” A skeletal metal bat someone gave Scott as a gift to celebrate his days editing, and then writing, Batman comics. Then proceeded a spirited debate over whether it is, in fact, ugly. (The six-year-old votes no, emphatically.)

Earlier, and I shared this on Facebook at the time but I have to archive the moment here, I was sitting in my rocking chair when Rilla came sprinting into the room to ask what color hair I would like if I didn’t have brown. Easy one: red. She darted away. Back again a moment later with this question: “If you were a mermaid, would you want to wear a shirt? Or be like a real mermaid. You know, bare.”

I asked if a seashell bikini were an option, but nope. Six-year-olds can be very strict. You want to be a real mermaid, you gotta go for broke. I, however, made the mom choice and requested a t-shirt.

She roadrunnered away. Back again a bit later: “What’s your favorite underwater animal?” Easy one. I didn’t read Ring of Endless Light eighteen times for nothing.

Off again, zip-tang. A little later, I got to see (at last) what she was up to. 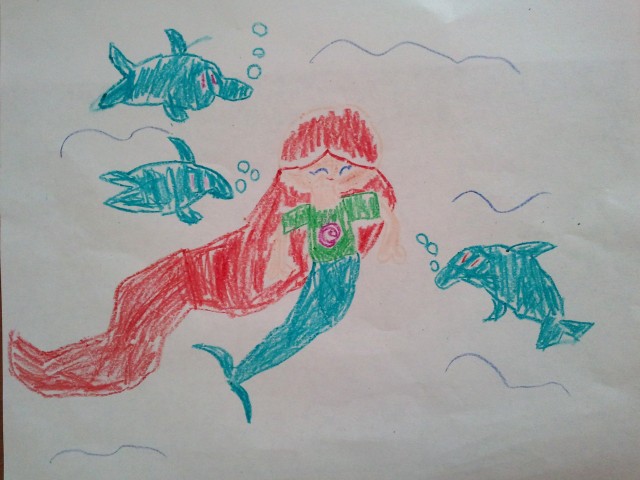 This portrait, I learned, was part of a set: here are the four girls. Rose hates swimming, so Rilla made her an elf. 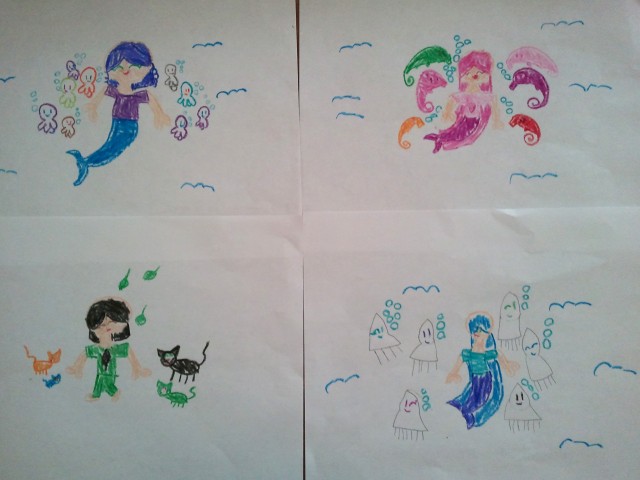 The jellyfish kill me.