The sun was shining on the sea

Much better today, but still dragging. And the next domino to topple turned out to be Huck. 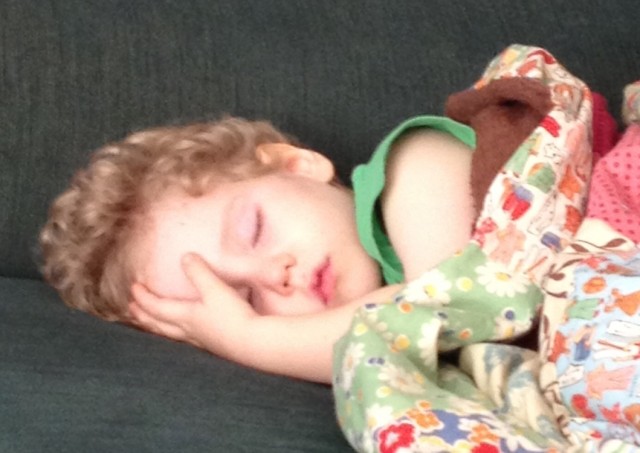 Still, it was a good day, dominated by much laughter over this Grimm collection we’re reading en masse for Jane’s Coursera class. I mean, “The Death of the Hen,” do you know that one? I know Grimm is grim, but this beats all. All the rest of the day, the girls were walking around going, “And so they were all dead together”—that’s the happy ending, you guys.

Other bits and pieces:

Read more of Hawthorne’s Wonder Book with Rilla, the Perseus story continued, and then coaxed her through a narration. No matter how unschoolish my tendencies, I am always and forever a believer in good old Charlotte Mason-style narration for building really quite remarkable powers of attention and memory. Rilla’s at the bouncy, fidgety, doubtful-of-her-narrative-abilities six-year-old stage, which—now that I know what I’m doing—is quite a fun place to be. She surprises herself, and then beams.

Beanie did a lot of German (I slacked on that today myself, but I’ve been driving pretty hard with it the past few weeks and am thrilled to be able to read, at long last, a little book I picked up ages and ages ago—found it in some German bookshop in Manhattan, I think—called Kleiner Pelz. Anyone heard of it? The author is Irina Korschunow. Quite sweet so far.

I read Ame Dyckman’s Boy + Bot to Huck; he’s gotten almost every one of us to read it to him so far, a tremendous hit this one, and rightly so. Delightful. But then we’re huge fans of Dan Yaccarino’s art around here. Here’s the book trailer if you want a peek.

We listened to more Wind in the Willows while Rilla drew pictures and Huck snoozed…I dozed off myself somewhere in there. Later, walking to pick Wonderboy up from school, I taught Rilla the first two stanzas of “The Walrus and the Carpenter,” and there is nothing quite like the sight of a small girl skipping up a hill, hair swinging, reciting “And this was odd, because it was the middle—of—the—night!”

Jane wrote an essay for her class, Rose read all morning, Huck perked up a little, and Scott concocted a bacon-potato soup for dinner.  A much happier ending than that which befell the poor hen.

“The Death of the Hen,”
from Lucy Crane’s Household Stories from the Collection of the Brothers Grimm,
illustrated by Walter Crane