“Where’s Papa going with that ax?” 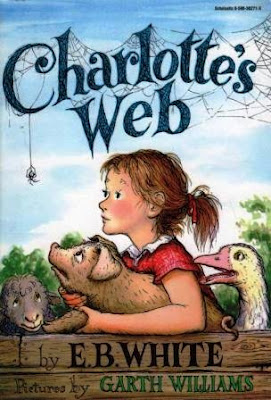 One of the best opening lines ever. How many times have I read it, I wonder? And how many times aloud? This morning it was to my three youngest, all of us smushed together in a heap on the bed. We’d surprised a hundred tiny spiders in the garden just a little while earlier; an egg sac must have hatched only moments before I happened to rip out the weeds hiding it against the garden wall. Wee spiderlings scattering in all directions. “They’re jumpers!” cried Rilla, watching them leap into the breeze.

Of course we had to come in and begin Charlotte’s Web after that. How could we not?

That first concise chapter: a marvel. The jolt of that opening. A father going to kill a baby pig. Fern standing up to her parents, first her mother, then her father—pulling at his ax, even. And—he listens to her. Is moved by her passionate plea for justice. Gives in. And then the magic of a piglet you can cradle in your lap like a baby and feed a bottle to. Even an obnoxious older brother getting a mild comeuppance. Utterly satisfying. And all in seven pages, before breakfast.