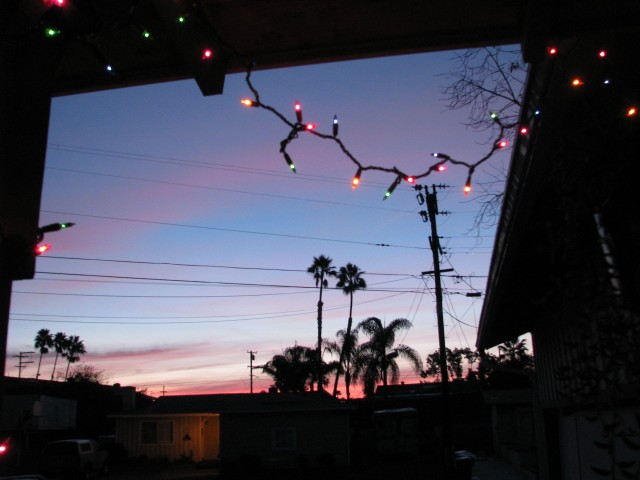 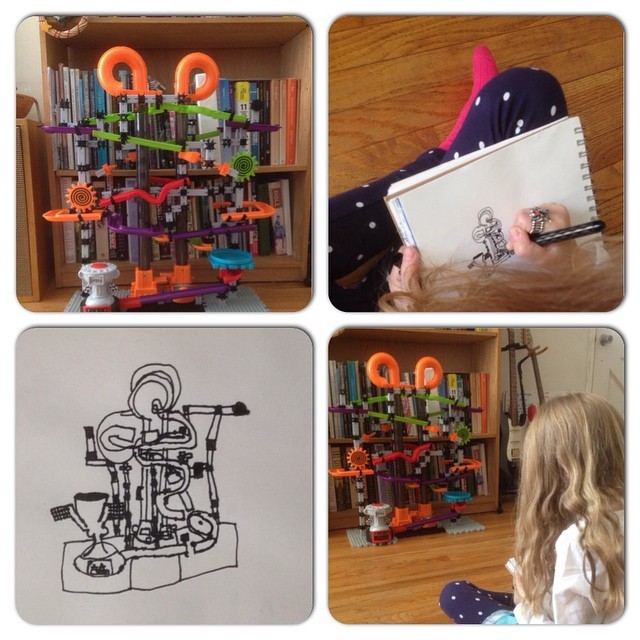 Rilla and I have been trying to work in our sketchbooks daily. I feel brave when I tackle a subject like my stapler or a piece of fruit, and then I watch her casually sit down and commence drawing something massive and complicated with utter confidence. She is dauntless. I am inspired.

Season 5 trailer for those who watch previews. Personally, I’m allergic to them.

Today feels like the weekend and I keep having to remind myself it’s only Wednesday. Guess I’m a wee bit excited about the return of Downton Abbey. Yes, I’ll be recapping the episodes again. Here’s my master list of recaps from previous seasons, if you need to brush up. 🙂

Mental Multivitamin has posted her annual reading review, a post I always look forward to. In it, she mentions the 52 Books in 52 Weeks site, on which I’m a longtime lurker. I’ve never officially participated in that reading challenge but I’ve played along quietly from home. 🙂 Here’s the Mr. Linky for 2014’s participants: 52 Books in 52 Weeks: 2014 Year End Wrap Up.

I like the questions posed by 52 Weeks hostess, Robin McCormack:

How many books did you read and did you meet your own personal goal?
Most thrilling, oh my goodness, I want to read it again, unputdownable book?
Top 5 favorite stories?
Least favorite book?
New author discovery? New genre discovery?
What countries or centuries did you explore?
Share a favorite character, story, quote or cover
One book that touched you – made you laugh, cry, sing or dance.
Are you ready to do it all over again?
Do you have any goals to check out different genres or authors, read translated books or stories in another language for 2015?

I may take a stab at answering these myself, but I think I’ll wait until after the first of the year when the Cybils shortlists have been announced. Some of my answers might be too revealing. 🙂

Another kind of book report I always look forward to is Julia Sweeney’s monthly recap. (She discusses movies as well.) Here’s her most recent. Like Mental Multivitamin, Julia’s blog poses a threat to the structural integrity of my shelves. (And my wallet.)

Another book challenge I quietly participated in this year was the 20th Century Reading Project. My ongoing list is here. Green entries were read in 2013; black in 2014. I haven’t updated it in a while, having spent the past two months exclusively reading young adult realistic fiction published between Oct 15, 2013 and Oct 14, 2015. (How’s that for specific?) When I get a chance, I’ll bring the list up to date and pick a new color for 2015 entries. I plan to continue this challenge at a casual pace until I’ve read a book for every year, no matter how long it takes. I’m enjoying seeing the clusters of books, such as the three (very different) novels published in 1963 I read in 2013, quite by chance.

Bonus book report: What Charlotte’s kids got for Christmas! Her kids and mine have kindred tastes in books, so it’s always fun to see what she came up with.

If you’ve got a reading recap to share (yours or anyone’s), please leave the link in the comments. I’m a junkie for these things—and coming off the Cybils, I’m way behind on blog-reading!

Sometime in October or November, I abandoned hope of keeping my sidebar booklog up to date. By then I was deeply immersed in reading YA Fiction for the CYBIL awards. Between 10/15 and 12/26, I read a total of 78 nominees. (In yesterday’s post I said 79. Counted wrong!) Ten of those titles are listed below, but the other 68 haven’t made it into this compilation yet. Was too busy reading to fuss with links and things. Eventually I’ll get them listed here. For now, I’m pulling the January-October(ish) list into this post to serve as my master book log for 2014. Time to wipe the slate clean for 2015!

Some of the links below go to GoodReads; others are Amazon Affiliate links because I have a hundred* children to put through college. You understand.

This list goes backward, with most recently read titles first. If I manage anything new before the end of the year, I’ll update this post. High high high on my list is Sarah Elwell’s novel, Deep in the Far Away, which she published as a serial these past few months. I subscribed eagerly and would have loved to enjoy it in periodical-fashion but the timing coincided with the Cybils onslaught. Also enticing: the prospect of another Forster binge (I know, I know, it’s only been six months since the last one) and maybe some Patricia McKillip. Heir of Sea and Fire jumped off the shelf at me yesterday and I thought ohhhh….(I think that one’s my favorite of the Riddle Master trilogy.)

A final note! I hope to come back here and add commentary to some of the entries below, or links to posts about them. But for now I just want to move the list out of my sidebar. 🙂

117. Matilda (audio with Rilla while we draw—we’re midway through as of this post but I expect we’ll finish by New Year’s)

Kortney tweeted me about this book, which she correctly pegged as being right up my alley. She caught me at the perfect time, with birthday money from my parents burning a hole in my pocket! And ohhh was she ever right. Utterly marvelous. Inspirational. Possibly life-changing (if only because I was already itching to head in this direction, having so recently resolved to make art journaling and sketching a daily practice).

48-115 (if my math is right): 68 young adult novels to be listed later. So many good books!! (Other Cybils nominees are starred below—some read earlier in the year before they were nominated.)

UPDATED TO ADD: 47. The Madwoman in the Attic: The Woman Writer and the Nineteenth-Century Literary Imagination

(I read about half of this 768-page tome in 2014 and decided that’s enough to warrant inclusion in this list, especially since it inspired numerous lecture-watching rabbit trails, including this excellent talk on George Eliot: Intellect and Consciousness by Catherine Brown of Oxford. Perhaps I’ll finish next year the tome in 2015.)

35. Charlie and the Chocolate Factory

30. The Importance of Being Earnest

26. The Life to Come and Other Stories

19. The Wheel on the School

13. Where Angels Fear to Tread

10. Howards End Is on the Landing

6. The Duchess of Bloomsbury Street

1. The Fault in Our Stars

As of this moment, my 2014 Cybils work is done. Well, except for hauling a metric ton of books back to the library. Whew!

Since October 15th, I have read 79 young adult novels. Seventy. Nine. So now you know why this blog has been so quiet. But ahhhh, here I am, ready to settle back in and, you know, put the B in CYBILs. (Children’s and Young Adult Blogger Literary Awards.) Consider yourselves warned. 🙂

For now, though, today, the day after Christmas, I’ll content myself with a few thousand words’ worth of pictures. 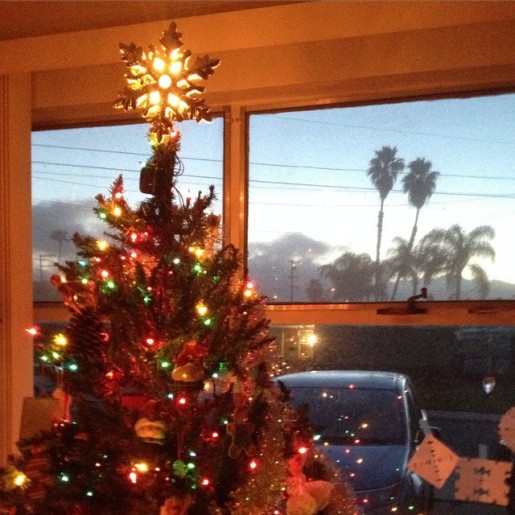 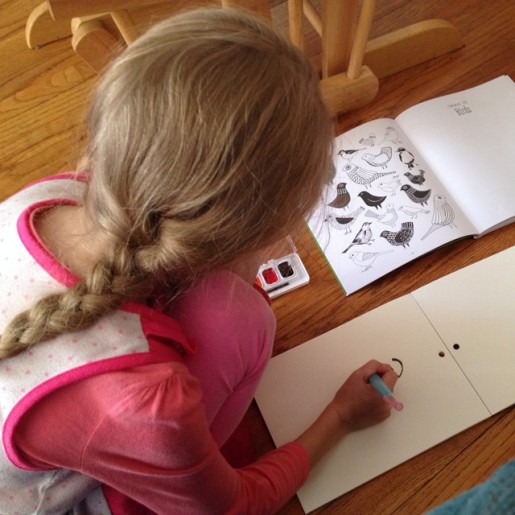 20 Ways to Draw a Tree: the bird page 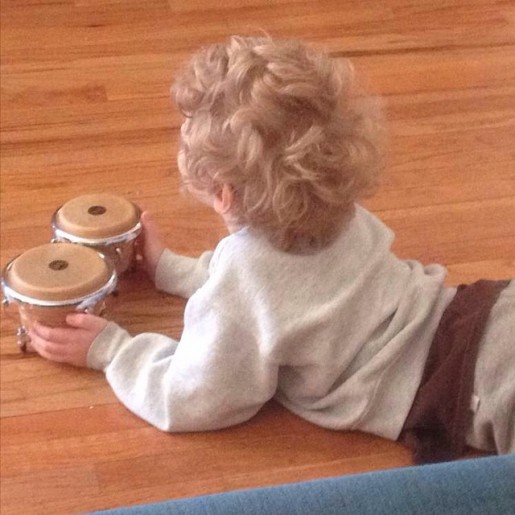 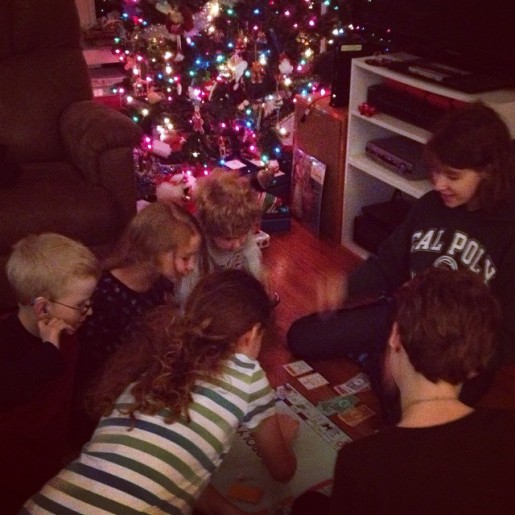 Hope your holidays are happy and restful, friends. And filled with good books!

One of my best birthday presents

Our pal Chris Gugliotti posted this happy drawing of me on Facebook for my birthday. Makes me smile every time I see it! 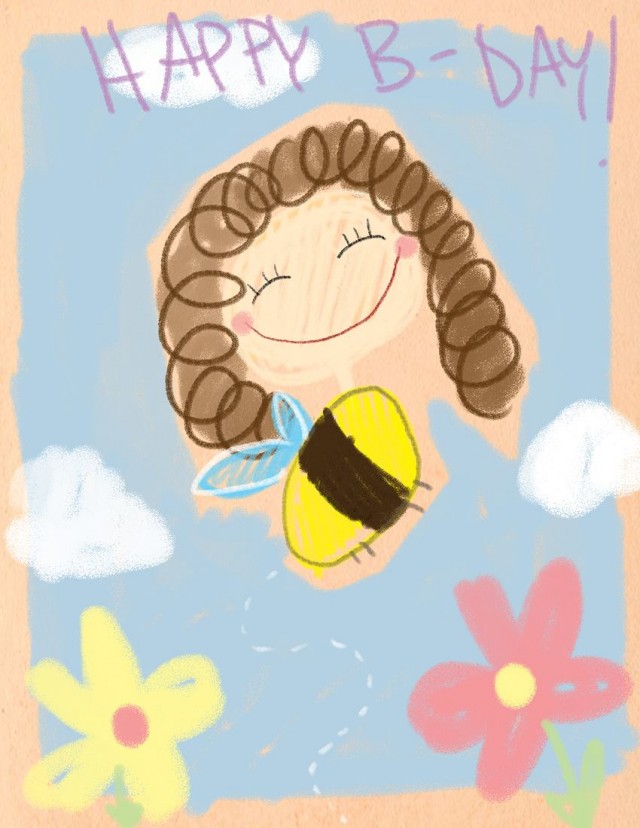 I know, I know, I go dark for almost two weeks and then suddenly, what, four posts in one day. But if there’s anything I’ve learned in (ye gods) nine years and eleven months of blogging, it’s: if you have something to write, write it, and if you don’t, don’t sweat it. And following a related-links rabbit trail on the Huck post this morning led me through many moments I’m glad I chronicled. So here’s an entry for the memory vault.

Of course the main reason for my silence has been my pile of Cybils reading, as we’re rapidly approaching The Big Discussion right after Christmas. I gave up maintaining my sidebar and Goodreads reading logs weeks ago, but after the madness is over I’ll use my Cybils log to catch up. If you are stuck for book choices I can make suggestions, boy howdy.

(I love this committee. It’s so good for mah brain to consume a megadose of YA fiction every couple of years. And my fellow panelists are so darn smart. It’s the book club of my dreams—fierce but fleeting.)

The other occupier of my time has been a glorious stream of company. 🙂 ’Tis the season for visits from college friends. We had Kristen and her family for Thanksgiving (Krissy, did you get any good pix? Mine, not so much) and then a long-awaited, unremittingly delightful week with my friends Ron and Larry from Portland. I got to show them Balboa Park (the best part of San Diego) not once but twice: two long lovely afternoons there roaming through gardens and museums. One day with kids and one day without. Beanie and Rilla came with us to the SD Museum of Art, where the “Gauguin to Warhol” exhibit wowed us. I wasn’t surprised to be choked up by seeing a Frida Kahlo up close (Self Portrait with Monkey), but I didn’t expect the Jackson Pollock to move me the way it did. The scope of the thing, a whole massive wall of paint crammed with small stories.

Soon we’ll have my parents here, and Jane finished finals yesterday (with a paper on Prufrock, color me proud) and will be headed home in a few days. Fortunately she wasn’t planning on taking the train home today! Amtrak had to cancel the coastal train due to this crazy storm. Water, finally! More than this parched land can handle. Much worse in LA than here. We’re cozying up at home for now.

The other notable thing about our December is, of course, that it’s our biggest birthday month. So before I pour in a bunch of photos from Instagram and elsewhere these past few weeks, I’ll just leave you with this: Wonderboy is eleven now. Eleven! 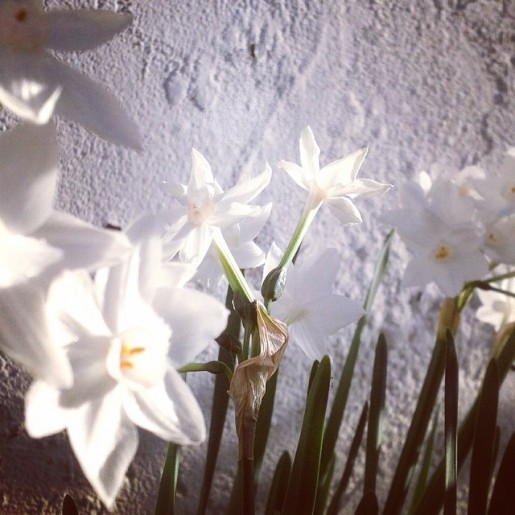 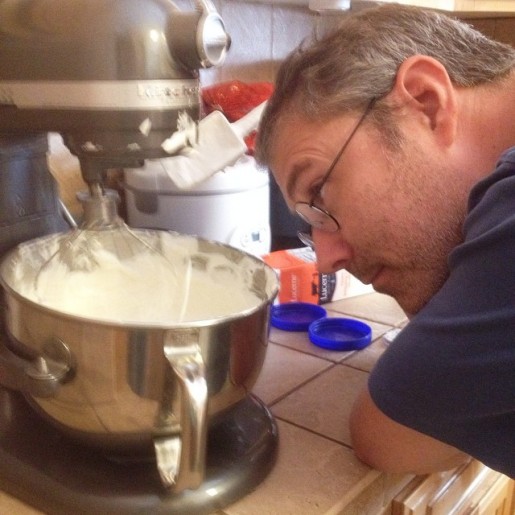 genius at work: the making of the annual grasshopper pie 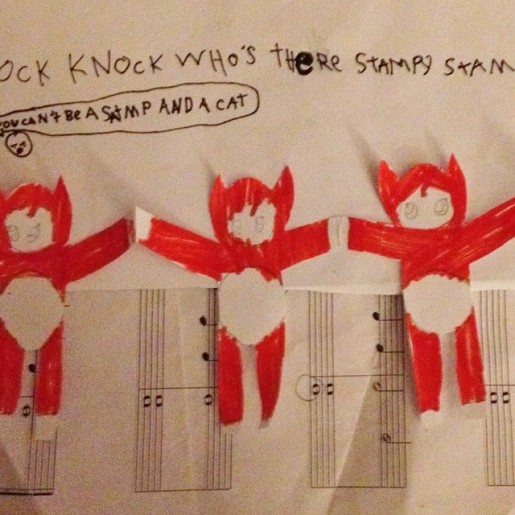 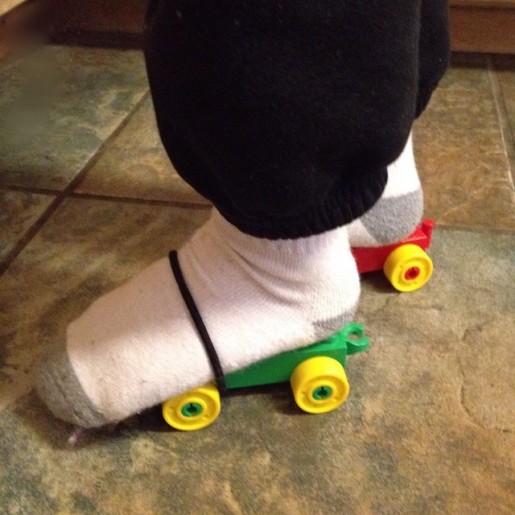 shockingly, this did not end in a trip to the emergency room 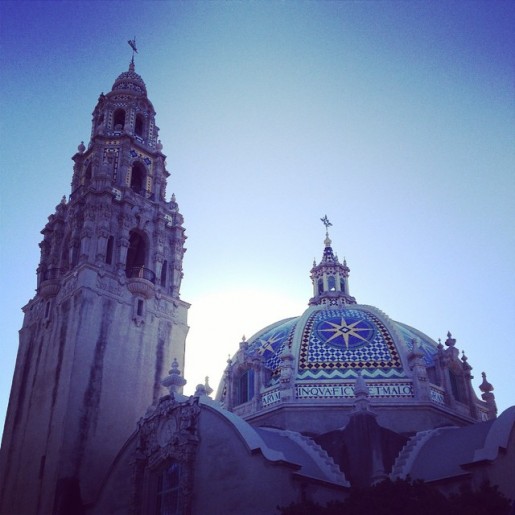 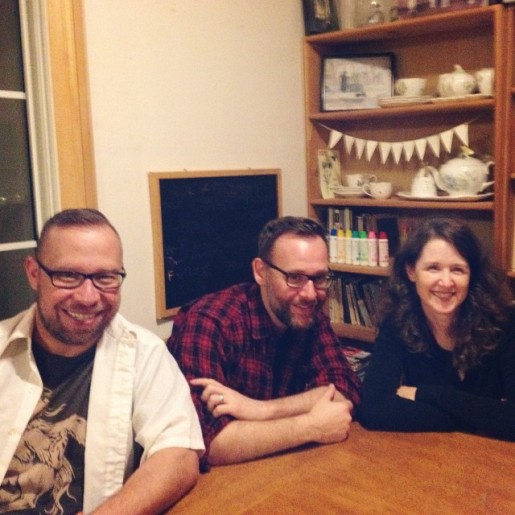 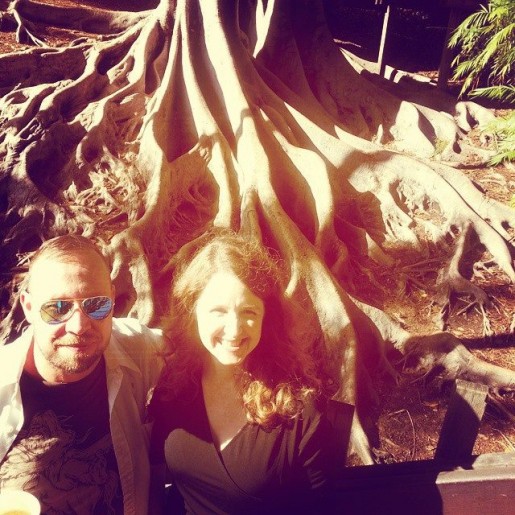 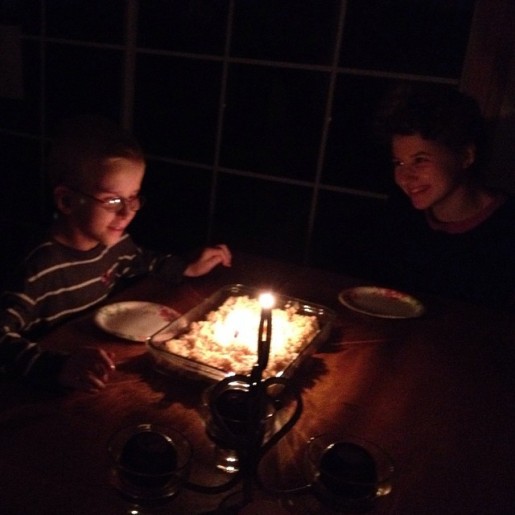