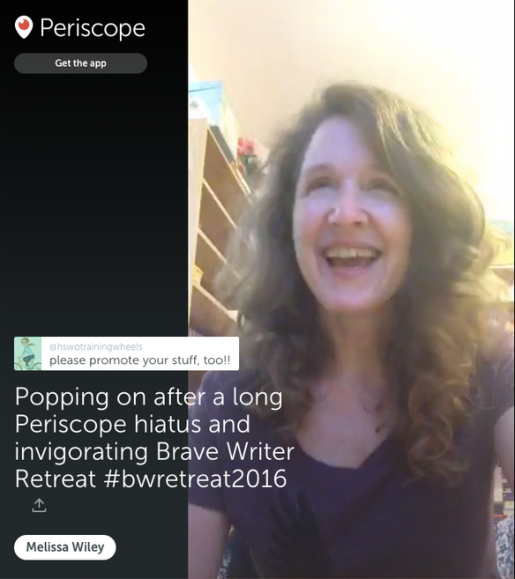 Okay, first things first! Here’s the link to my Brave Writer Retreat Resources page that I mentioned in the Periscope I just finished. I’m still adding links and books to this page—things that came up in the course of our discussions at the BW Retreat. For some reason the comments are broken on it, but you can leave questions here on the blog, or ping me on Facebook, Instagram, Twitter, etc.

I just finished a scope on the glorious time I had at the retreat, which you can view here: Popping on Periscope after a long hiatus and invigorating Brave Writer Retreat.  I’m listening to the replay right now and it seems to be a bit spotty—some gaps in the recording here and there? Not sure what’s up with that. But you’ll get the gist. 🙂 And as usual we veered down a lot of rabbit trails. Scrivener, Hobonichi, Gotham Adventures, loads of things.

After SDCC, I’ll get myself back into a regular Periscope habit (and I think it’ll be fun to do some scoping from Comic-Con itself!). So many good topics and questions came up during the retreat, things like building habits and read-aloud strategies and comics suggestions and “towooshuns”—tons of juicy stuff I’d like to address both here and on Periscope. So stay tuned for that. I’ve returned from Cincinnati rejuvenated and eager to talk more about Tidal Homeschooling and comics and kidlit and habits and, oh, everything!

Things I mentioned in the ‘scope:

Wild Simplicity Daybook (here’s a post I wrote about it)