August 2008. The baby has several inches on me now but the bookstacks are just about the same.

I’ve learned, by now, that in the days before a writing deadline, many of my good habits and creative practices slide away. Often, I go into overkill mode and obsessively power through chores that could absolutely wait until after I finish the writing assignment. Last week, with yesterday’s Dart deadline approaching, the obsessions were updating my long-neglected (we’re talking months) Goodreads & sidebar book logs, and a handstitching project meant to help with the writing, not haunt my every thought.

The Goodreads update took so long that I fizzled out before getting to the sidebar; and then I had the bright idea of outsourcing the update to Beanie. (I mentioned to a friend that I was hiring Bean to do some virtual assistant work for me. The friend gave me an amused look and asked, “Don’t you mean actual assistant? Not virtual? You’re in the same house.” I burst out laughing. Yes. Of course. Not virtual when you’re in the same house. Maybe I’m tireder than I realize.)

Well, thanks to Beanie, all my booklists—including the sidebar here—are up to date. Links go (mostly) to Bookshop.org, where I have a little storefront that supports independent bookstores and sends a small referral fee my way. Both Bean and Rilla jumped in to add favorite titles to a few of the lists I’m building there—Rilla started her own list!—and we plan to keep adding to our collections. Most of our lists are still in their infancy. It’s a big project, combing our shelves for our best-loved books.

But where was I going with this post? I started it twelve hours ago and have lost the thread. Oh yes, breadcrumbs. When I curled up with my cocoa this morning, I felt like a stranger to my own self. What did I use to do in these quiet dawn hours? It had only been a week, less than a week, but my poetry mornings felt extremely far away.

I reached for my notebook and was relieved to find I still inhabited the pages. Read—write—stretch—stitch—breathe. As simple as that. Maybe sketch a little, water the garden before the heat flattens us all. My “seven sevens” (pick any activity from that list and do it for at least seven minutes, and fall into whichever one opens up for me) caught me, stilled the aimless spinning, reminded me how creative practice works.

It seemed hardly ten heartbeats later that Huck came to get me for our walk. He finished his garden-watering job on Monday but we decided we both loved the early-morning walk so much that we wanted to keep it up. Today he wanted to visit the giant sequoia seven blocks east. Another seven, sending me into the day. 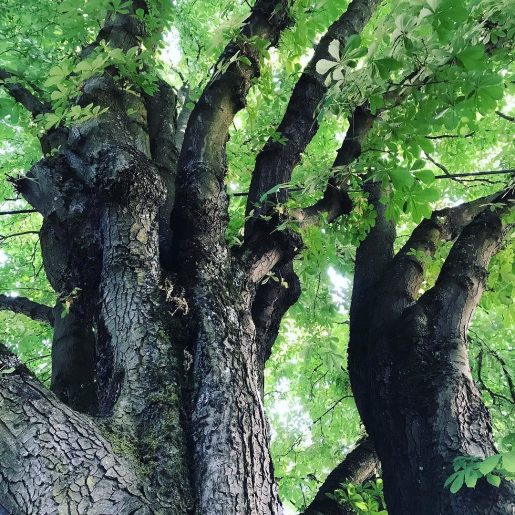