Archive for the ‘SDCC’ Category

I owe my daughter Jane a nod of thanks for this one. Sunday-morning-at-10:00 panels don’t usually make my list, but Jane attended Comic-Con for the first time on Sunday and she was especially keen to hear Rick Riordan speak about his Percy Jackson books. So in we went, bright and early, and snagged good seats about four rows from the front.

The interviewer was acclaimed Irish author Michael Scott, an authority on Celtic folklore and writer of the popular Nicholas Flamel series. Both Scott and Riordan had a wonderful rapport with the audience, showing genuine affection for their enthusiastic young fans. I so enjoyed the warmth, humor, and wisdom radiating from these two amiable authors. Michael Scott asked wonderful questions and could undoubtedly have gone on asking them for a good long while, but the queue of readers eager to ask Riordan their own questions was so long that Scott graciously turned the floor over to the fans about halfway into the hour.

I’m pressed for time today (this week, this month) so what I’m going to do is simply type up my notes. If any point is particularly interesting to you, leave a comment and I’ll try to expand on it there. END_OF_DOCUMENT_TOKEN_TO_BE_REPLACED

What I Did at SDCC

“So what do you do at Comic-Con, anyway?” a friend asked me. My con experience is generally quite different from most of my friends’ experiences there, the daytime parts at least. Most of my con pals are writers, artists, and editors who are there to work. They put in time at publishers’ booths, they sign books and do sketches, they speak on panels and meet fans and go to special events. For most pros, it’s a fun week, but a hard one too, often quite exhausting. People are usually pretty wiped out by Sunday afternoon. Even I am exhausted, and I didn’t have to work. As you know, I took a break from fiction writing with the last two babies, so I haven’t had any new books to promote in the past couple of years. (Though I suppose this is as good a time as any to tell you that I did get back to work in January, and I will have three new books coming out in 2012 and 2013. But that’s a topic for another post…)

At dinner with Babymouse author and utterly lovable person, Jenni Holm, and her delightful husband, video game developer Jonathan Hamel. My crazy gremlin smile is because that is how happy they make me.

Anyway, for me, as a pro who has been on hiatus, SDCC is kind of an ideal convention experience: I get all the fun of spending time with writer and artist friends, many of whom I only see once a year, and I get to explore the vendor hall and scout out interesting new books to read—which you know is pretty much my favorite pastime—but I am also free to attend panels all day long, if I wish. And I love the panels at Comic-Con. I love listening to other creative professionals talk about their work. The folks who speak on SDCC panels are some of the smartest, most talented, most interesting people I’ve ever had the pleasure to listen to. Comic book writers and artists, children’s book writers, science fiction and fantasy authors, cartoonists, editors…a feast for the curious mind.

So: I went to lots of panels, and when I wasn’t tweeting about them, I took copious notes in my notebook—notes I will shortly attempt to write up here, for my own records if nothing else. Here are the panels I attended; I’d love to know which ones you’d be most interested in hearing more about:

• “Once Upon a Time”—panel on high fantasy with authors Brandon Sanderson, Brent Weeks, Lynn Flewelling, Megan Whalen Turner, Christopher Paolini, and Patrick Rothfuss. SUCH A GREAT DISCUSSION! Topics: everyman vs. superhero; role of prophecy/destiny in fiction.

• Spotlight on the legendary comic-book writer and Batman editor Dennis O’Neil, moderated by my favorite man in comics, a handsome fellow by the name of Scott Peterson

Besides the panels, there were lunches and dinners and discussions that lasted late into the night. On Saturday evening a large group of children’s lit folks—authors, artists, and editors—met for drinks at the Hyatt and then a bunch of us drifted over to Buster’s Beach House for fish tacos and lively chat.

The lovely Raina Telgemeier, author/illustrator of Smile (the graphic novel Rose has read at least six time in the past four weeks), and her husband, cartoonist Dave Roman.

I’ll share my enticing book discoveries in another post; exploring the publisher booths occupied a considerable number of my hours at the con. And, of course, there was plenty of time simply to marvel at (and sometimes be overwhelmed by) the crowds—tens of thousands of creative, colorful comic-book fans, some of the most dedicated and passionate readers in the world.

The amazing, Eisner-nominated artist Fiona Staples drew this sketch for me. I can’t stop looking at it and giggling from sheer glee. Thanks, Fiona. 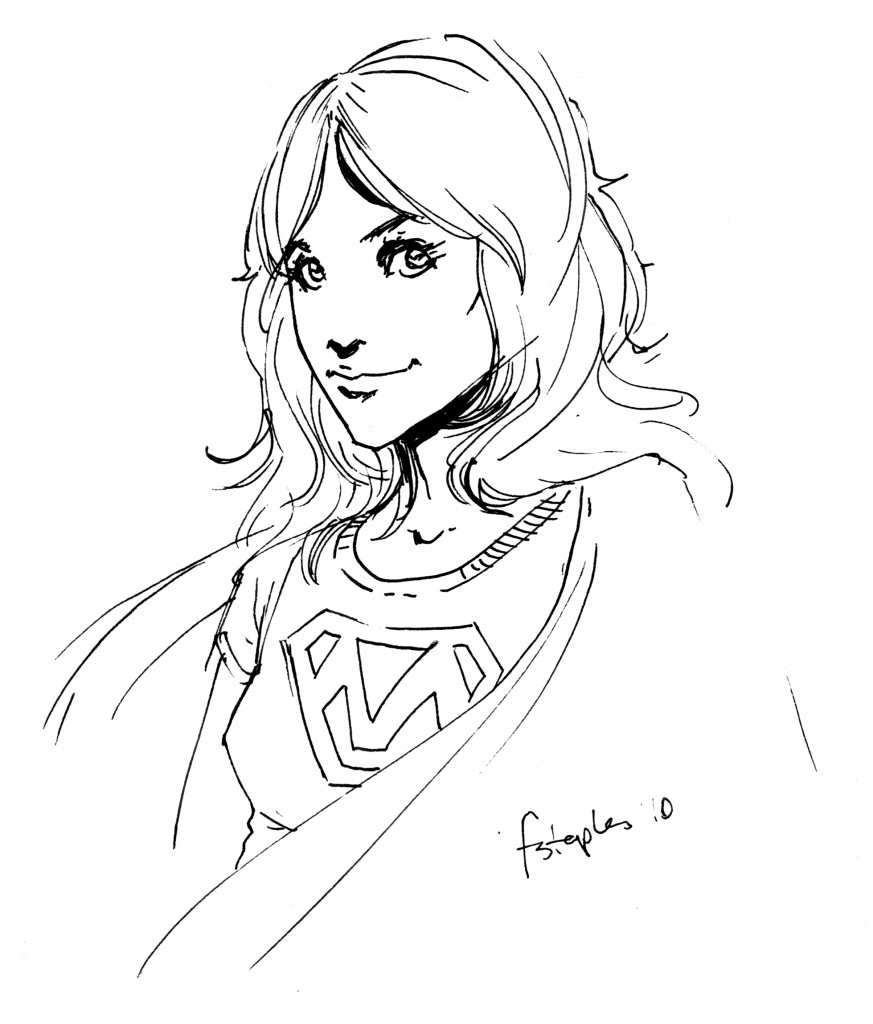 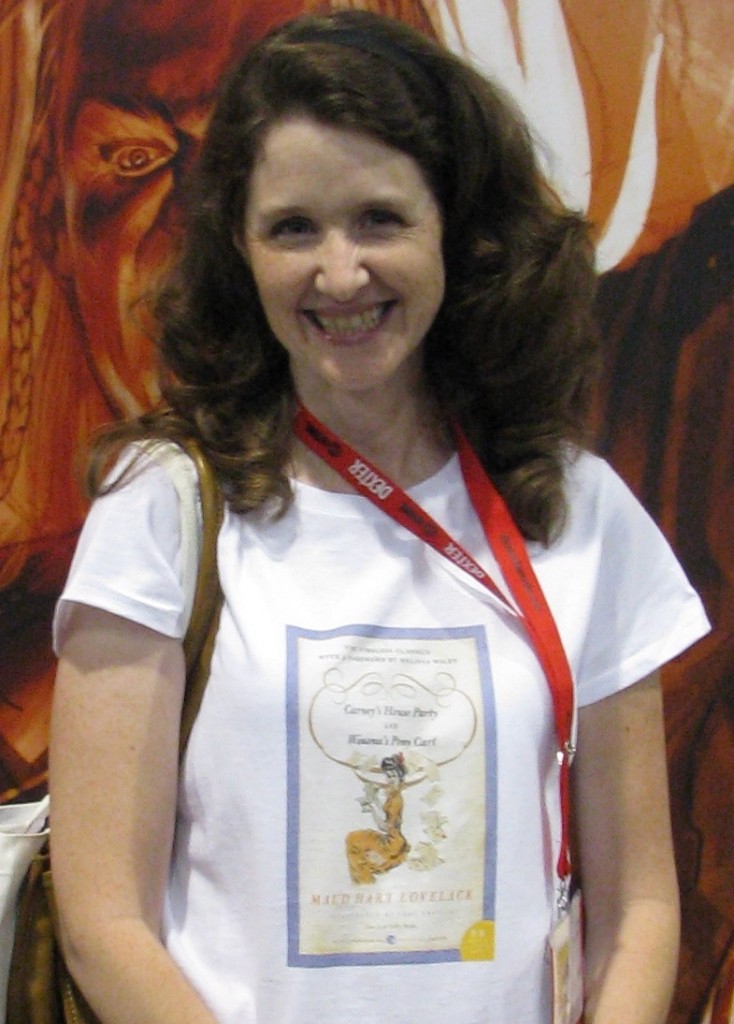 Coolest thing I saw at the con. These pictures don’t come close to doing it justice. I chatted briefly with the owner—she did all the work herself. Wish I’d gotten her name. Amazing craftsmanship. 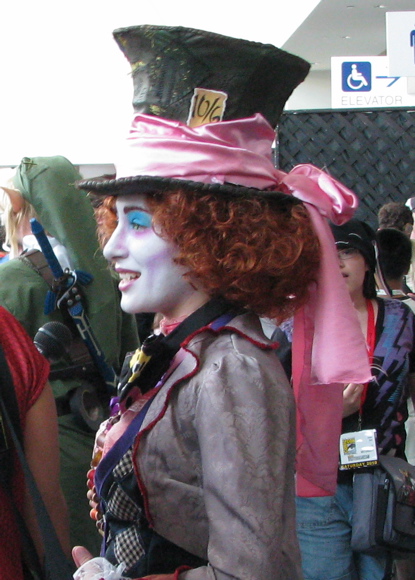 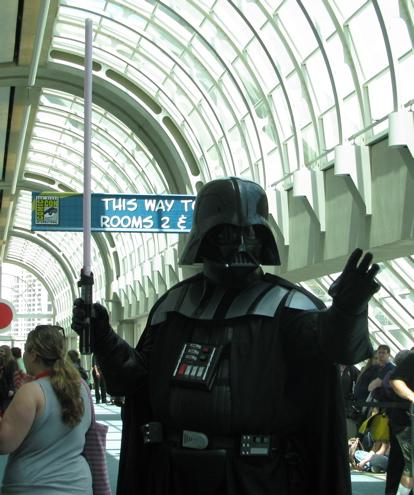 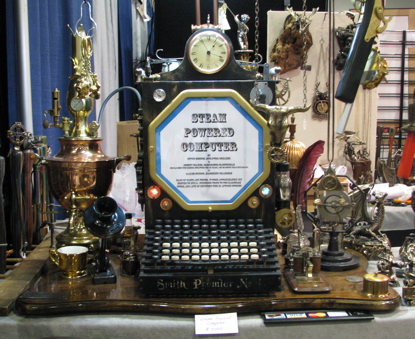 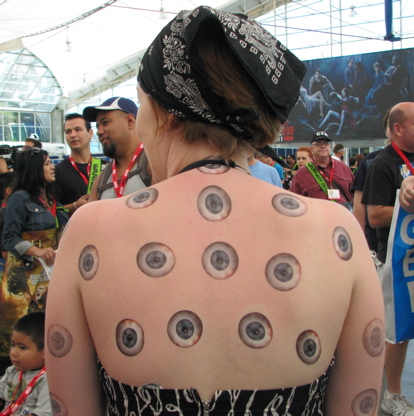 Is pretty much my state of mind this week. Don’t know if I’ve ever mentioned it, but I—LOVE—COMIC-CON. Even if it totally betrays my hopeless fangirl geekitude to the world. (Because, you know, that was such a well-kept secret.)

My poor husband. This is a long, weary, hard-working week for him. He swears it’s just a coincidence that the song he had playing on iTunes in the kitchen this morning was “It’s the End of the World as We Know It.”

Me: Time you had some time alone, eh? Already?

Posting will be light this week—Comic-Con updates will happen mostly on Twitter. Recaps and photos will be here next week. Cheers!