“The exquisite touch, which renders ordinary commonplace things and characters interesting…is denied to me.”

These posts are going to get very short all of a sudden because Rose and Beanie have departed for a week with my parents. I’ll miss our daily Poetry 180 readings. To make up for it, I made sure to catch today’s Writer’s Almanac entry. “Yard Sale” by George Bilgere. And it seems it’s Christopher Marlowe’s birthday! He was only 29 when he died, can you believe it?

After lunch: Howards End Is on the Landing. Standout bits: This quote from Sir Walter Scott:

Also read again, and for the third time at least, Miss Austen’s very finely written novel of Pride and Prejudice. That young lady had a talent for describing the involvements and feelings and characters of ordinary life, which is to me the most wonderful I ever met with. The Big Bow-wow strain I can do myself like any now going; but the exquisite touch, which renders ordinary commonplace things and characters interesting, from the truth of the description and the sentiment, is denied to me.

Oh how I love to hear writers talking about what other writers can pull off that they themselves can’t.

And just a note to myself to look up Penelope Fitzgerald’s The Blue Flower. Hill’s description certainly sells it. Also loved this line Hill quotes from a letter Fitzgerald wrote her, on the delights of being a grandmother:

It is such a joy to have someone who wishes to sit with you on a sofa and listen to a watch tick.

Nov. 1960. Katharine White to Elizabeth Lawrence, regarding Katharine’s latest “Onward and Upward in the Garden Column” in the New Yorker:

Then another thing I did wrong, apparently, was to give the impression by my wording on Gertrude Jekyll that England had never had naturalized plantings until Robinson and Jekyll came along. Of course it had, and I knew it. I’m not learned enough to know where the craze for bedding out and for copying formal European gardens started but I remembered a passage in Mansfield Park where all the Bertrams and the Crawfords and poor Fanny Price went to spend the day at Mr. Rushworth’s estate to consider how to remake his landscaping and gardens, and Fanny mourned because Henry Crawford recommended cutting down an avenue of old trees. This made me wonder whether it was not between 1800 and 1820 that this all started. Jane Austen commenced this novel in 1811 and it was published in 1814. Do you, with your real learning, know about this? I would love to use the reference to Mansfield Park (and some others in the Austen novels) in a later piece if by any chance my hunch is right that Jane was satirizing a new fad in gardens…

I’ll lend you an article I have on Repton and Jane Austen, and I think it will answer all your questions….

The “naturalistic movement” came at the end of the the seventeenth century with the Earl of Shaftesbury, Addison and Pope. but it wasn’t very natural, I gather: ruins, romance and rustic seats.

[An aside. Later in the letter, Elizabeth adds a word of comfort for her meticulous friend’s consternation over slight inaccuracies in the New Yorker piece:

I gruel over things as you do, but I learn more by making mistakes than any other way. Even with the greatest care I find errors creep in, and when I learn better I write and correct what I’ve said before. But I try not to let it bother me. Everyone makes mistakes, but the really despicable people are those who protect themselves by never making a definite statement.

Emphasis mine. Oh how I love her!]

Two Gardeners editor Emily Herring Wilson helpfully includes a footnote to let us know that the article on Repton and Jane Austen was a piece by Elsa Rehmann called “Jane Austen and the English Landscape School,” published in Landscape Architecture in 1935. Katharine sends Elizabeth her thanks and expresses a hope to borrow the article until she has a chance to write her next column.

I admit I was crestfallen to find that Jane Austen had been so thoroughly explored, but I also think the author of that piece and even Jane’s famous editor, Chapman, didn’t quite see that the novelist was satirizing a current fad, in somewhat the same way, except more mildly, that she poked fun at the gothic novel. That least that is my theory, probably false…

This sent me looking for a passage I thought was in Sense and Sensibility, in which the odious Fanny Dashwood points out a grove of old trees and casually mentions her plans to have them pulled down and replaced with a Grecian temple. I couldn’t find it on a quick flip-through, though. Perhaps I am only remembering the film? Now that I think about it, I wonder if Emma Thompson borrowed that bit from the Mansfield Park scene Mrs. White describes above.

Related:
Two Gardeners: A Rabbit Trail
“I have had to give up writing to my close friends”
“In the last decade our fiction writers use only ‘I’…”
Before the Internet

J is for Jane…

…Austen, that is. I meant to link to this last week: one* of my favorite finds at Wondercon. 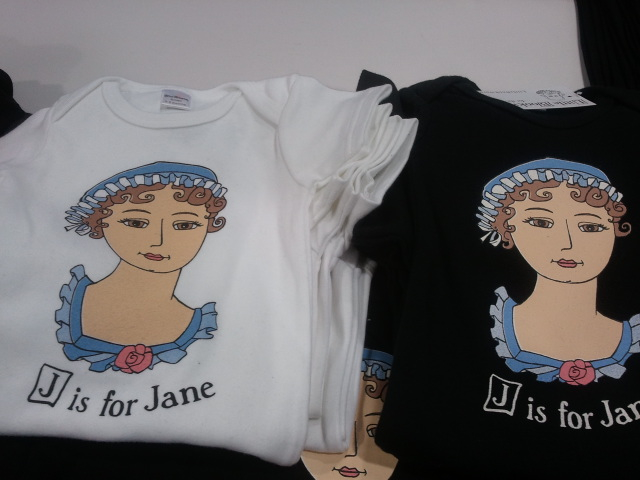 *The link goes to a GeekMom post about my favorite Wondercon finds, plural, but it was the LittleBookwormz “J is for Jane” shirt (and W is for William, E is for Edgar, etc) that I thought my Bonny Glen friends might be particularly interested in. 🙂

(And yep, you bet I brought one home for my own Jane!)