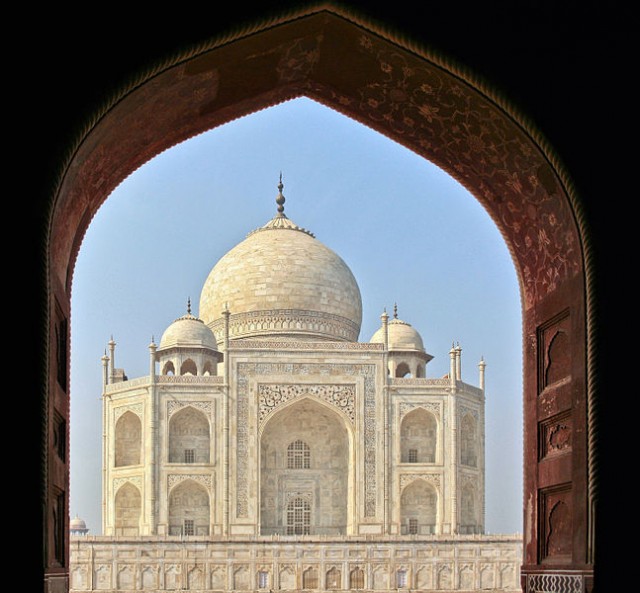 I’ve written about this book before: 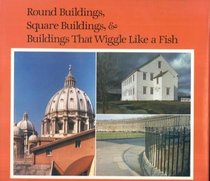 by Philip M. Isaacson. Twelve years ago, this children’s book was my introduction to the study of architecture. I’ve never looked at buildings the same way since.

“Isaacson takes the reader on a leisurely, respectful tour of buildings around the world: churches, houses, museums, lighthouses, all kinds of structures, from the humble to the magnificent. In simple, straightforward prose he discusses various architectural concepts such as the impact of building materials, the interplay of light and color, and the significance of roof shape. His stunning photographs turn even the roughest earthen hut into a work of art. His lyrical text helps us see in the pictures what we might otherwise have missed:

‘These buildings are part of the Shaker Village at Sabbathday, Maine. On an afternoon in late winter they are warm and creamy, but in December, shadows thrown at them make them look haunted. A building only a few yards away fades into the land on a hazy morning.'”

Round Buildings, Square Buildings was edited by my first boss in publishing, the great Stephanie Spinner. It was near completion by the time I came on board; I don’t think I did much more than look over galleys and jacket copy, and probably put through the request for Mr. Isaacson’s author copies. It’s one of those books I sat at my desk reading, unable to believe my good fortune: This is my job now; I’m getting paid to read. 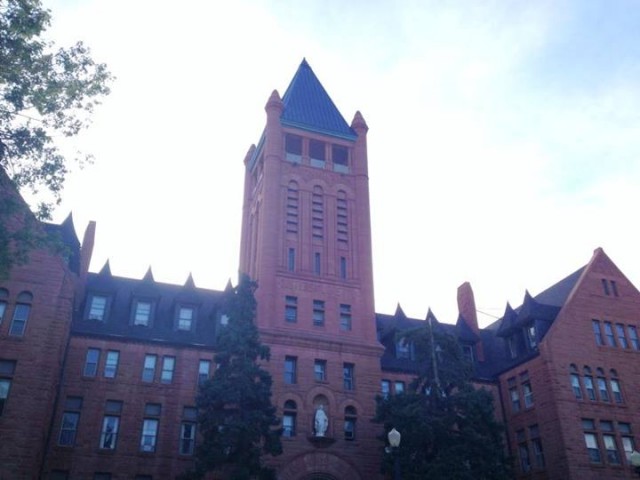 Before Round Buildings I hadn’t done much real seeing of architecture. There were buildings I loved: the sandstone administration building (formerly a convent) of my first college, Loretto Heights, with its red tower soft-edged against a blue sky, and inside, a gorgeous mosaic floor—tiny tiles set into place by wagon-training nuns, so the story went. But even there, I was drawn more to story than to form. Most of the buildings that captured my imagination, pre-Isaacson, lived in books: Green Gables, the House o’ Dreams, Jane’s Lantern Hill house with its “lashings of magic.” The Muskoka cabin. (No one does houses better than Montgomery.) Plumfield. Juniper’s cottage. Miss Suzy’s tree-house with its acorn cups. Vicky Austin’s grandfather’s house-in-a-converted-stable with the stalls full of books. A great many English houses in a great many English novels.

But most of the time, my eye was drawn more to nature than to man’s edifices. I had next to no vocabulary for understanding architecture. Isaacson changed that in a paragraph with his description of the creamy walls of the Taj Mahal changing colors as the sun moved across them—the very passage I read with Beanie and Rose this morning. He writes about harmony and you find yourself looking for it everywhere you go. He made me see my world differently—just as John Stilgoe’s Outside Lies Magic changed how I looked at just about everything else: power lines, rain gutters, a sculpture garden, the line at the DMV. The way Betty Edwards’s Drawing on the Right Side of the Brain changed the way I see faces. 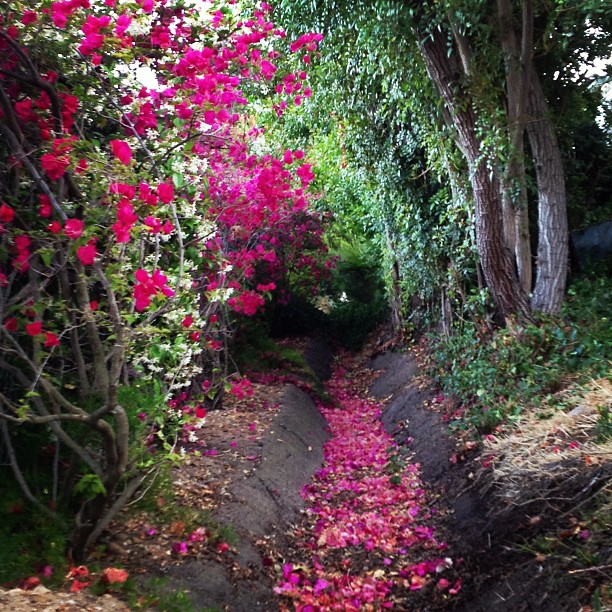 Clicking through these old posts, I see I’ve made a connection between these three books before. They’re transformative, all three.

Funny also to see in the old Stilgoe post I linked above, “Way Leads on to Way,” that I’d been reading Fifty Famous Stories Retold* to Beanie that year—in March, 2008, when she was seven years old. And now here’s Rilla seven, and I’m reading it to her. (Today’s tale: Androclus and the Lion. It drew cheers, and a narration with gusto. Because LION.) I have to laugh: way doesn’t just lead on to way; sometimes it leads right back full circle. I didn’t choose Round Buildings for the older girls and Fifty Famous Stories for the seven-year-old at the same time—again—on purpose; I guess it’s just that I’ve been doing this long enough now that I know what works for us, and these things have worked time and again. It did strike me this morning, reading the Isaacson, that the Stilgoe might be a satisfying read for Jane and Rose right about now.

**Also wonderful: Isaacson’s sequel, A Short Walk Around the Pyramids and Through the World of Art

About That Bee Book

As you know, I’ve had bees on my mind for weeks. I keep talking about Fruitless Fall: The Collapse of the Honey Bee and the Coming Agricultural Crisis, the book about bee colony collapse written by my former grad-school classmate, Rowan Jacobsen.

How much have you read about bee colony collapse?

I knew the honeybee’s numbers were declining. I remember hearing the wacky cell phone theory several years back, and that was laughed out of the news, and since then I’ve just heard ominous mutterings now and then about the bees disappearing and nobody knows why.

But I didn’t know the half of it.

I didn’t know, for example, that nowadays U.S. beekeepers earn most of their income—far more than they earn selling honey—trucking their hives around the country to pollinate crops. Somehow this gobsmacks me. We are dependent on migrant worker bees for the produce we grow in this country.

I definitely didn’t know that in the winter of 2006/2007, huge numbers of these hives began to die, and no one is sure exactly why. There are theories, which is a lot of what Rowan’s book is about: an in-depth and thoughtful exploration of what could possibly be causing the collapse of our bee colonies.

As I said above, when I heard about “the disappearance of the honeybee” I thought it meant declining numbers. Pesticides, I assumed (and indeed that seems to be a major factor). What I didn’t get was that bees literally disappeared. The hives died because the forager bees flew out and didn’t fly back home. There are diseases and pests that kill bees, and you find dead bees in and around the hive. (That’s happening too, in horrifying numbers.) But in other cases, the bees just up and disappeared. One possible explanation, Rowan learned, is a kind of disorientation and memory loss known to be a symptom of neurological damage caused by certain pesticides. It’s possible the bees are suffering from something like bee Alzheimer’s due to exposure to toxins meant to kill other insects. They fly off to work and can’t find their way back home. And in other hives, there are bees carrying every bee disease, fungus, and pest known to afflict the honeybee world—all at once. It’s as if their immune systems have been decimated (possible cause: the catastrophic wave of varroa mite infestation that arrived in this country a few years back and is a terrible scourge in many parts of the world right now), leaving them susceptible to other illnesses.

And it isn’t just the honeybees: we know a lot about the decline in their numbers because they are domesticated bees, owned by devoted beekeepers who know exactly how many hives they have lost to varroa and bee colony collapse. No one has good numbers on all the other pollinating insects out there, except it seems clear honeybees aren’t the only pollinators in decline. Did you know vanilla beans are hand-pollinated by humans? The insect pollinator has been wiped out.

Obviously Fruitless Fall made a big impact on me. Shook me up; Jane too. The funny thing is, at the very same time that it was scaring the pants off me (a world short on pollinators is a scary, scary concept), it was filling me with wonder and delight. I know that sounds impossible. It’s the way Rowan looks so closely, with humor, warmth, and affection, at this ordinary (extraordinary!) creature, the honeybee. It reminded me of the John Stilgoe book I kept raving about last year, Outside Lies Magic. Remember that one? What Stilgoe did for me with power lines and telephone poles, Rowan Jacobsen did for me with bees and honey and even figs. The early chapters describing life in a beehive and the life cycle of the bee were so engaging that I read them aloud to 8-year-old Beanie, who was captivated. Jane (almost 14) has read the book at least three times now. She begged me to order Rowan’s book on chocolate—along with our very own copy of Fruitless Fall. Which is a good thing, because I find myself wanting to thrust the book at everyone I talk to. It’s that kind of book.