“…wake to the wonder of this grass” 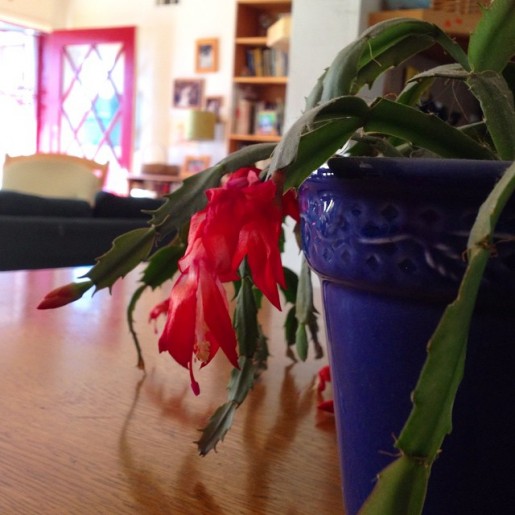 Ours is in bloom this very day, as it happens

“Our Christmas cactus has predictably bloomed each December for three decades and some years when it has been colder for longer, as is the case this year, it often blooms more than once a year. Our Christmas cactus is alive and growing 365 days of the year, most of which it is rarely seen by me but only looked at.”

That’s Owen Swain in his post “Blooming Cactus / blooming an illustrated life / and, what I learned in Sketchbook Skool.”

In his drawing of the cactus, he includes a quote which sent me immediately dashing for my commonplace book (which is to say, this blog).

“While drawing grasses I learn nothing ‘about’ grass, but wake to the wonder of this grass and its growing, to the wonder that there is grass at all.”

That. Yes. Exactly. Or at least, I suppose I would say I learn something about grass when I’m drawing it, I learn something about everything I look at closely. But that kind of learning is implied in the quote. I get what he means by ‘about.’ And yes, the waking to the wonder of a thing by observing it quietly, moving your pen along its paths, or by writing a poem about it (“This grasshopper, I mean—/ the one who has flung herself out of the grass,/ the one who is eating sugar out of my hand, who is moving her jaws back and forth instead of up and down—/ who is gazing around with her enormous and complicated eyes…”)*; even, I daresay, by blogging about it—the combined act of observing, pondering, and then expressing, in word or line—these endeavors shift your relationship with the humble object; they awaken you to the wonder the thing actually is.

The very first revelation that struck me about drawing, way back in college during a too-brief foray into sketching, was the passage in the Betty Edwards book Drawing on the Right Side of the Brain in which one of Betty’s students mentioned that after she began trying to draw faces, “every face I looked at seemed beautiful to me.” I have written before about the enormous impact that statement had on me, not just in relation to drawing but to an overall view of life.

The drawing lessons taught her to really look at people, and when she did, she saw beauty everywhere.

I know I’m going all over the place here, but in my mind these things are all connected: this way of really looking, really seeing, noticing what is interesting and important and even beautiful about things many people whisk by without noticing. And what I can do for my children is refuse to fill up their lives with things they must patiently endure until a better moment comes. I can savor the moments as they happen, and give them the time and space to find what’s interesting and beautiful in every face the world shows them.

As I was writing that last sentence, Beanie appeared in front of me with a big smile and a present: a bracelet made of safety pins linked together, each pin shining with green and blue beads. “It’s for you, Mommy,” she breathed, so proud and excited. “Jane showed me how.” How patiently (the good kind of patience) she must have worked to slide all those beads in place.

I never noticed before what a work of art a safety pin is!

I’ve written so many times on this blog about how my approach to education is to keep the focus on the process, not the product. The lesson is renewed for me every time I take pencil in hand and try to capture the lines of a thing on my page. In the end, it doesn’t matter at all how my drawing ‘turns out.’ The magic is in the doing.

*From “The Summer Day” by Mary Oliver

“The difficulty of getting rid of even one half of one’s possessions is considerable, even at removal prices. And after the standard items are disposed of—china, rugs, furniture, books—the surface is merely scratched: you open a closet door and there in the half-dark sit a catcher’s mitt and an old biology notebook.”

“…you should think of will-power as something that never exists in the present tense, only in the future and the past. At one moment you have decided to do or refrain from an action and the next moment you have already done or refrained; it is the only way to deal with will-power….I offer this advice without fee; it is included in the price of this book.”

—Mrs. Hutchins, the narrator of Muriel Spark’s A Far Cry from Kensington

“…the sun and the sifting shadows…”

From Tiina Nunnally‘s introduction to her translation of Kristin Lavransdatter:

Sigrid Undset’s great gift as a writer might best be described in her own appraisal of Charlotte Brontë, whom she much admired: “[Her] sense of self is grounded in her awareness that her art is bitterly true, that her talent is merely the courage to look honestly into her own heart. [She] wished to depict life and reality the way they are—life and reality as they existed in her own heart, in the limitless possibilities of her heart, in her dreams and yearnings, in the mirages of hunger and thirst—and in all the tiny gray-pebble days over which life flows.”

Undset had been an avid botanist. As an eighteen-year-old she described in a letter her love of nature as “that hypnotic immersion in the corolla of a rose when you have stared at it for so long that all outlines are erased and you become dizzy with crimson.” She said that she longed to “disappear into nature so that you cease to feel or think, but with all your senses you greedily draw in the light and colors, the rustling of leaves and the trickling of underground streams, the sun and the shifting shadows—that is happiness, nirvana.”

Book Quotes We Use a Lot

“I have no more run in me.” —That’s Good, That’s Bad by Joan M. Lexau, illustrated by Aliki

“Koala Lou, I DO love you!”—Koala Lou by Mem Fox

“Bub.”—from the book of the same title by Natalie Babbit

“Never tease a weasel, not even once or twice…”

“‘Forever and ever, my nibble, my nosh,
Till death do us part,’ said Heironymus Bosch.”

—and readers of Scott’s blog will recognize his sometimes-tagline taken from the same much-loved book:

“Let the crickets rejoice and the mantises pray.”

Here’s some for you to guess:

“Though she be but little, she is fierce.” (A play, not a book. With our Rilla in the house, we use this one all the time.)

“Where else does an old turtle crossing the road make all the difference in the world?”

This one is one of Alice’s new favorites, with good reason: “She went boneless.”

“We’re meant to be invisible.” (That one’s really hard. I’ll be shocked if anyone gets it. It’d be easier to guess if you could hear it spoken out loud.)

The day before my daughters’ tenth birthdays, I always sing:

I wrote Scott at work to ask him, because I was blanking, what book our oft-used line “Of course, he was not mistaken” came from. He reminded me it’s not from a book at all. It’s from Harvey. Of course.

I’ll add more as I think of them!