You know how we feel about the work of Tom Lichtenheld here in the Bonny Glen. Shark vs. Train. Goodnight, Goodnight Construction Site. You can imagine, then, our delight upon receiving a review copy of his latest picture book from his publishers. 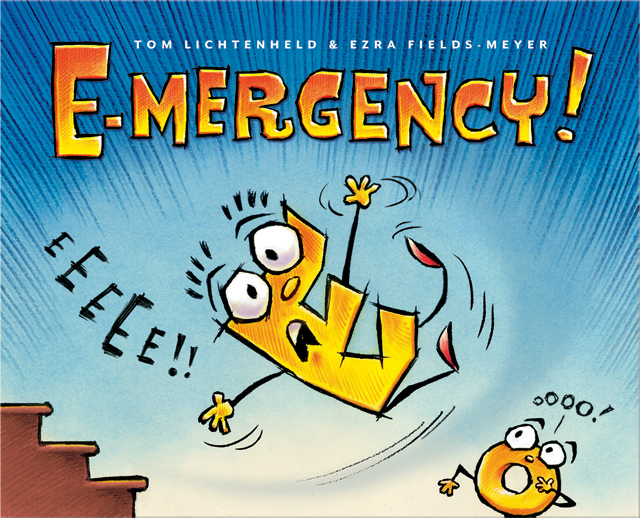 E-mergency!—created in collaboration with fourteen-year-old Ezra Fields-Meyer—is another winner. See, the letters of the alphabet all live together in a big house. They come barrelling down the stairs for breakfast and whoops, E misses a step. (This is Huck’s favorite part. “You’re E, Mommy!” And I have to cry “Eeeee!” Then he makes big wide eyes and round mouth: “Oh no!”) E is seriously injured and winds up in the ER (with the help, of course, of EMTs).

Since rest is a vital part of the healing process, the other letters decide to give E a break: O will stand in for his injured pal. That’s when things get wonderfully silly. Cafeteria menus announce “moatloaf” and “groon salad,” road signs proclaim the “spood limit,” and local businesses advertise “danco lossons” and “ico creom.” This is whimsy that tickles my ten-year-old just as surely as it does her younger siblings. The book is filled with comic dialogue and side jokes, increasing its crossover appeal with older kids. And the playful language has utterly entranced Rilla, my emergent reader, who thinks it is hilarious to see what happens to a word when you swap out the vowel.

The ending is perfect. Or should I say: the onding is porfoct? 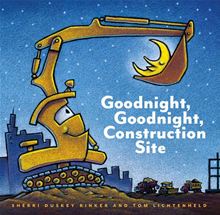 Tom Lichtenheld is one of my favorite illustrators. I discovered his work—how was I missing it??—in the wonderful Chris Barton picture book, Shark Vs. Train, that you’ve heard me rave about so many times before. Tom’s bold, energetic style crackles with humor and appeal. My kids are all drawn to his work; his illustrations are the kind you pore over, giggling at the details.

I went on a binge last week and ordered all the Lichtenheld our library system could muster. (The entire second row pictured in this link is sitting on my bed right this minute.) The resulting reading pile is a Rillabooks post-in-progress, but I could not resist interrupting myself to write about one particular book from that pile, the one that has completely enchanted my two-year-old son. 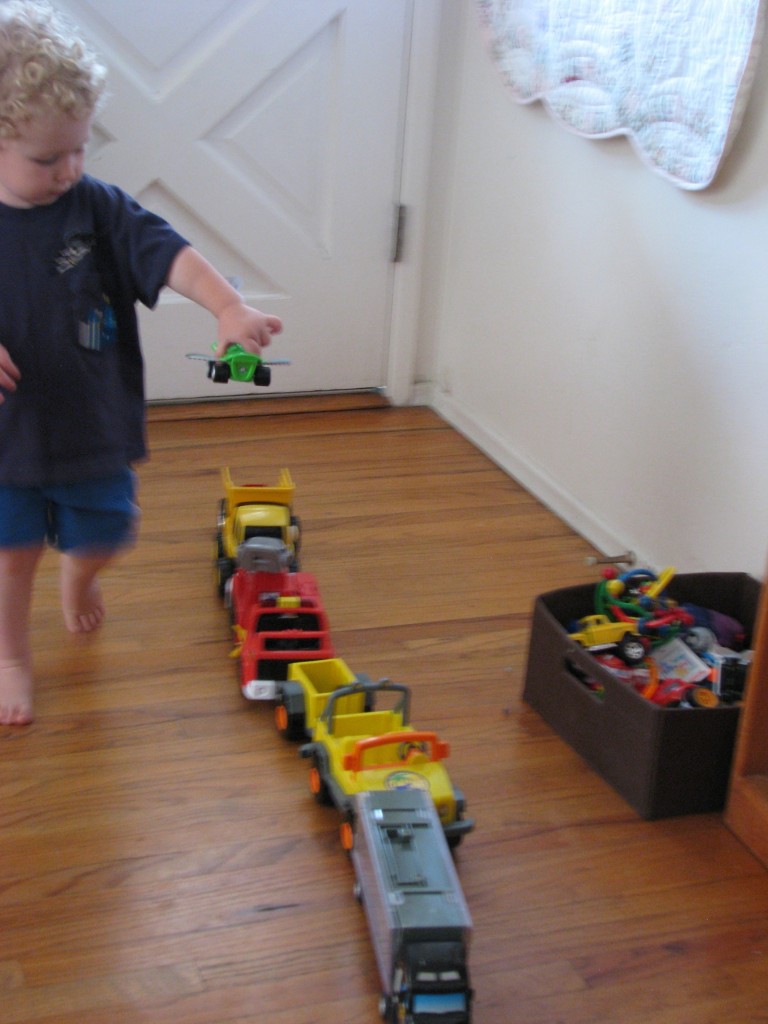 Huck’s a truck kid, through and through. Trucks, cars, and trains. Preferably half-buried in dirt. He has staked a claim on a corner of my veggie garden: it’s where the trucks grow. When I saw that Tom Lichtenheld is the illustrator of Goodnight, Goodnight, Construction Site by Sherri Duskey Rinker, I knew I’d pretty much found Huck’s dream book.

I underestimated. He is CRAZY about this book, carries it everywhere, begs for it a dozen times a day or more. It’s his Mike Mulligan and the Steam Shovel (you Ramona fans know what I mean), but I’m not in a Beezus place yet because when I read it to him, he is SO. DARN. CUTE. 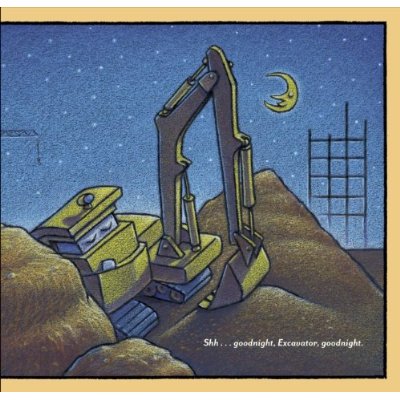 It’s a bedtime book set in a construction site. Are you thinking: that’s brilliant? Because the moment I saw it, I thought, that’s brilliant. Five big rough, tough construction vehicles finish their day’s work and get ready for bed, one by one. I wish I could show you every page of the art. If you click on the title above, you can view some images from the book. There’s a book trailer there, too, which HUCK MUST NOT SEE or I’ll never pry him away from the computer ever again.

Besides, I’m greedy for the cuddles this book gets me. My busy boy climbs into my lap and more or less acts out the book—raising an arm high when the crane truck lifts one last beam, whirling his hands when the cement mixer mixes a final load—and when the excavator snuggles into its dirt bed, Huck hugs me tight: “Now we ’nuggle, Mommy.” Ridiculously cute, right?

The best part is right in the middle when the dump truck appears. “Dat me!” he says every time.