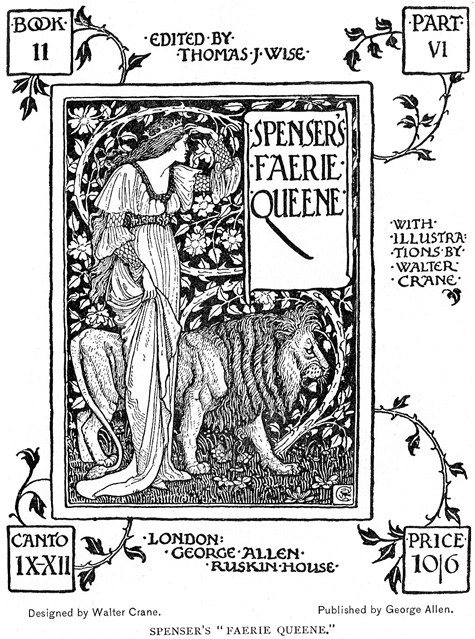 How quickly the days pass, and the reading lists pile up!

Read with the older girls:
• Landmark History of the American People, the chapter on wagon trains
• Story of Science Vol. 2, the chapter on Rene Descartes
• Poem: “The Cord” by Leanne O’Sullivan (Poetry 180)
• The Faerie Queene Book 1, Spenser, continued

We enjoyed this lovely video of screenshots from the 1894 George Allen edition with illustrations by Walter Crane.

Read to the littles:
• Caps for Sale
• Captain Invincible and the Space Shapes

On my own:
• The Giver by Lois Lowry
• revisited Lolita (sections) and listened to these three lectures on it at Open Yale Courses

Even the sick days are pretty darn great.

With Beanie: did our first week’s charting for Journey North. Mystery City #1 has very nearly the same latitude as ours, judging from its photoperiod, and Bean entertained me with a list of the countries around the globe at roughly our parallel. You see why I love this project so?

(FWIW, here’s how I described it to my local homeschooling list this morning, wanting to make it clear you don’t have to be some organizational goddess to pull this thing off: “If Mystery Class sounds daunting to you, let me just add that I forgot all about it until this morning and am sitting here in my pajamas, coughing my lungs out, hair not yet brushed, huddled on the couch calculating photoperiods with [Beanie]. A few simple math problems—she’s doing most of the work. 🙂 [Huck] is climbing on the back of the couch. Scott’s got Elvis playing. I’m checking Facebook while [Bean] does the next calculation. In case you were picturing some super-organized activity requiring a ton of preparation and concentration—this isn’t that!) 🙂

With Jane and Rose: watched the first video lecture (very short) for a Coursera class we discovered yesterday, and which Jane has signed up for: Fantasy and Science Fiction: The Human Mind, Our Modern World. (I loved the reading list. Some great stuff there, and a number of things I’d been meaning to read with the girls this year anyhow.)

The first text is the Lucy Crane translation of Grimms’ Tales, available for free download at Project Gutenberg. The instructor (Professor Eric Rabkin of the University of Michigan) mentioned the intriguing fact that the illustrations (beautiful, just my cup of tea, see below) in this edition are by Crane’s husband, Walter Crane, who wrote about book (explained Dr. Rabkin) about the role of illustration in books. Which! Got! Me! Very! Excited! And when you put ‘Walter Crane’ into Google it autosuggests ‘Walter Crane arts and crafts movement’ Which! More! Excited! Still! My cup of tea? More like my bathtub of tea, my swimming-pool of tea. And now (having spent a bit of happy, albeit sniffly, time on teh Wikipedia and other avenues) I have added Yet More Things to Read to my impossible list.

You see what I mean?

So we zapped the Lucy Crane text to the Kindle, and I read the first story aloud to Rilla—“The Rabbit’s Bride,” which I didn’t remember at all, though I thought I’d read Grimm backwards and forwards, including some of it in German. (Digression: true story: my friend Caryn and I got banned from the high-school library for a full semester in tenth grade due to uncontrollable outbursts of giggling over an assignment for our German class. Look, you spring the original version of Rapunzel on a couple of unsuspecting sophomore girls and what do you expect? Suddenly she had twins! Zwillinge! So that’s how the witch knew she was entertaining a visitor!)

(Thing is, I fervently believed I loved that library more than anybody in the whole school. Me. Banned from a library. I couldn’t believe it. My intemperate book-hoarding habits probably spring from this brief and interminable period of deprivation.)

Anyhow, “The Rabbit’s Bride.” I did not see that ending coming. Nor the middle, for that matter.

At Huck’s naptime there was cuddling (cautious, on his part: “I don’t want to get sick, Mommy”) (sigh) and at his request, another round of the much-loved Open This Little Book, which gem I’ll be reviewing for GeekMom one of these days. (Talk about illustrations to swoon for. Delicious.)

Then lots of Japan Life with Rilla and Beanie—a game we like to play, which involves massive amounts of casual math and spatial reasoning, but of course they aren’t seeing it that way, it’s just fun.

I missed out on some of my favorite parts of the day—walking Wonderboy to school and back; my long morning ramble with Scott—but by mid-afternoon I was feeling better than I have all week, and I got outside to water my neglected garden. Was relieved to see my young lettuces are looking spruce. So are hordes of weeds.

A hummingbird, a funny solar-powered grasshopper, a cup of mint tea with honey. “I can’t believe how much I’m not sick of you,” says the mug, a gift from Scott. 🙂

Two very dirty children scrubbed clean after concocting Mud Soup or some such delicacy in the backyard.

Tonight I’m missing the much-anticipated reception for the San Diego Local Authors Exhibit at the downtown library, very sad not to be there but it wouldn’t be nice to carry this cough out in public. But I’m sure there will be something nice on TV with Scott later (he DVRs the best things) and I have two compelling books in progress on my Kindle at the moment: a gorgeous collection of Alice Munro stories given to me by one of my favorite people in the world, and a review copy of a book called Washed Away: How the Great Flood of 1913, America’s Most Widespread Natural Disaster, Terrorized a Nation and Changed It Forever—how’s that for a title that grabs you and won’t let go? So far, so gripping. The levee just broke in Dayton, Ohio. Entire houses are floating away with people on the rooves. (Roofs? What are we saying these days?) I’m chewing my nails off.