“Those little stars that seemed to speckle a not too dreadfully distant blue ceiling were farther away than he could make himself think, try as he might. Those little stars must be enormous. The whole earth must be a tiny pebble in comparison. A spinning pebble, and he, on it, the astronomer, looking at flaming gigantic worlds so far away that they seemed no more than sparkling grains of dust. He felt for a moment less than nothing, and then, suddenly, size did not seem to matter. Distant and huge the stars might be, but he, standing here with chattering teeth on the dark hillside, could see them and name them and even foretell what next there were going to do. ‘The January Sky.’ And there they were, Taurus, Aldebaran, the Pleiades, obedient as slaves…He felt an odd wish to shout at them in triumph, but remembered in time that this would not be scientific.”

—from Winter Holiday by Arthur Ransome

We went for a drive this morning to look at rocks and low mountains—Beanie is studying geology, which means everyone is—and happened upon an egg farm with ostriches and ducks and a cage of finches and of course dozens of hens. Beanie and Rilla went to look at the finches, and I went inside the little shop and bought some honey from their hives. The woman in charge—wiry, gray-haired, serious-faced—was a taciturn sort, not what you’d call effusive but great of heart, for as I was unbuckling Huck from his carseat so he could get a look at the birds, the shopkeeper appeared behind me and said, “Come on, I’ll take you to meet Elvis.”

Elvis! A pot-bellied pig, it turned out, black and bristly, with a shock of upstanding hair, a veritable pompadour. Truly a King among pigs. The shopkeeper produced some crusts of bread for the children to feed him. Nearby, two large, muddy, pink, Wilburish pigs watched with envy.

“Those are pig pigs,” said the egg lady. “Bacon pigs.”

She invited Huck to come back and play with “Thomas”—her grandson? great-nephew?—whose toys were heaped outside the shop; he was at Montessori, she told us. We headed home, Beanie calling out rock types as we wound through the boulder-strewn hills. Our mountains here look unfinished, the hillsides littered with car-sized stones. For lunch the little ones ate peanut butter and honey sandwiches. “I’ve never seen such beautiful honey,” said Rose, holding up the jar to the light. “It’s almost red, it glows.”

We read our chapter of Winter Holiday—Dick and Dorothea met the Martians today—and then everyone scattered for games. We’ve got our weather back: low seventies, bright, breezy. In the afternoon, the older girls took a long walk to the library where they had some Patricia Wrede books waiting. I think that’s right; they’ll correct me tomorrow if I’ve got it wrong. 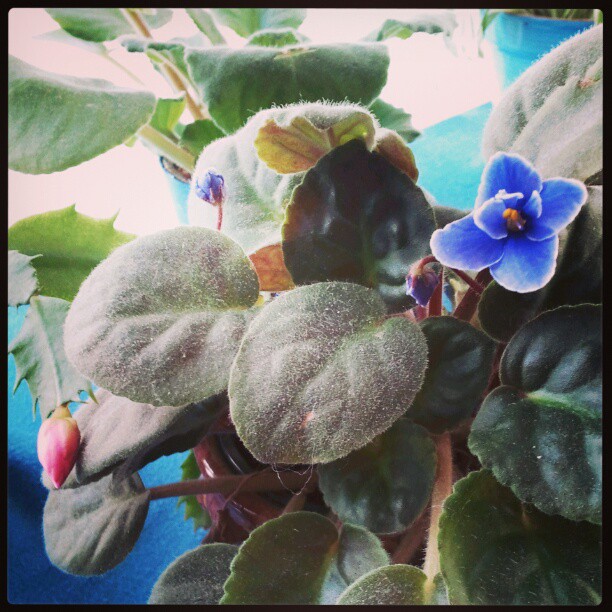 My Christmas cactus is just about ready to bloom—yes, in January—timing its display to coincide with the violets. In another two or three days we’ll have quite a show. Lettuce in the garden, daffodils in the flowerbeds, freesia about to bud. At least, that’s what was happening out back a week ago. I feel a bit detached, this week, from the world outside; it’s been downright frigid here in San Diego, and I find I’ve lost the knack of handling weather. No insulation in these little houses. Brr.

Maybe that’s why we picked Winter Holiday for the new lunchtime read-aloud. We so seldom have a winter that feels remotely wintry. It had just the right flavor for today, but it’s quite a long book and I’m wondering how all that tramping about in the snow is going to read when we’re back to our 7o-degree sunshiny days, say around Friday.

I didn’t include Morse code in my list of places our chapter of Winter Holiday took us because it wasn’t mentioned in the passage I quoted. But it was mentioned in the chapter, most enticingly. The book opens with the two children, Dick and Dorothea, beginning to explore the farm they’ve come to visit. There’s a big lake, and they see a boat with six children doing intriguing things around a large island in the middle of the lake. Readers of Swallows and Amazons know at once who these children are…oh, it’s so exciting. Dick and Dorothea long to make contact with them but aren’t sure how, until night falls and they figure out that the light in a distant window belongs to some of those nautical children. They signal with a flashlight, flash flash flash, until oh! The window light flashes three times in response. Contact! (With Mars, thinks astronomer Dick.) It’s terribly exciting.

And then the window light begins flashing in Morse code, but Dick and Dorothea can’t read it. Neither can we. This site is helpful, though we spent considerably more than the “minute” it boasts is necessary, and I can’t say we’re anywhere near mastery. Heh. More useful is the trick Jane remembered from Cheaper by the Dozen: words whose stresses match the dot-dash pattern for each letter of the alphabet, like “a-BOUT” for A (dot dash), “BOIS-ter-ous-ly” for B (dash dot dot dot), “CARE-less CHILD-ren” for C (dash dot dash dot), and “DAN-ger-ous” for D (dash dot dot). We began thinking up words for the rest of the alphabet—GARGOYLish for G, luGUbrious for L, and so on. I can now tap out “bad lad” in Morse code. Or “glad cad.” I’m sure this will come in useful someday.

“The Fairy Tales of Science”

What we read today (an excerpt; “the astronomer” is a boy named Dick, who is stargazing with his sister, Dorothea):

Dorothea joined him. He pointed out the bright Aldebaran and the other stars of Taurus, and offered her the telescope.

“I can see a lot better without,” said Dorothea.

“How many of the Pleiades can you see?”

“There are lots more than that,” said Dick. “But it’s awfully hard to see them when the telescope won’t keep still. How far away does it say the Pleiades are?”

Dorothea went back to the fire and found the place in the book.

“The light from the group known as the Pleiades reaches our planet in rather more than three hundred years after it leaves them.”

“Light goes at one hundred and eighty-six thousand miles a second,” said the voice of the astronomer in the darkness.

But Dorothea was also doing some calculations.

“Well, if the light takes more than three hundred years to get here, it may have started while Shakespeare was alive, in the reign of Queen Elizabeth, perhaps. Sir Walter Raleigh may have seen it start…”

“But of course he didn’t,” said the astronomer indignantly. “the light of the stars he saw had started three hundred years before that…”

“Battle of Bannockburn, 1314. Bows and arrows.” Dorothea was off again.

But Dick was no longer listening. One hundred and eighty-six thousand miles a second. Sixty times as far as that in a minute. Sixty times sixty times as far as that in an hour. Twenty-four hours in a day. Three hundred and sixty-five days in a year. Not counting leap years. And then three hundred years of it. Those little stars that seemed to speckles a not too dreadfully distant blue ceiling were farther away than he could make himself think, try as he might. Those little stars must be enormous. The whole earth must be a tiny pebble in comparison. A spinning pebble, and he, on it, the astronomer, looking at flaming gigantic worlds so far away that they seemed no more than  sparkling grains of dust. He felt for a moment less than nothing, and then, suddenly, size did not seem to matter. Distant and huge the stars might be, but he, standing here with chattering teeth on the dark hill-side, could see them and name them and even foretell what next they were going to do. “The January Sky.” And there they were, Taurus, Aldebaran, the Pleiades, obedient as slaves…He felt an odd wish to shout at them in triumph, but remembered in time that this would not be scientific.

—from Winter Holiday by Arthur Ransome,
one of the Swallows & Amazons books

Where it took us:

* We read the opening of “Locksley Hall,” a long and complex poem which I enjoyed thinking my way through later in the day. With the kids, I read and discussed the first several stanzas, all of us lingering especially over:

Many a night from yonder ivied casement, ere I went to rest,
Did I look on great Orion sloping slowly to the West.

Many a night I saw the Pleiads, rising thro’ the mellow shade,
Glitter like a swarm of fire-flies tangled in a silver braid.

* Of course after that we had to see the Pleiades. Discovered Google Sky. Oh. My. Goodness. Truly, we live in an amazing age.

* Spent a long time playing with Google Sky, looking up many constellations including all those mentioned in the Winter Holiday chapter. Rose told me the story of Orion being chased by the serpent, and we read the legend of the Pleiades, those seven sisters, daughters of Atlas. Beanie fetched D’Aulaire’s Greek Myths because both she and Rose wanted to read me several relevant passages.

* Hunted up our copy of Rey’s Find the Constellations and read about the different magnitudes of stars, among other things.

“Here about the beach I wandered,” Tennyson’s poem continues, “nourishing a youth sublime / With the fairy tales of science, and the long result of Time…”

I don’t know about “sublime,” and we’d have to substitute “internet” for “beach,” I suppose, but yeah, it was a pretty nourishing morning.