There Is Also Real Life Happening

And part of it is the way the kids’ minds work, and how I marvel at it. Rose mentioned that she likes to listen to “music without words” when she is reading or painting. “You know the kind,” she said, “sort of soft and dangerous.”

Soft and dangerous. I kept turning the phrase over in my mind. It’s perfect; I know just what she means. I iChatted Scott, our music guru, to ask for CD suggestions. He fired back a list. (Or rather, John Stossel did. Don’t ask me why, but that’s my husband’s current IM avatar. I think I liked last week’s pirate hamster icon better.) 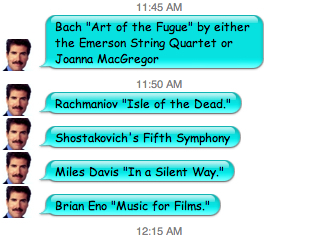 First I had to laugh for about ten minutes because John Stossel knows there is no way in tarnation I would voluntarily listen to Brian Eno. I know, musical genius and all that, but ambient music makes the fillings want to leap out of my teeth, and my eardrums shiver like aspen leaves.

When I finally stopped howling, I found the Shostakovich and put in on. This was at lunchtime; the girls were just sitting down to sandwiches. Rose listened to the opening notes of the symphony and said, “Yeah. That’s just what I meant.”

“I know what she means by ‘soft and dangerous,’ Mom,” mused Jane. “To put it in math terms, I’d call it XYZ music. You know—it’s about variables.”

I couldn’t answer. I was busy pouring milk for children who are soft, dangerous, and variable.