Booknotes in early May 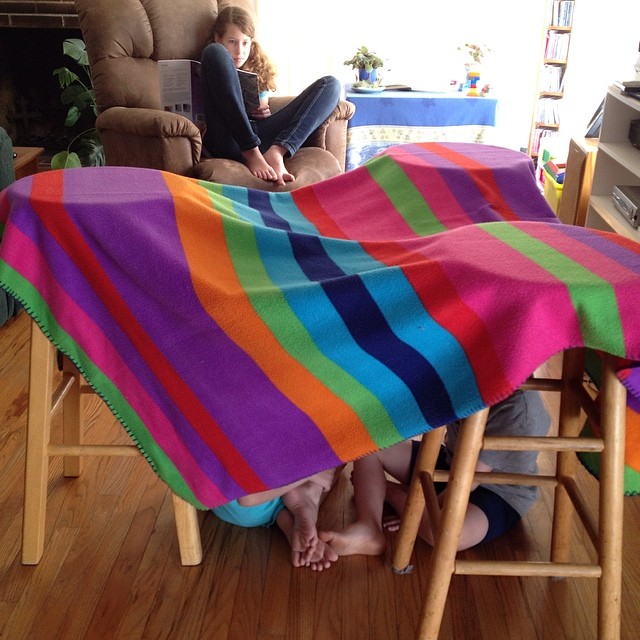 You know how you have that friend you used to talk to on the phone all the time, every day practically, so that even though you lived hundreds of miles apart, you were totally up on all the daily details of each other’s lives? And then along comes a busy week, maybe two, and you play a few rounds of phone tag, and suddenly there’s SO MUCH to catch up on that you know you’re going to need an hour, probably more, who are we kidding, and so you’re both waiting for a nice long chunk of time and meanwhile more life is happening and you’re never ever going to be able to catch each other up on all of it? Yeah, that’s how I’m feeling about my book log today. 🙂

For a few weeks there I was trotting along at such a nice clip, recording everything—not only books finished, which I’ve been faithfully logging since 2008, but fragments and sections of books, history and science chapters read to the kids, picture books, substantive internet articles, even individual poems. I’ve never kept track of my reading to such a granular degree before, and I was really enjoying it—both as a chronicle of the many branchings of my interests, and as a somewhat, for me, revelatory indication of the sheer amount of reading, challenging and otherwise, that I was doing all along but somehow not “counting.” Sigh, I only read two books this month, I might think, looking a year from now at my GoodReads tally for April 2014, forgetting the quantities of poetry I devoured that month (just no complete books of poetry, so they don’t qualify for a GR entry), the hundred-odd pages of mid-19th century American history and 17th-century science my girls and I tackled together, the Scientific American articles, the half a novel that didn’t hold me, the five or six opening chapters I sampled on Kindle, the dozens of picture books enjoyed with my younger three, the lecture transcripts, the Damn Interesting articles, the AV Club reviews. Of course it all counts. It all goes to the shaping of me, the stretching of me. My old book log, the finished-books-only kind, presents a comically, unrecognizably skewed picture. Presents this skewed picture to me, I mean—I’m not supposing that anyone else is troubling themselves about it 😉 —but future me will be much hazier about what riches were crammed in between those gaps in the record, the blank spaces between The Tuesday Club Murders and The Wheel on the School.

I’ll want, you know, to remember how that April (this April) was the month of Donne and Herbert, and of The Secret Garden, and of The Little Fur Family and The Americans (the TV show, not the James novel) and Beginning Theory—how way led to way, and reading up on Donne turned into teaching a poetry class, and how things we were reading in The Story of Science kept cropping up on the new Cosmos the very next night, and vice versa.

Until I began the granular logging in March (was it March?), I hadn’t realized how much reading was happening in the margins. Then I missed a day, and the next day there was more to catch up on, and so on and so on, and there went April. All this to say I’m going to start over (again) and see how long I can keep it up this time—and if I miss a day, I’ll let it go, like a balloon floating away into the sky, and not lose hold of the next day’s balloon in an attempt to retrieve the first.

(But if I remember what color the lost balloons were, I can say so. I remember some of yesterday’s balloons.)

Yesterday I happened upon a long piece called “Selling Henry James,” a Northwestern University professor’s account (in 1990) of his experience teaching a James seminar to undergraduates one quarter. Very enjoyable read. I got there via a Jamesian rabbit trail, which branched off a Virginia Woolf rabbit trail, which started actually last fall (and now I can’t remember why; didn’t log it!) and was rediscovered—oh, gosh, I’m losing track of the meanderings. I’ve been watching these Milton lectures at Open Yale, and I think it may have been something the professor said in one of those that made me jump back to Woolf, and then to Gilbert and Gubar’s Madwoman in the Attic, which I’ve never read til now—it took me most of last week to get through the two introductions and the first chapter, but I don’t mean “get through” in a negative sense, it was fiercely interesting reading, and amusing in that I realized, a little way in, that this is the text which most deeply informed the women’s lit class I took in college, though Madwoman itself was never assigned. That was the fall of 1988, fourteen years after Madwoman was published, and our professor was in her first year of teaching. I’ve had fun fitting these pieces of the puzzle together.

Earlier this week, still on the Woolf trail, simultaneous with Madwoman, I landed on this site and read the “Women’s Images in Literature” lectures in their entirety. Mostly for review, but like everyone I have gaps. Came away with yet more books to cram into the impossible queue.

The picture book Huck keeps asking for this week, and which I don’t mind reading over and over—the art is so lush, the colors (deep blue and gold) unusual, and the story sweet—is The Bear’s Song, which I was so glad to see make it to our list of finalists in last year’s CYBILs contest.

Rilla and I are nearly finished with The Secret Garden. Mrs. Sowerby had to conspire to send the children more food today, they’re starving all the time. I don’t want it to end.

We’ve returned to our French songs—we forgot about them for a while—”Promenons Nous Dans le Bois” and “Les Éléphants” from the on the French for Kids: Cha Cha Cha CD, mostly. And a lot of Robert Burns songs on YouTube, and (for no particular reason) this rendition of Waltzing Matilda.

The Henry James article left me in a James mood (no, I suppose the mood was already creeping over me and that’s why I googled it?) so last night at bedtime I barraged my Kindle with his books, and this morning I fell into The Turn of the Screw, which I’ve never read (I’ve only read Portrait of a Lady, Daisy Miller, and Washington Square) and can’t wait for bedtime tonight so I can (try to) return to it. The parentheses are because I’m still not managing nighttime reading, only crossword puzzles. Two nights ago I tried to read in bed. I remember nothing, but next morning when I opened the Kindle app on my phone, there was the E.M. Forster Collection open to his short story, “The Celestial Omnibus,” which I’d never read before. I fall asleep, and my finger hits the touchscreen, and the next day I find surprises, like this one. Forster was near the top of the library screen because of my binge in March. I read the Omnibus story and the next one, the one about the beech wood, “The Other Kingdom,” I think it’s called?, and then I had to go back and reread the last chapter of Howards End. (A part of me is always rereading the last chapter of Howards End.)

Before I end (with no conclusion), a James note and a James quote. The note is that, settling into (or being inexorably pulled into, I had no choice) Turn of the Screw and working, as one must, to keep up with the twistings of the sentences, I had this sudden rush of comfort—I don’t know how else to put it—of relief, really, in the realization that a thing about Henry James is that you can trust him to get you there in the end. To the end of the sentence, I mean. It’s going to have forty parts but in the end they will all hold together. I didn’t comprehend that the first time I read him, in my twenties. It’s like knowing a piece of music is going to resolve at the end of the phrase. The final chord will bring you back to the ground. Perhaps I’m a more patient reader now (now that I’m resigned to not getting through ALL THE BOOKS), or perhaps I’ve learned enough about craft over the years to know when a writer deserves my confidence. And I mean this observation only about syntax, about style—I don’t expect James to hand me the plot resolution I crave, he made that very clear at the start of our relationship (oh Isabel!)—but I find there’s an unlooked-for joy in trusting him on style.

And the quote: “Never say you know the last word about any human heart.”