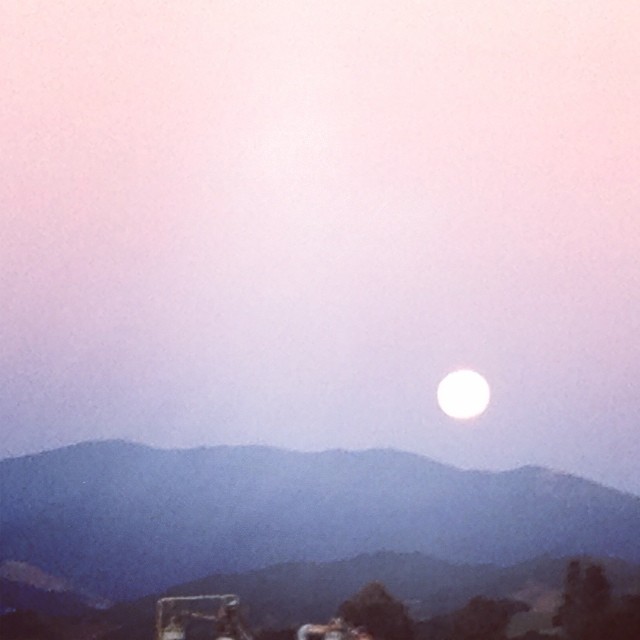 Okay so today I don’t have any photos AT ALL. Here, have a moonrise from last week. How I wish I’d had a real camera with me that evening, not just the phone. Last Thursday: Scott and I had just finished dinner at Firestone Brewery in Buellton, CA, where we stopped for the night on our way to pick up Jane from school. This silvery disk rising up over the green hills was impossibly, staggeringly enormous. We had to pull over and marvel at it. I think it was a day short of full. Glorious.

Jenn left a sweet comment on yesterday’s post about loving that kind of slice-of-life blogging. Me too, especially from blog-friends I’ve been reading for so many years now. How strange it is, sometimes, to think of all we’ve been through together without ever actually having met in person. We watch each other’s children grow up; we see books dreamed of and toiled over and published. We’ve seen each other’s blogs through many iterations. The ones I love best are what I now think of as old-school. Old, you know, like way back in 2006. I began in ’05: this January will be ten years. No wonder some of you were stunned to realize that’s how old Wonderboy is. He was a baby when I began, just a year older than this blog. It doesn’t seem possible I’ve been at it this long.

Anyhoo. Today. 🙂 Another errand-y day that chopped up the rhythm I anticipate we’ll fall into next week or sometime soon. Jane started her internship today. We’re still sorting out transportation details but for now I’m going to taxi her, which means I’m suddenly revising my plans to include outings on the west side of town. A friend is planning bimonthly beach days at a time and place that dovetail nicely with Jane’s hours, and then there are our Balboa Park explorer passes whispering our names. I’m kind of psyched to have a logistical reason to have to get out the door.

So this morning Scott went with me to drop Jane off, just for fun, and when we got back it was time for me to take WB to his audiology appointment. Had a crackly hearing aid in need of servicing; he’s now down to just one for a week or two. On the way home we stopped at the farmer’s market and bought an astounding quantity of fruits and vegetables for four dollars. We’ll be making salsa tomorrow.

By the time we returned home, the others had finished lunch. WB and I ate and then I had a little window in which to read a chapter of Charlie to the trio. Roald Dahl, bless you and your short chapters. Back I went to fetch Jane. Rilla watched some My Froggy Stuff videos (a discovery via Karen Edmisten) and there was a Signing Time in there somewhere. Carrots and peanut butter for a morning snack. Oh, and Rose and I managed a Spanish lesson before the whole taxi shift started. We’re using a book called simply Basic Spanish Grammar (2nd edition) which I found on one of our shelves…no idea when or how I acquired it. It’s a nice little book, clear and brisk, a good complement to her Memrise vocabulary studies.

(The Duolingo and iTalki posts I promised before I got sick are still in the works. Later this week, I hope.)