Photos from my SCBWI talk on middle-grade and chapter books 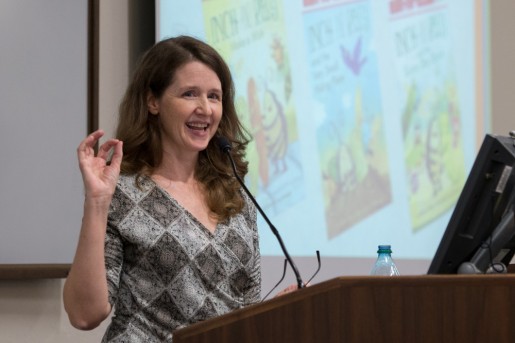 The talented Roxyanne Young took these photos of my talk on Middle-Grade and Chapter Books at SCBWI-San Diego last weekend and kindly gave me permission to use them. My school visit/speaker page needs a massive updating and I’m so grateful to have some recent images to include.

Apparently I talk with my hands a lot? What’s funniest to me is that this Boston Bay slide was onscreen for barely a minute. That’s an awful lot of glasses-waving going on there. 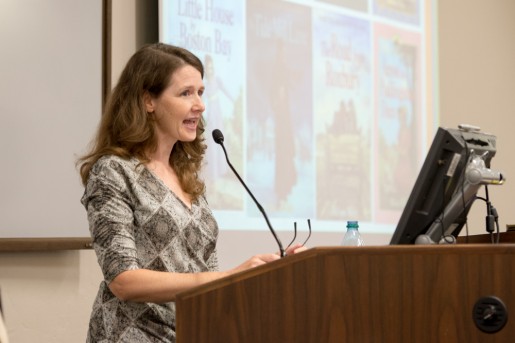 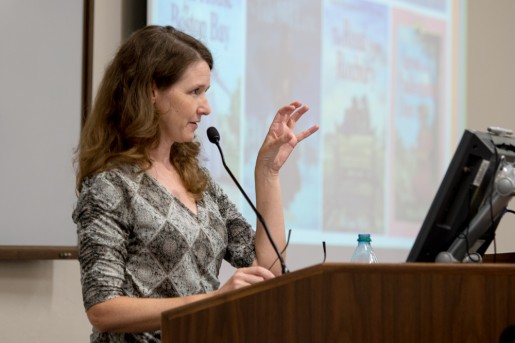 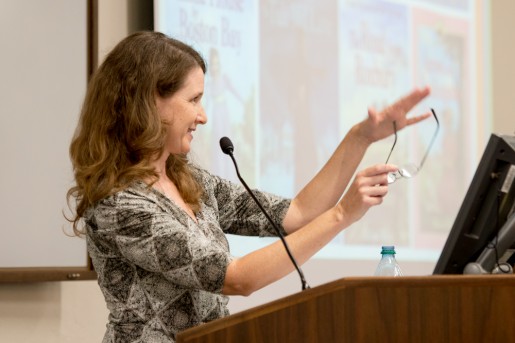 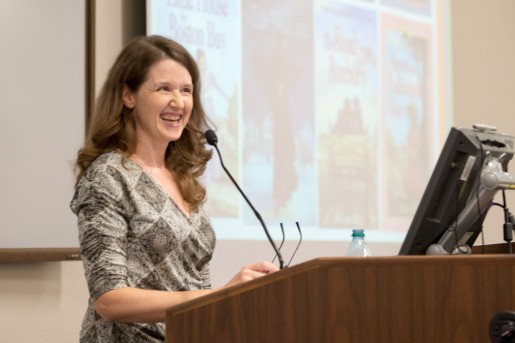 The rest of my slides were all about other people’s books—my favorite things to talk about, as you know. Here’s a taste: 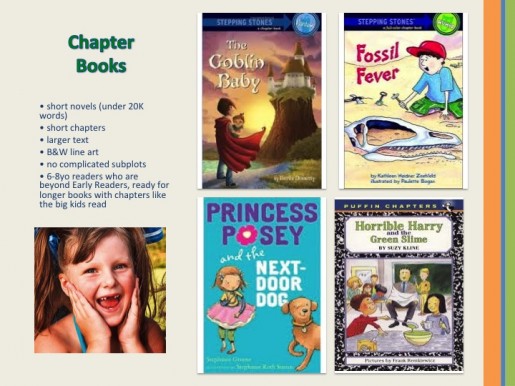 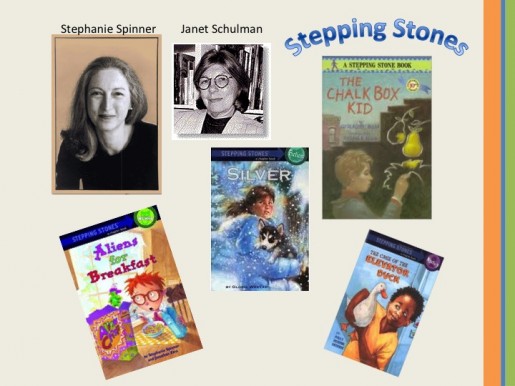 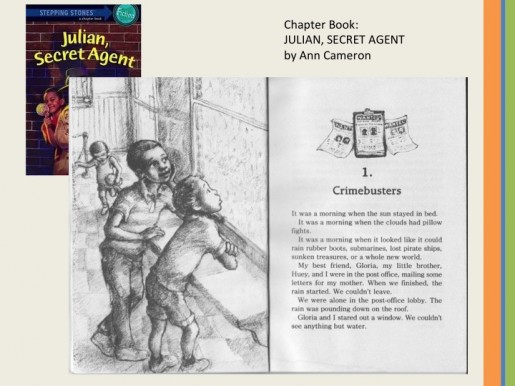 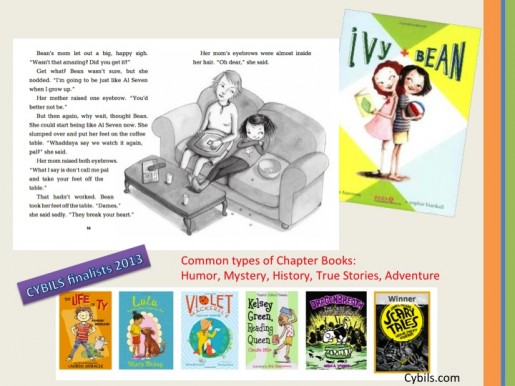 (Just a sampling from the Chapter Books part of the talk.)

I’m still answering questions in the Open Thread comments (and will continue bumping longer answers to new posts, like this one).  Stephanie wrote:

I would love some suggestions for my 2nd grader – we are going to be covering Ancient Civilizations (Greeks, Romans, China) this coming school year and I’m wondering what read-alouds or chapter books you would suggest to her. She is an advanced reader so I’m looking for both books that would challenge her plus ones I could read to her with younger siblings. I’ve never tackled Greek myths before and need some age appropriate guidance! : )

I replied with a list of things we’ve read & enjoyed. I know there are lots and lots of other good books on these topics; this is just a sort of top-of-my-head collection of standouts from my family’s experience. And linking things nicely takes more time than I have this afternoon, so pardon the dashed-off character of this post.

UPDATED 6/21 to add a book I forgot—possibly Rose’s favorite besides the D’Aulaire. Adventures of the Greek Heroes by Mollie McLean & Anne Wiseman, a book she read so often I had to buy a second copy to replace the tattered, brokenbacked, page-shedding first copy.

D’Aulaire’s Book of Greek Myths is the main one, the book that has enchanted every single one of my girls from age four on. (Neither of my boys are ready for chapter books yet; see this comment for more on that.)

(D’Aulaire’s Norse Myths is another tremendously and enduringly popular book in these parts. Also the Trolls collection.)

Mary Pope Osborne has a lovely Greek myths collection as well. (And I’ll add, though off topic, a cheer for her Favorite Medieval Tales, a book I myself adore.)

A bit older, of course, and my kids go nuts for all things Percy Jackson.

Jim Weiss has several Greek myth cds—they + D’Aulaire are what sparked my Rose’s interest in Ancient Greece at age five, a passion that endures to this day. (Though lately she’s more into Egyptian mythology.)

Odds Bodkin has an Iliad storytelling CD—we checked it out once years ago after hearing many rave reviews, but I think I jumped the gun; the graphic snakes-eating-the-daughters-of-Laocoön part in the beginning terrified my tiny girls. I’m sure they would listen with relish these days, bloodthirsty lasses that they are.

Oh, another big hit has been Famous Men of Greece by John Haaren (you can read it for free at Mainlesson.com). That one focuses more on historical figures (some legendary) than gods & goddesses.

Also, the Ancient Greece chapters of A Child’s History of the World.

As I said, there are oodles of other good books on Greek myths & historical figures, but these are the ones I can vouch for as having engaged my own children across a wide age span.

Oh, and for a while, they were crazy about this website where you can follow the adventures of some cartoony Athenians and Spartans.

Here’s a post I wrote in 2006 about Rose’s passion (age seven at the time) for Ancient Greece: What the Tide Brought In.

And one from another round of enthusiasm in 2009: This Week in Ancient Greece.

(That post reminded me, duh, of Padraic Colum’s The Children’s Homer, which Rose devoured that year. And that was the year I read huge chunks of The Iliad and The Odyssey to the girls—my college texts, not children’s translations, and they were so into it! Ages eight, ten, thirteen, roughly, I think? I can’t be bothered to do the math. Anyway, I mention this not at all in a braggy sense but quite the opposite: there’s a reason those cracking good tales have endured for centuries. They GRAB you, even if you’re little.)

I know the original question asked for Ancient Rome & China suggestions too; will tackle those in separate posts.

**UPDATE! Be sure to see the comments for great suggestions from other readers!**