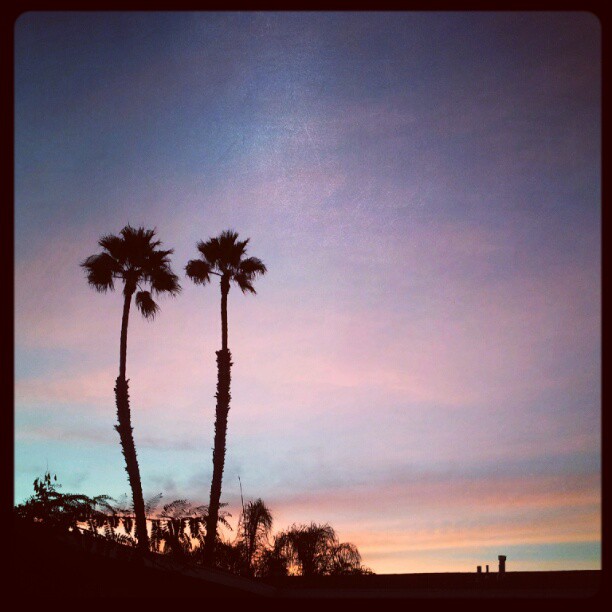 From our sunset walk the other night.

Heading out soon to sign books at the California Reading Association conference, but before I go, some gems to share:

I love Huck so much, I want to just hug anyone else who loves him too. Specifically, I love that other people appreciate Huck, are fond of him, are proud of him – part of the human experience of love. Everyone who reads Huckleberry Finn, and feels like I do about the boy, has know the same love I have felt, and that connects us on a profound level.

Author/illustrator Jon Klassen on I Want My Hat Back (which we loved):

In a way, it’s a story about empathy or lack of empathy. The idea with the rabbit was capturing indifference. The characters’ expressions barely change with just some movement of their eyes. If the rabbit is too characterised, then he becomes too cute. If he shows no reaction, then it’s okay to want consequences for him. When you’re a kid and you’re being picked on, this is the big question: what do you do when you actually find the person who’s done something wrong to you and they’re indifferent? Amoral. They’re blank. The bear can’t talk to the rabbit and can’t reason with him. So the only thing he can think of doing is to eat him. I’m not endorsing it but it’s what you can feel like doing!

Saturday Review of Books at Semicolon—add your recs in the Mr. Linky.

I loved this post by my fellow GeekMom Judy Berna about a major development in the world of prosthetic limbs:

Residual limbs often change in volume. Heat, humidity, weight loss, weight gain…. There are many reasons a socket on a prosthetic leg might not fit correctly. When I take long car rides it’s not uncommon for me to take my leg off and throw it in the back seat. It gets too tight when I sit for too long.

When I walk a lot, ride my bike, or am generally very active, my residual limb shrinks. If I’m extra good about watching what I eat and drop a few pounds, my leg shrinks. I’ve even noticed that when I’m sick for more than a day or two, my leg will temporarily shrink.

To those of us in developed countries, the answers are easier. If I have a volume change in my leg (like losing weight and keeping it off…. I’ve heard rumors that can happen) I can just schedule a five-minute visit to my prosthetist. With a few socket adjustments, I’m once again comfortable. For a Haitian farmer, it’s not so easy. Once his limb changes shape or volume, he’s out of luck. If he needs adjustments, there is no local prosthetist to tweak his fit. He’s left living with a leg that isn’t comfortable and eventually unusable. Joe couldn’t stop thinking about the Haitian amputees he’d left behind and wondering how he could help them have a better quality of life.

A few years later Joe found himself on the ski chair lift, taking a call from a patient as he took in the mountain views. His patient desperately needed one of those five-minute adjustments before she left town later that day. But for that to happen Joe would have to cut short his ski date on a blue bird powder day and drive all the way back down the mountain, just for a five-minute tweak. Once again, this time for more selfish reasons, he wished his amputee patients could adjust their own leg sockets.

And then he got an idea…

Tags: Huckleberry Finn, I Want My Hat Back, Jon Klassen

Is there anything in the world more happymaking than the artwork of a small child?

Perhaps the artwork of a small child inspired by a favorite book. Remember how much my whole family (seriously, every single one of us from 42 to 2) enjoyed Jon Klassen’s deliciously startling I Want My Hat Back?

Rilla was moved to attempt her own rendering of the bear at the pivotal moment when he recalls where he has seen his lost hat. That may be my favorite page in the book—the visual shock of the red background so perfectly captures the drama of the bear’s epiphany, and hints at the outrage he feels. Now she’s working on a page from another family favorite: Don and Audrey Wood’s The Little Mouse, the Red Ripe Strawberry, and the Big Hungry Bear. “Don’t ask me any more questions.”

I Want My Hat Back by Jon Klassen. Published by Candlewick.

I think the best way to tell you about I Want My Hat Back is to describe my family’s reaction to it. I was sent a review copy by the publisher (the official pub date is Sept. 27), and I began reading it right out of the package, standing in the living room. A bear has lost his hat, and he wants it back. He asks a fox; the fox hasn’t seen it. He asks a frog; no luck there either. He asks a rabbit—a rabbit who happens to be wearing a pointy red hat.

“No. Why are you asking me,” replies the rabbit. “I haven’t seen it. I haven’t seen any hats anywhere. I would not steal a hat. Don’t ask me any more questions.”

By this point I’m laughing out loud and I have to go right away and show the book to the rest of my family. This book is begging to be read aloud by a daddy like Scott.

They’re in the kitchen, Scott and my three older girls, ages ten, twelve, and sixteen. I thrust the book before their faces, you’ve got to read this, and we stand there turning the pages together. At the rabbit’s remarks, the girls burst out laughing. The animals’ deadpan expressions and terse, uninflected dialogue make this exchange viciously funny.

We’re huddled around the book, reading on silently. The bear asks many more animals, with no success, and finally flops down in the grass and stares at the sky. My poor hat. I miss it so much.

And then the bear remembers where he’s seen it. I’m not going to say what happens after that, but it made my daughters shriek with laughter and shock, even the teenager. My husband gasped. I howled. Rilla, when we read it to her later, chortled wickedly.

I don’t think everyone will approve of the ending. I’ve had three-year-olds who would be very upset by the turn of events. Most six-year-olds I’ve known would, I think, embrace it with glee.

Today I tweeted, “I really want to write about a certain book but various children keep spiriting it away from my stack.”

And my husband replied: “I have not seen that book. I would not take that book. I don’t know what a book is. Stop asking me questions about a book.”

Updated: How Rilla was inspired by the art.