What I read today: Wednesday

Early a.m.: Middlemarch chapter 12.
Particularly struck by how skillfully Eliot builds tension in the first visit to Stone Court—Featherstone ordering Fred to get a letter from Bulstrode averring he doesn’t believe Fred made promises about paying debts out of his expected inheritance. How rapidly this escalates! Featherstone has already made it clear to his sister, Mrs. Waule, that he thinks the rumor is “stuff and nonsense…a got-up story” and he defends Fred against her insinuations. “Such a fine, high-spirited fellow is like enough to have [expectations].” But then after Mrs. Waule leaves, Featherstone whips out the accusations, almost teasingly, and the order to get a letter from Bulstrode has the air of a whim, at first. And suddenly there Fred is in a terribly awkward situation that is only going to get awkwarder, and eventually quite serious. It’s a gripping conflict, it puts us squarely in Fred’s corner while leaving us under no illusions that his imprudence (those fine high spirits) has helped put him in this pickle. Featherstone is utterly believable, a difficult person who enjoys being difficult, and who enjoys having scraps of power over people. All the rest of the morning my mind kept coming back to this scene, picking over how artfully Eliot created a major conflict (in plot terms) out of a fragment of gossip.

Midday: Finished Underfoot in Show Business.
Am now bereft: it was the last (well, the first for her, but the last for me) of Helene’s memoirs. I wish she’d written five more. The tales in this one: so rich! That first summer she spends at the artist’s colony—sitting down at the desk in her quiet studio and seeing Thornton Wilder’s name written on the plaque listing all the previous occupants of this cabin. He’d stayed there in 1937; she realizes he’d written Our Town in this very spot. For a moment it throws her—I completely understood that wave of comparative despair—until she registers that in the long list of writers under Wilder, there’s no one she ever heard of. This makes her feel better, and then she’s able to work.

What I read today: Tuesday 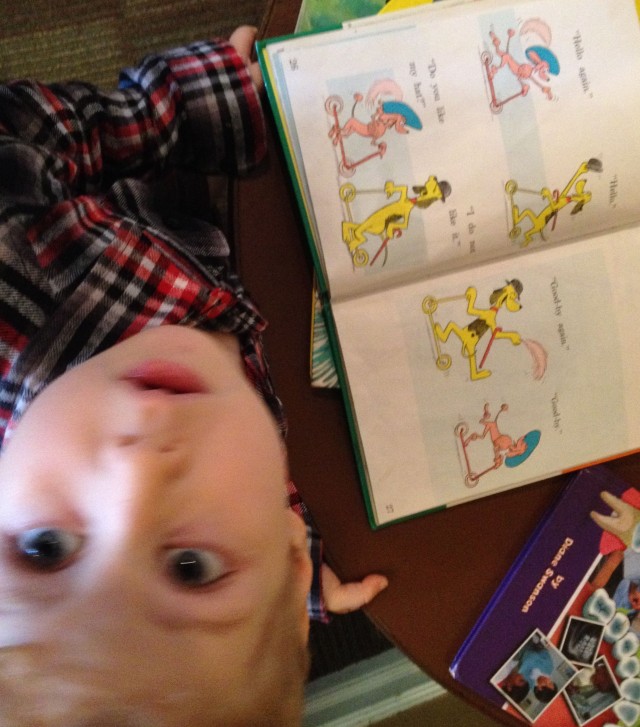 I’m not going to have time to write anything thinky in the next couple of weeks, but I thought I might try jotting down a few quick reading notes each day, just to keep the blog warm.

Last week I decided to try something new: instead of reaching for my phone and checking my mail when I wake up, I’m reaching for my phone and reading a book. My boys wake up très early and get to watch TV for 30 or 40 minutes before Scott and I drag ourselves out of bed. Usually I use that time to doze, and then check in on everything that’s piled up in my inbox during the East Coast’s head start on the day. But I’m always grumping about not having enough time to read—I fall asleep three pages in, every night—so I thought I’d give a morning reading session a go. It’s been quite nice. I have eleventy-thousand books queued up, so naturally I decided to reread Middlemarch. (I’ve given up trying to figure out my capricious reading whims anymore. If a book insists it wants to be read, I read it.)

This is my third trip to Middlemarch. Read it first the year between college and grad school, when I was working as a publicist for my undergrad alma mater’s drama department and trying to fill in gaps my English degree hadn’t. Loved the novel, had trouble settling on anything else for a long while after. Reread it a few years ago—I could check my archives here to find out when—and loved it even harder. And now here I go again. Why is it I’m hollering at Dorothea every time and yet she still goes and marries him?

So anyway, this morning it was a chapter and a half of Middlemarch (enter Fred Vincy, munching on a grilled bone).

Later: the first section of Sir Gawain and the Green Knight with Rose and Bean.

Poem: “The Summer I Was Sixteen” by Geraldine Connolly.

After lunch: a couple of chapters of Helene Hanff’s Underfoot in Show Business, which is making me deliriously happy.

No picture books! Made a Staples run in the early afternoon that ate up our Rillabook window.