Posts Tagged ‘Salt to the Sea’

Did you catch the announcement on Tuesday? Here’s a list of the winners—happy reading!

The YA Fiction winner was Salt to the Sea by Ruta Sepetys, which I raved about a few weeks ago.

This harrowing historical novel follows the lives of three young refugees seeking freedom and safety in East Prussia as World War II nears its end: Lithuanian Joana, a nurse burdened by guilt; pregnant, Polish Emilia; and Prussian Florian, a German army deserter carrying a valuable secret. A bumbling, delusional young Nazi soldier, Alfred, also narrates from aboard the doomed ship Wilhelm Gustloff—the eventual destination of the three protagonists and their small band of traveling companions. The ship, packed far beyond capacity with thousands of desperate refugees, is struck by Soviet torpedoes in the icy Baltic Sea. Joana, Emilia, Florian and the others must draw from their nearly tapped-out resilience as they try to survive the greatest maritime disaster in history.

Meticulously researched and brilliantly written, this stunning and devastating story will captivate readers. Sepetys shines a light into the everyday life of the citizens of Nazi Germany and the occupied areas, with many parallels to the modern-day refugee crisis. Each character has secrets that unfold gradually and converge with others in unexpected ways, showing the varied effects of war on the average person. The narrative voices are distinct, well-drawn, and, with the exception of Alfred (a vile coward who fulfills a necessary role), sympathetic. Even secondary characters, such as the Shoe Poet and the young orphan boy, are vivid and compelling. Tightly paced and filled with constant peril and action, the story moves quickly, with the rotating viewpoints and short chapters aiding in the momentum. Though the setting is one of overwhelming tragedy, the growing connections between the courageous travelers render the narrative less bleak. This powerful, haunting, and immensely readable novel has wide appeal. Readers will not soon forget Sepetys’s vivid characters or the story of the Wilhelm Gustloff.

We’ll be making our way through the picture book and other shortlists in the coming months. Always a highlight of my year.

This was my first year as a Category Chair. Quite an experience! I’m so impressed with the smarts and and dedication of my two judging panels. I’m already looking forward to next year. 🙂

Tags: Cybils, Salt to the Sea 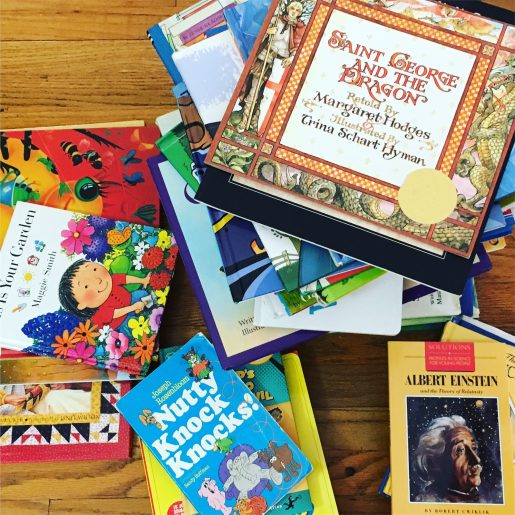 In addition to the household Fresh Start cleaning spree, the New Year always means an overhaul of my sidebar here on the blog. It begins with the year’s reading log, which must be transferred from sidebar to its own page. (In 2016 I got smart and started the page early—but then Cybils overtook my reading life and the page remains, as my sidebar note says, about thirty books behind. Perhaps more like 27 today. I’m getting there, book by book.) The empty space under the current year’s heading always drives me crazy until I’ve finished a book. Lots of years, I find time on January 1st to read a short children’s novel—last year it was Miss Happiness and Miss Flower—just so I can remove the placeholder text and enter an actual book title. I roll my eyes at myself while doing it, but I do it all the same.

Except I haven’t done it this year. Too busy sparking joy with every book in the house. I’m reading Cat’s Cradle, because I never have and Scott asked me to. 🙂 We often slide each other reading requests, wanting our frames of reference to be shared as much as possible. When Jane was a newborn, Scott would read aloud to me while I nursed her. We started with some childhood favorites the other had missed—The Great Brain (his); Harriet the Spy (mine). (You haven’t lived until you’ve heard Scott’s Ole Golly, let me tell you.)

Cat’s Cradle isn’t a long book, but this week’s pattern of cleaning frenzy in the morning and brain-work in the afternoon has left me too tired to make it through more than a few pages when I hit the pillow at night. So the gap remains.

The reading log is my sidebar equivalent of Flylady’s shiny sink. Once it’s been updated for the year, I have to start moving other things around. As the year’s book log grows longer, it throws columns off balance. I rearrange things and in January have to arrange them back. Which leads to a reassessment of what else is occupying space there. I’ve nixed some bits this year, tried to make the informational bits up top more compact so you get to the part that contains actual content—the recent comment widget and the “Caught My Eye” links—more quickly. I let the links section slide a bit during Cybils season, but I’m planning to use it more actively now, entering short remarks on the shared links so that section is more like a mini-blog within the blog. I know from your comments in the past that some of you do click through to see if I’ve added new links, which makes me so happy. 🙂 I’m glad you find them useful or interesting.

I’ve found a way to add links to this section directly from Feedly—very convenient! But I have to go in manually to add commentary.

At the bottom of my sidebar you’ll find a new addition: a “Blogging Like It’s 2005” blogroll. Yes, a blogroll—seriously old-school! This is the fruit of a conversation on my Facebook page. I asked my FB friends questions whether they still read blogs, and if so, do they use a feed reader like Feedly or Bloglovin, or do they rely on social media for notifications of new posts. I was surprised to discover that almost everyone who answered said they pretty much just click through on links from Facebook or Twitter.

It gives me the shivers to think of relying on the caprices of Facebook to find out if blogs I love have new content up. I will forever mourn Google Reader, but Feedly does the job pretty well for me—and has some nifty post-sharing functionality that comes in quite handy, as I mentioned above.

But I seem to be in the minority. Now, until this conversation I was posting my own blog links on FB only sporadically, because 1) I hesitate to spam my friends’ feeds with my own content; and 2) Facebook’s tricksy algorithms have a way of downgrading your updates if they too frequently contain links to the same website. Which means there’s no guarantee your friends will see your new post links, even if you do put ’em on FB.

But that’s fine, now that I know people prefer to see blog updates in their newsfeed, I’m happy to comply. And I have to say I’ve been thrilled by all the discussion happening in the comment box this week—thank you all for taking the time! 🙂

Well, as I said, this FB conversation led to a burst of wistful reminiscing about the lively blog community of old. A few of us decided to try to revive the spirit of those days by posting more often, more chattily, and by making an effort to comment on one another’s blogs. Thus the new blogroll. Let me know if you’d like to be included.

Today’s picture book: well, so far we’ve only read Hedgie’s Surprise again. (“Because I love it so much!” Huck pleaded.) But I found Jan Brett’s The Wild Christmas Reindeer mixed in with non-Christmas books (so we missed it), and I think since we’re on a Brett kick, it’s what I’ll read tonight. I did begin The Firelings last night, by the way. Huck had played outside all day and fell asleep two pages in. And today I happened upon The Minstrel in the Tower, which is a nice short readaloud that I haven’t done with this set. I’m contemplating holding off on Firelings for now.

I’d like to start sharing thoughts on some of the Cybils nominees I read this fall. To begin with, here’s the blurb I wrote for one of our finalists, a beautiful historical novel called Salt to the Sea.

As the Nazi Reich collapses and the Soviet army sweeps across the East Prussian countryside in the winter of 1945, three young refugees find themselves thrown together among the crowds of desperate, uprooted travellers. The distinctive voices and histories of Joana (“the nurse”), Florian (“the knight”), and Emilia (“the Polish girl”)—each guarding painful secrets—create a harrowing picture of the lives thrown into tumult by the war. A fourth narrative voice, the self-aggrandizing declarations of a young Nazi soldier named Alfred, adds an unsettling counterpoint to the narrative. The fates of the four narrators will converge at the doomed MV Wilhelm Gustloff, a German ship targeted by Russian submarines. Ruta Sepetys brings authenticity and heart to this moving, gorgeously realized work of historical fiction.

It’s hard to pull off good historical fiction, and even harder (in my opinion) to manage multiple narrative voices gracefully. Sepetys excels at both endeavors. Her characters have lodged in my heart—particularly the old shoemaker, whom you’ll meet on the road. Highly, highly recommended.

I’ve been so busy this week, I haven’t had time to explore the other Cybils categories. We always try to read as many finalists as we can, especially the picture books! Time to fill up my library cart…