There’s just always SO MUCH TO TELL, you know? Argh.

Okay, first: I went to five panels. I would like to recap each one. My recap of the SUPERCOOL Teen Comics Workshop is up at GeekMom. That leaves:

• Books vs. Graphic Novels and Comics—authors who write both talked about the differences.

• Comics in the Library—fantastic panel of librarians speaking about how they built comics/graphic novel collections in their branches.

• Comics for Teens—(not to be confused with the aforementioned Teen Comics Workshop). This one was all authors. Moderated by Scott Westerfeld. Excellent. (My GeekMom recap is here.)

I don’t know which I’ll recap here, and which at GeekMom, but I’ll add the links to this post either way.

Now for my con diary. I went in alone on Thursday morning—Scott had a book deadline, and he was also celebrating not having to WORK at the con for the first time in five years. I had a full slate of panels I wanted to hit; of course I only caught two of them. You never get to do as much as you think you will. So much of the day is spent walking from one end of the enormous building to the other.

I started off with a tour of the floor. The crowds weren’t too heavy yet, and I half wished I’d brought some kids with me instead of saving their visits for the weekend, which were sure to be packed. (Indeed they were.) But I kept bumping into friends at their various booths, so it’s probably just as well my girls didn’t have to stand around and wait while I gabbed. Catching up with chums I pretty much only see once a year is one of the best things about SDCC, for me.

I ran into our pals Marc Bernardin and Adam Freeman and snagged a copy of their kids’ comic, Jake the Dreaming, which I’m eager to read as soon as I catch my breath.

And right around the corner from them was my local author/illustrator friend Eric Shanower, whose graphic novel adaptation of L. Frank Baum’s The Marvelous Land of Oz (with gorgeous art by Scottie Young) would win an Eisner the next day.

I explored the booths for cool stuff and found a lot to fall in love with: the little marshmallow doll I mentioned at GeekMom, and some Gama-Go shirts, and about seventy-eleven books.

I restrained myself and didn’t buy the books: those things are murder on your shoulders by the end of the day.

I also didn’t buy these shoes.

I did buy this ninja kitty shirt, but it turned out to be too small so I had to give it to Jane. ::shakes fist::

I may have gone home with some Uglydoll loot. Uglydoll creator David Horvath was there, signing autographs. He and his wife seemed awfully nice.

I wandered the aisles, marveling at cool displays like this Lego Boba Fett.

By now it was well past noon, and I had to hurry upstairs to catch the Books vs. Graphic Novels and Comics panel. More on that later, I hope?

The charming Matt Holm, illustrator of Babymouse and Squish, was on that panel, which was part of why I wanted to go.

After the panel, back down to the main hall—this time to the Artists’ Alley end. Looked for some friends, found a few, gabbed awhile. Got hungry, devoured a pretzel dog. I don’t even like hot dogs, but this was delicious.

And then suddenly it was 4pm and I had to rush back upstairs to the Comics for Teens panel. I made it with five minutes to spare, and that’s where I encountered that wonderful Neo-Victorian biologist and her mom that I posted about at GeekMom. What’s funny is I was so enchanted by Linden’s costume that it took me a while to notice that the man she was chatting with was Scott Westerfeld.

And after the panel, I took my weary self to the trolley and made my way home to show the kids our loot. Scott and I were supposed to go back downtown for a party, but (shhh)…we didn’t. 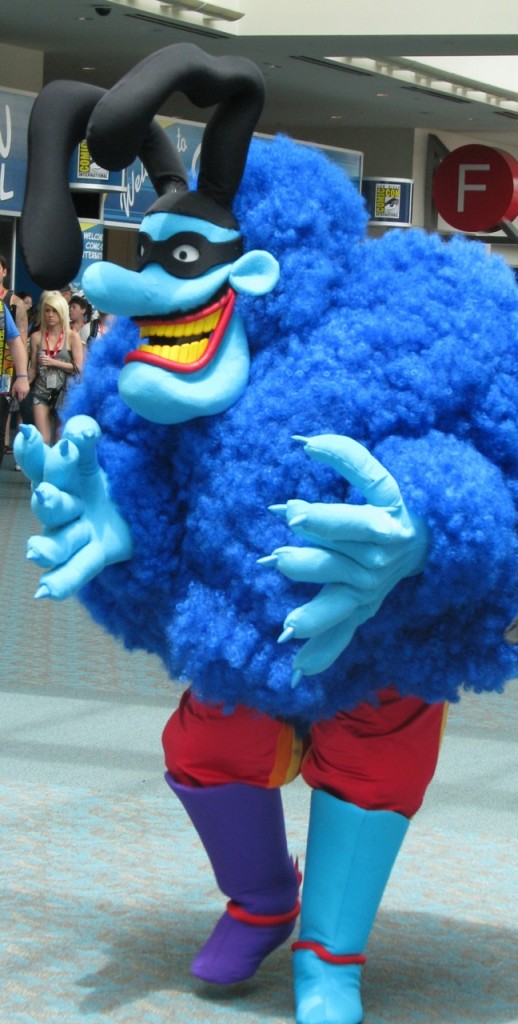 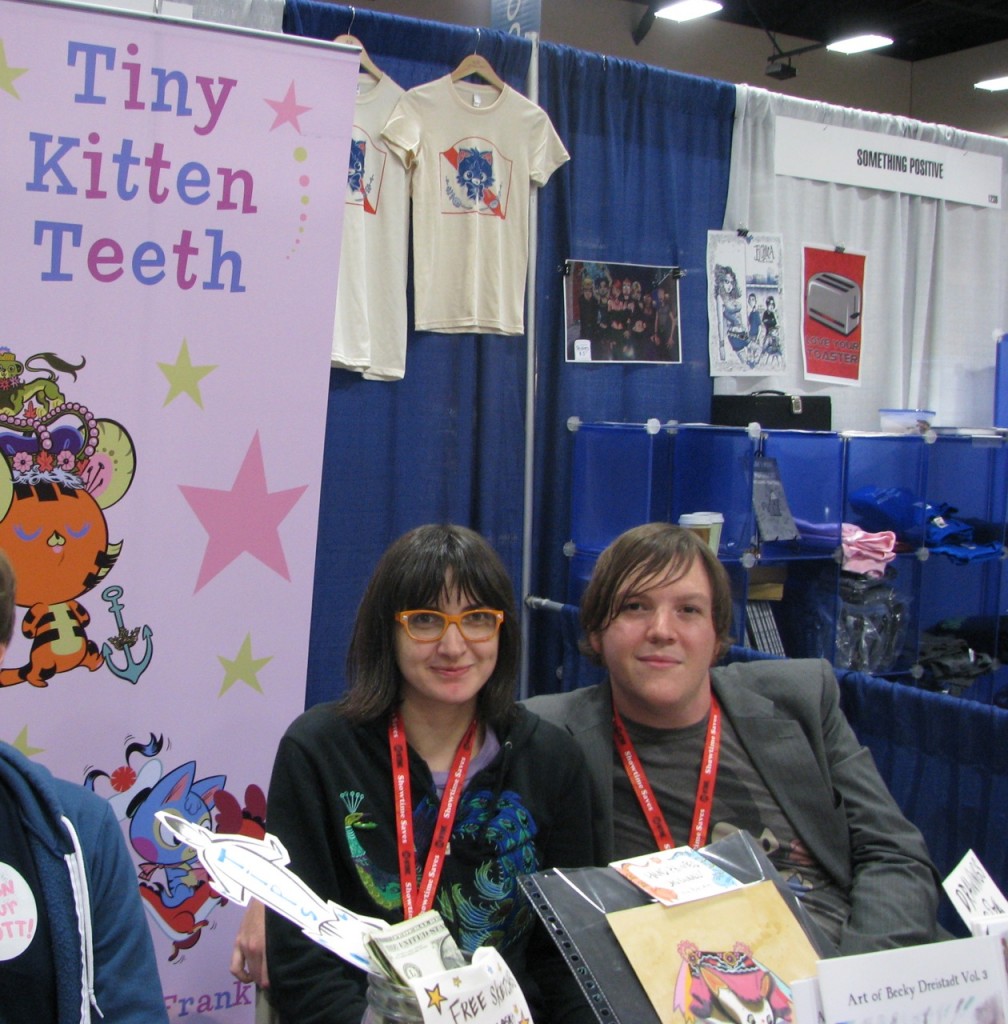 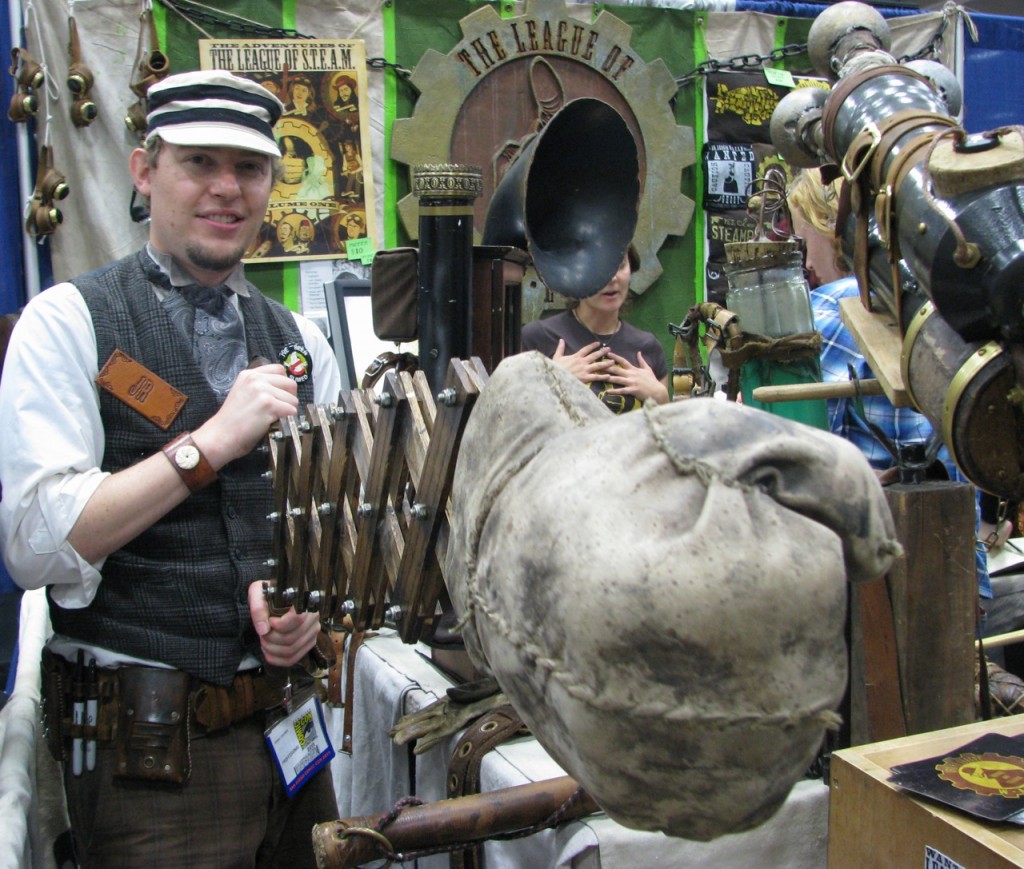 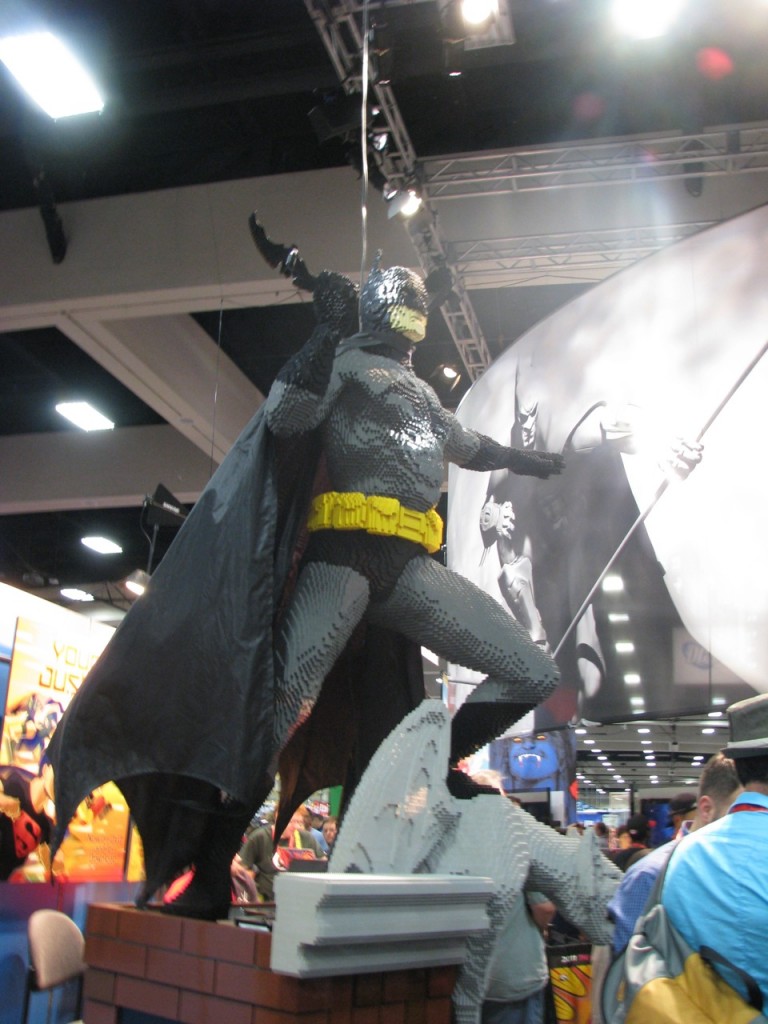 I’m running out the door this morning, so no time to write. Lots to tell when life slows down next week, though!

This week is always such a blur. I’ll spend most of next week writing it all down…for now, a few quick photos to share. This photo is as blurry as the week, but it’s such a quintessential Comic-Con moment I can’t resist sharing. For the best costume I saw all day, visit my GeekMom post!

It’s that time of year again…

When San Diego Comic-Con swallows up my life.

I’ll be posting about it as usual, both here and at GeekMom. And tweeting from the middle of the madness, no doubt.

I’m pleased that my cellphone photos will automatically upload to Google+.

As usual, I’m poring over the schedule, trying to figure out what panels to attend…got requests?

It’s a week after Comic-Con and I’m still working through my notes! Two more panels and another booklist to post, and then it’s likely to get quiet around here for a spell.

I scrawled a crazy amount of notes at the Once Upon a Time panel—six authors of epic fantasy discussing their craft—but the odds of my being able to translate the scrawl to English are slimmish, so never fear. This was a fascinating panel. (Hence the 12 pages of notes.) Have I mentioned I love hearing other writers talk about their work? Yeah.

The panelists, in order of seating: Brandon Sanderson, Brent Weeks, Lynn Flewelling, Megan Whalen Turner, Christopher Paolini, Patrick Rothfuss. The moderator: Maryelizabeth Hart of the awesome Mysterious Galaxy bookstore. She was great. They were all great.

Hart’s first question was about the everyman character vs. the larger-than-life superheroic character. In epic fantasy, with these sweeping adventures and grand-scale worldbuilding, does the main character also need to be larger than life? END_OF_DOCUMENT_TOKEN_TO_BE_REPLACED

But it wasn’t really a commercial. It was two intelligent and enthusiastic writers talking about the process of researching, writing, and organizing a complex work of nonfiction. END_OF_DOCUMENT_TOKEN_TO_BE_REPLACED