I Never Did Tell You About Those Junkyard Dogs 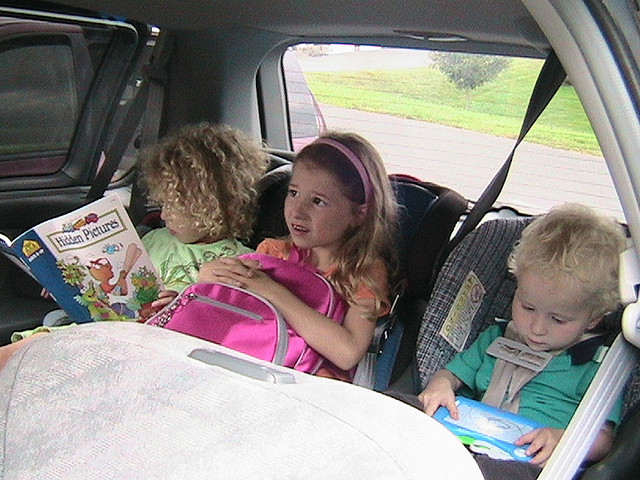 The thing about moving is that when you get there, you’re busy for weeks. It isn’t like a vacation, where you come home on Sunday, and you spend Monday doing eight loads of laundry and a massive grocery shopping, and then you’re pretty much caught up and can get down to the serious business of forcing all your friends to ooh and ah over your photos.

With a household move, you have So Much Work to do when you get there. Who has time for photo-sharing and storytelling? And yet, there are all those stories from the big adventure of Getting There, all those landmarks you passed and wanted to write about so you’ll remember them forever.

We’ve been here three weeks now. That seems hardly the blink of an eye, and yet in the eyes of the DMV I’m already in penalty territory for not having registered the car. I did try, yesterday. After two hours of waiting in line and wrestling with papers, I left with no car registration and a temporary driver’s license which has my name spelled wrong. Sigh. I’ll try again next week. Dear DMV, Thank you for providing my five children with an important life lesson. I call it, “Red Tape is Like a Spider’s Web and We Are Hapless Flies.” Signed, Merlissa.

Three weeks. We’re mostly unpacked, the girls are already immersed in ballet and piano, and I refer to the freeways the California way (“the 8, the 52”) without having to think about it. But part of my mind is still reliving our trip. I think I’m a little in shock that it went so well. I was braced for more misadventure in our adventure. Apart from a couple of rough moments when Wonderboy objected (loudly, stridently) to my going out to the car to bring in our bags—because these spaghetti arms can’t handle luggage and babies at the same time—everything went quite smoothly. No getting lost in strange cities, no serious injury, no breakdowns (neither vehicular nor mental), no moments of panic.

Except when those dogs were charging toward us.

It was somewhere in New Mexico, or were we already in Arizona? Already, I’m forgetting the details. I was on the phone with Scott (handsfree, of course, THANK YOU BLUETOOTH) who had an airline ticket agent on his other phone. It was the day the movers unloaded our furniture here, and they finished surprisingly early, and Scott and I were regretting having scheduled a cushion day into our plans. He was booked to fly to Phoenix on the Wednesday, planning to meet us there and bring us into California himself. But I was making great time, and the movers were gone, and both of us were wishing we’d booked his flight for Tuesday instead. Hence the two-phone conference call with the ticket agent, who said she could indeed move his flight up a day and it wouldn’t even cost anything.

“She says she can get me to Phoenix at either two p.m. or five p.m.,” he said. “Which one works best for you?”

“WHY ARE YOU SHRIEKING?” I shrieked.

“Two o’clock! Arrive at two I gotta go BYE!” I shouted. There was an exit just ahead, so I took it. It turned out to be one of those nothing-there exits, just a frontage road in the middle of lonely fields scattered with rusting cars and old tires. I pulled over to the side of the frontage road and released the girls from the foul-smelling van. Wonderboy was sobbing. Or maybe I was. Hard to tell in all the confusion. I cleaned him up—experience has taught me to keep the minivan well stocked with cleanup supplies—and was bagging his icky icky clothes when I noticed something moving toward us. Dogs. Four of them, no, five. A pack. I think five dogs pretty much qualifies as a pack, especially when they’re a motley assortment of shapes and sizes and they are glaring at you and your small children from not very far away.

Oh, look, that’s a junkyard, said my brain, which has a habit of chiming in with helpful information about five minutes too late. Also, that’s a very low fence. Those dogs could jump that fence in a heartbeat. Look, they are coming this way.

Thanks, Brain. I’d picked up on that already. Eyes beat you to it. And actually Adrenal Gland was way ahead of you both.

Those dogs do not look friendly, said Brain. I couldn’t help but notice that Brain was sounding decidedly panicky. And Heart seemed to have chosen this moment to stop beating.

Don’t just stand there you idiots! hollered Adrenaline. Get those kids in the car before those dogs—

Adrenal Gland delivered a firm kick in the pants to Nervous System. The impact jarred Vocal Cords loose from the stranglehold Heart had put on them.

Bless their beautiful little hearts, they obeyed without questioning me. Or rather, they were asking lots of questions but they were obeying as the words came flying. All three of them piled into the car as I shoved poor Wonderboy back into his seat.

“Mommy, is it those dogs? Are they coming to get us?”

“I don’t know, sweetie. Probably not. I just don’t want to take any chances—”

Brain and Muscles managed to coordinate efforts well enough to get me into my seat where Fingers, oh so eager to help, pushed the buttons that closed the van doors.

Did you see that, guys? We had the most important job. Little old us! Fingers! We saved you all!

Hush, scolded Ears. The children are saying something. Screaming it, actually. Hold on, I’ve almost got it…Ah. “The back door is open.” That’s it.

Of the van, put in Eyes, returning from a trip to the rear-view mirror. You know, the trunk.

We don’t have a button for that, said Fingers.

You know we’re going to have to get out and close that, said Common Sense, making a rare appearance. Everyone else stared at it blankly.

Who are you? asked Brain.

Don’t get distracted, scolded Common Sense. We must close that door. FAST.

Um, guys? Small problem, stammered Legs. We seem to be having a malfunction here.

MOVE IT, MAGGOTS! bellowed Adrenal Gland. GET! THAT! DOOR! CLOSED!

The dogs are at the fence now, chirped Eyes.

My BABIES! sobbed Maternal Instinct. But even as she wailed, she was joining forces with Adrenal Glands to yank Heart up out of Stomach where it had slunk away to hide, the sniveling coward. That seemed to jostle Nervous System out of its stupor, and in a flash Legs leapt out of the car and hurtled to the back of the van. Arms knew what to do. Fingers screeched in triumph at having been saviors once again. By the time Legs returned the rest of the gang to the driver’s seat, Brain was just finally catching up.

I think we should go now, it offered timidly.

They’ve reached the fence! reported Eyes. That was a close one.

Actually, remarked Common Sense, as Fingers turned the ignition key and steered the van back onto the road, I doubt they would have jumped the fence after all. We probably weren’t ever in any real danger at all.

OH SHUT UP, snarled everyone else.

Humph, sniffed Common Sense. I can see I’m not welcome here! Fine! It stalked off, sulking, and hasn’t been seen since. Which probably explains how I managed to show up at the DMV yesterday without having had the van smog-checked, which is why I was not permitted to register it. Stupid touchy Common Sense. Humph indeed.

So anyway, that’s what happened with the junkyard dogs. Heart and Stomach still go into convulsions whenever Brain hauls the memory out of storage. Fingers are happy, though, because they finally got to tell the story.

(We are the coolest, interject Fingers. We can interject that because WE CONTROL THE KEYBOARD bwah-ha-ha-ha! FINGERS ROCK!)