We woke early and ordered continental breakfasts from room service. Fresh-squeezed orange juice, ham, a sharp white cheese, very tasty. Croissants, powdered-sugar-covered pastries. Lots of dry toast, with butter and little pots of jam on the side. Red currant jam is my new favorite thing ever.

We ate, and I’m told I fell back asleep with the tray still on the foot of my bed. Jet lag is a killer. Scott had to be at the con at 11 a.m. for portfolio review and I remember swimming up out of a heavy slumber to say goodbye to him as he headed out the door, backpack over his shoulder. Then I was awake, and I got dressed, ate more jam and also some toast with jam, and took pictures of the view outside our hotel room. 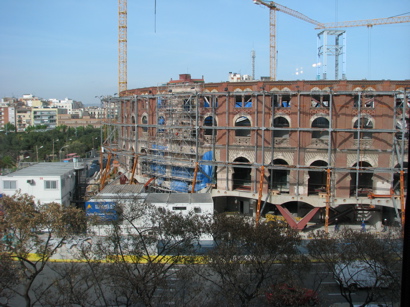 The old bullfighting arena. And cranes! 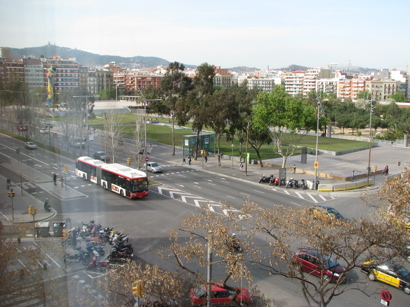 View to the left: Miró Park. Kindly excuse the glare. 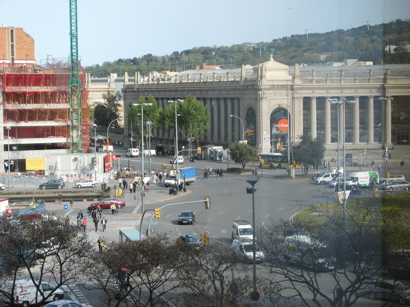 View to the right. You know this one already! The Placa Espanya. Again, forgive the glare and also my laziness in not looking up the fancy c-with-tail keystroke for Placa. 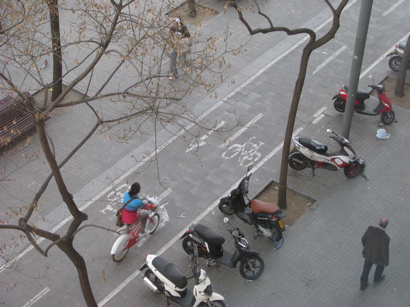 View straight down. Love that dedicated bike lane on the sidewalk! And note the red and white bike. It’s a rental, available at sidewalk racks all over the city. Our old hometown, Charlottesville, VA, was just instituting something similar when we left. It’s a genius idea.

Large chunks of the previous afternoon had passed in a blur of sleep deprivation, but somewhere in there Scott and I had discovered that internet access in the hotel cost a charming 17 euros a day, and we’d scouted out an internet cafe a block away that charged only half a euro for thirty minutes. They offered cheap phone service, too, and the hardest part of the day had been the five hours I spent waiting in the hotel lobby while Scott ran down the street to call home and check on kids and grandparents. Okay, so it was really only ten minutes. That was a loooong ten minutes, I am telling you. I think I nodded off several times. That was before our walk to Montjuic, which woke me back up a bit.

Anyway, when I was finally alert and presentable on Thursday morning (i.e. noon), I ventured out to the internet cafe and read several hilarious/heartwrenching emails from the kids. (Rose informed me that Wonderboy was sad, ouch, but that Rilla had hardly noticed I was gone: double ouch.) My mother gave a more thorough report, including the amusing tidbit that anytime she told Rilla she was going to change her diaper, Rilla would say, “No, Mommy did it.” Ha. Guess she remembered me a little.

When I came out of the internet cafe, rain was pouring down. Of course I had no umbrella. Do you think I plan ahead or something? I pulled my jacket over my head and dashed back to the hotel, where I learned that I could buy an umbrella at one of several shops around the corner the opposite direction from the internet cafe. I darted from overhang to awning and finally came upon Umbrella Heaven: a whole store devoted to them, a rainbow of umbrellas wide open on every wall and counter like something Andy Warhol might have painted if he’d been part Gene Kelly. I asked for the cheapest—and paid (gulp) a whopping 15 euros for what turned out to be the teeniest little pink umbrella this side of a Strawberry Shortcake cartoon. It covered my head but not my toes. No matter, my shoes were already soaked. It protected my camera, and that was the main thing.

I American-in-Parised my way across the rotary to the Fira de Barcelona, Palau Numero Ocho (and if you haven’t figured out by now that I am a tremendous dork, you’ll know it for sure by the end of this travelogue) and tried three different doors before I figured out how to enter the con. Yellow wristband granting entry, check. Pink umbrella under arm, check. Rained-upon hair now performing Hermione Granger impersonation, check.

The con looked like all the other comic cons I’ve seen, except in Spanish and with some quite shocking cardboard-figure art. Averting my eyes, I found the most beautiful booth in the whole convention hall. 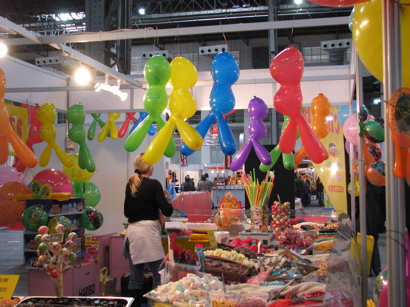 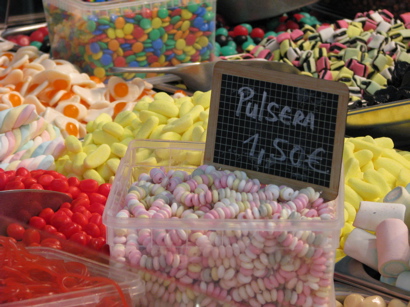 Because, yes, I am the kind of person who goes to a comic book convention and mainly takes pictures of candy.

I didn’t know where Scott’s table would be, so I asked the nearest superheroes. I must say that Clark Kent fellow is every bit as nice as he is reputed to be. Rorschach‘s a bit of a grump, though. Not that that’s news. 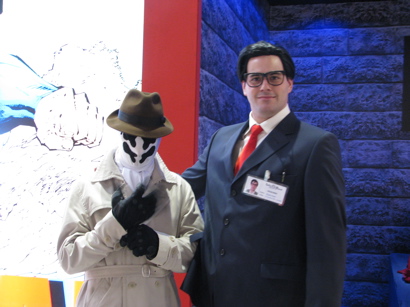 Unfortunately the Smallville high school doesn’t seem to have taught Spanish, so Clark’s direcciones didn’t help me a whole lot. 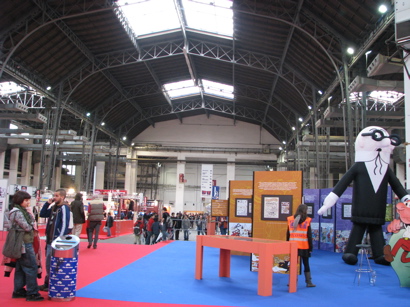 Despite his impressive spectacles and vantage point, the large gentleman on the right doesn’t know either.

Eventually I gave up trying to find him and headed back outside. The rain had stopped, and the avenue sparkled. I took a walk until it was time to return to the hotel for lunch. 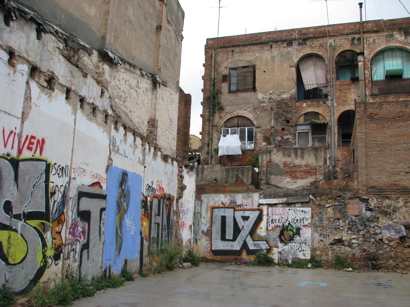 The backs of buildings are sometimes the most interesting part. 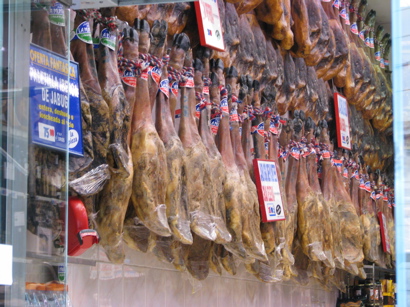 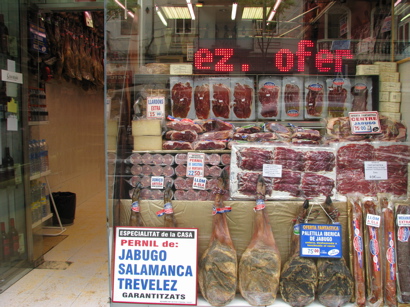 The butcher was a little suspicious of me and my camera at first, but I babbled about my niño y niñas and he warmed right up. Man I’m getting tired of looking up these fancy keystrokes.

Lunch was lots of fun that day. Scott and I sat across from Michael Golden and Tim Sale, another comics superstar. Scott had worked with him long ago and is used to hobnobbing with all these talented artists, but I’ve been out of the loop for a while. I tried not to geek out Tim too much but I am a huge Heroes fan and you know he does all the paintings for that show, plus he’s a total sweetheart. Next to me was Diana Livingstone Bruce, with her husband (that would be Mr. Ray Harryhausen) on her other side. That’s right, THE Ray Harryhausen, the pioneering film producer and stop-motion animation wizard who created the special effects for, among other classics, The Seventh Voyage of Sinbad, Jason and the Argonauts, and Clash of the Titans—which last my sisters and I watched approximately 712 times on HBO in the early 80s. That owl of Athena’s! The creepy three sisters with the one gnarly eye! Beautiful Andromeda whom I so, so, so wanted to look like except for her insanely long neck!

I gave up and geeked out.

Once again lunch lasted past 4pm, and after that I went to the art museum, and that rapturous experience should probably be its own post. Oh dear, I can see I really am going to make a novel out of this thing. I would apologize, but you come here voluntarily.