The busier we are, the more I have to write about and the less time I have to write. It’s been an especially busy couple of weeks. Our Shakespeare Club staged a splendid performance of scenes from A Midsummer Night’s Dream. I am so proud of those kids. Our plans to perform outdoors were thwarted by San Diego’s first rain in weeks, but our obliging hosts, the Grimms, converted their living room into a perfect stage. We had a great time and celebrated with Alice’s special Midsummer Night’s Tea menu, which the rest of you can get a look at very soon when her long-awaited book hits the shelves.

Other things that have happened in the past few weeks:

• I became the mother of a teenager (speaking of gems). Congratulations, Jane my love!

• Our ballet group had its spring recital. Jane was in three dances and did a beautiful job. They all did.

• The kids and I made a spur-of-the-moment visit to our favorite local nature preserve, Mission Trails. We’d been talking about the Kumeyaay Indians, and the visitor center there has several Kumeyaay artifcacts, including large flat stones with hollows ground into them by acorn- and grain-pounding pestles centuries ago.

This plant was our favorite sight of the day. It’s a member of the yucca family and goes by the colorful common names of Our Lord’s Candle or Spanish Bayonet. 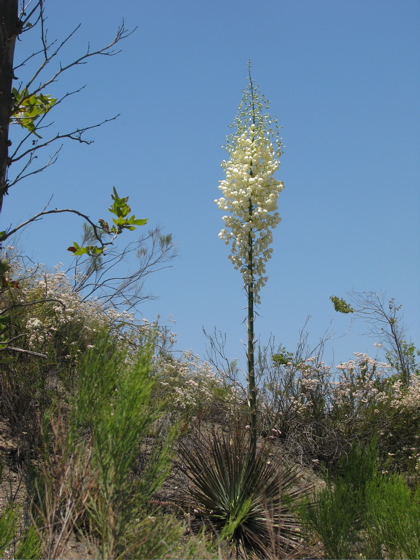 We also saw this guy. He’s much less alarming in his natural habitat than in, say, our laundry room. 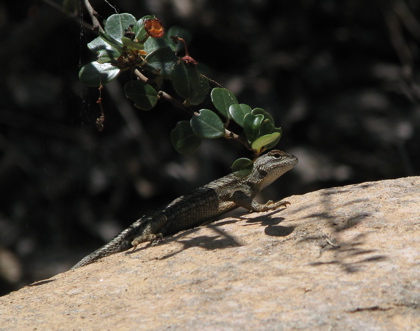 • We had an exciting new visitor to our backyard: our very first sighting of the Western Scrub Jay. No photos because Rose and I were too busy gawking. We had bluejays a-plenty at our feeders in Virginia, of course, but here we’ve been in California for a year and a half and we still hadn’t seen their western cousins! Hard to believe, but true. We’re still watching for a Steller’s Jay. Meanwhile, we enjoy the daily antics of our parliament of crows. Ever since I set up my nifty solar-powered birdbath fountain (awesome Mother’s Day present), the crows have been huge fans of Chez Peterson. They arrive with hunks of bread and perch on the edge of the birdbath, dunking their crusts and tearing off little bites of bread. It’s quite comical, and very messy. We have to clean gooey bread crumbs out of the filter every morning, but it’s worth it.

• The vines that took over our compost pile continue to sprawl across the yard. The blossoms look pumpkiny to me, which would make sense because I did dump our rotting jack-o-lantern in the pile last winter. But the fat green melon-thing that is growing on one of the vines looks decidedly watermelonish. Which is very confusing. I did toss some watermelon scraps out there, but the flowers are way too big for watermelon. All the pictures I’ve found of baby pumpkins look very different in color and shape. I suppose it could be a squash of some kind. Did we compost any squash scraps? Looks too fat for zucchini. We are perplexed.

• Some rodent chewed through the big plastic bin I keep my birdseed in. Whoops. There’s nothing left in there but empty sunflower husks. Poor birdies. Replacement bin and seed is on my list of errands for this week.

Oh, I’m sure there was more to tell, but I’m out of time. I’ll end with the obligatory dose of cute. 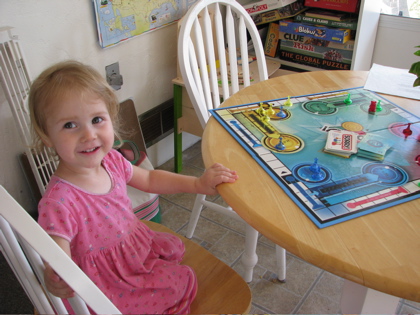