I just put a cherry cobbler in the oven—yes, I know it’s not even lunchtime here yet, but I’ve learned that if I don’t cook early in the day, I won’t cook at all—and I thought that in honor of Presidents Day, I’d reprise this old post which contains a very  nice cobbler recipe, if you can wade through all my nonsense to find it. 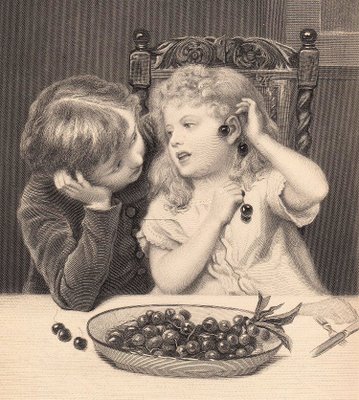 (Whyyy won’t WordPress center my images anymore? I keep telling it to center, and it blatantly ignores me.)

I have just polished off—with considerable help from children doing their finest ravenous-baby-bird impersonations—the remnants of the cherry cobbler I baked for teatime last week. We will pause here while people who know me well digest this news. Yes. I BAKED. From scratch. Well, the cherries were canned but I did actually have to crack an egg. And measure things. And—are you ready for this?—”cut in butter.” Oh sure, most of you out there probably cut butter into a flour mixture as easily as breathing, but SOME of us find these things a lot more complicated than, say, writing a novel. To be fair, I must disclose that Jane did most of the actual cutting-in. But I put the cobbler in the oven and took it out when it was done. Not burned. Not still gooey in places. Really truly perfectly done. Also, I whipped cream. (Gasps arise from my friends.)

Anyway, I have decided that cherry cobbler is the world’s most perfect food. (Well, right after dark-chocolate-and-marzipan bars. And my mom’s fried okra.) The cherries, not too tart, not too sweet, bursting with antioxidants, so the can assures me. The biscuity cobbler topping, only slightly sweet, with a lovely cake-like texture. And then of course the whipped cream, which, now that I think about it, really might be God’s most awesome invention. And so foolproof that even I can’t mess it up.

I have informed my children that we’re going to be eating lots and lots of cobbler from now on. They appear to be amenable to this plan. I will now share the recipe so you know what to serve for dessert next time you have me over.

Fruit Cobbler for the Incompetent Cook

Preheat oven to 400. Dump pie filling in an ungreased 8×8 baking dish and stick in oven to warm up while you mix the topping. (Cookbook will prattle on about how to make fruit filling from scratch, but you know your limits.)

In bowl, mix flour, sugar, baking powder, and if desired, cinnamon. Cut in butter until mixture resembles coarse crumbs. Do not panic if you have no idea what that means. Google can offer a ready explanation. Or ask your oldest child, who seems to have an innate knack for these things. Better yet, let her do it. You can still claim credit with your friends because after all, YOU made her.

In another bowl, combine egg and milk. Add to flour mixture, stirring just to moisten.

Take baking dish out of oven. Drop topping into mounds atop filling. Do not forget that the baking dish is HOT. When you do forget, drop spoon into filling and rush to sink to put burned hand under cold water. Allow oldest child to gingerly fish spoon out of filling and resume dropping mounds of topping into dish (which child will not forget is hot, because 1) you are yowling at sink and 2) she has more than half a brain). Assure younger children that your burn is not serious. Resolve to yowl under your breath next time, so as not to alarm small children.

Turn off cold water, dry burned hand, stifling scream when towel touches burned part, and resume impersonation of capable, domestically skilled mother. Start to pick up baking dish and thank children for alerting you with frantic shrieks that you are about to touch hot dish once again. Pick up potholders, which are lying on counter right next to hot baking dish and which were custom-made for you on a potholder loom in colors so bright it is surprising that you failed to notice them when you reached for the scalding-hot dish in the first place. USING POTHOLDERS, place dish in oven. Bake at 400 degrees for 20-25 minutes or until toothpick inserted in topping comes out clean. Possibly entrust this task to your oldest child, as you are sure to burn yourself again if you attempt it.

Serve warm with freshly made whipped cream, which (thank heavens) even you cannot mess up.

To celebrate, eat three servings. But save enough for tomorrow’s breakfast.

Image courtesy of The Graphics Fairy.