Drove to children’s hospital for Wonderboy’s appointment with our favorite specialist, the esteemed yet down-to-earth doctor of genetics. Only one of my boy’s many many physical anomalies seems to be genetic—the albinism—but Dr. J is also a dysmorphologist, which means she takes an interest any kind of birth defect or abnormality, whether its origins are chromosomal or developmental-in-utero. She’s the doctor who laughed at my possibly insulting analogy two years ago, when I said that dealing with specialists in so many different departments of the hospital was like trying to walk a bunch of dogs all pulling on their leashes in different directions.

“I’m sure it is,” she chuckled, earning my affection forevermore.

So I was looking forward to this appointment, even if it did cost Scott a day of vacation: he took the day off to ferry other children to other activities while I took the boys to see Wonderful Dr. J.

I arrived a tad bit early and found a good parking space in the garage down the street from the hospital. Our children’s hospital is a large complex with many buildings and it can be quite confusing to navigate, but I’d double-checked on the website this morning to make sure the Genetics Clinic was still where it had been last year.

So into the clinic area we went, where the line was already beginning to snake, although it wasn’t yet 9 in the morning. And when we got to the front of the line, the nice check-in lady said, “Oh, I’m sorry, but the genetics clinic has moved.”

To a building approximately 714 blocks away. Or six, at least.

“You could walk,” she said doubtfully, “but you’ll probably want to move your car to the lot on Frost Street. It’s a pretty long walk.”

Since “moving the car” would have involved the whole lengthy process of unbuckling boy and baby from the double stroller and rebuckling them into carseats, I opted for the long walk.

Except it needed to be a long jog or else I’d be really late for the appointment.

I saw a shuttle bus and showed the driver my map, helpfully marked in green highlighter by the apologetic check-in lady, but he too was apologetic. “Sorry, we don’t go near that building.”

Which was a rather emphatic demurral, don’t you think? We don’t go near it? How far away could it be, if the shuttle bus  doesn’t go near it? Or is it perhaps radioactive? Should I don a hazmat suit before approaching the site?

At any rate, it was clear my options had dwindled to: jog. I lasted about two blocks before my jog muscle cried uncle. And here I thought I was getting into shape with all the exercise-bike-riding I’ve been doing at the gym since we joined the Y. I guess the difference is the exercise bike doesn’t involve pushing a stroller containing a scrawny five-year-old and a nine-month-old the size of a side of beef. 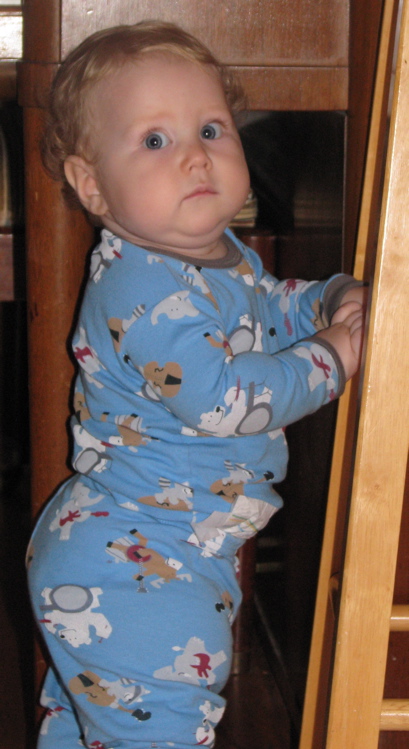 (You could hide pennies under those chins.)

So I walked and pushed and jogged and pushed, and there was a hill with a great deal more on the going-up side than the rolling-down side, and finally I saw a sign for the building that holds the fancy new clinic, and with much huffing and puffing, I delivered Wonderboy and his brother, the exceptionally cute side of beef, to the reception area.

The check-in lady at this clinic was embarrassed about the wrong directions on the website. I’m not the first parent to have been misdirected, it seems. “We keep calling them about it…” We—the embarrassed check-in lady and I—agreed that They (whoever they are) should have to make the walk themselves, once for every time a family arrives late and sweaty as a result of having put their trust in the website directions.

And eventually we got to have our appointment with Wonderful Dr. J. Who is, like every other doctor we’ve seen in buildings all over that sprawling medical complex and elsewhere, utterly baffled by our most pressing and persistent Wonderboy-related question, which has to do with his being the opposite of a side of beef (despite a hearty appetite). He’s been tested for everything the docs can think of, from cystic fibrosis to allergies to celiac disease to pancreatic something-or-other. But that’s a saga for another day. The topic of today’s anecdote is not My Child Is a Medical Mystery; it’s I Had to Take a Long Walk with My Two Adorable Sons in the Beautiful San Diego Weather, Poor Poor Me.

And the sequel, They Wouldn’t Validate My Parking in the New Clinic, So I Had to Go All the Way Back to the Old Clinic to Get My Ticket Stamped, O Woe.

What, you aren’t reduced to tears of overwhelming pity by this tale? Hmph. Um, um, well, I also had a dentist appointment in the afternoon. There. Now I’ve got you.

Oh, fine. It was actually quite a nice day. Okay? Are you satisfied? The girls got extra daddy time, and (for some) a trip to Jiffy Lube where there was an arcade machine containing all the best games of the 80s. The Jiffy Lube Man said kids played free and gave them a stack of quarters. And Scott bought them donuts. Two days after Halloween, with the candy still flowing freely: this was a very good day for my daughters. Jane wasn’t part of the video/donuts funstravaganza, but her science lab is moving into a chemistry unit and she came home radiant with excitement. Chemistry is Jane’s thiiiiing, to quote Little Bill’s father.

(We quote members of Little Bill’s family quite a lot around here. Especially Alice the Great. That Alice the Great is one of the best characters on television. Wise, twinkling, mellow, kind, observant, gentle, shrewd. And comfortable in her pink sweater and sneakers. I love her. This is going to sound ridiculous, but I have actually thought more than once, Gosh, she’s getting old. I hope she doesn’t die. And then I remember she’s a cartoon.)

Later in the day there was a long stretch of singing folk songs on the couch with the four youngest children, Bonny Doon and Loch Lomond and all my Scottish favorites, and also Down in the Valley which I still remember my grandma singing in her kitchen with two skillets sizzling on the stove and a spatula in her hand, and the smell of fried chicken livers filling the room, best smell in the world, and a plate of fried okra steaming on the counter, grease soaking into a paper towel, hear the wind blow, dear, hear the wind blow.

Our little singalong was underscored by a fair amount of kid-squabbling, the usual “I wanna sit next to Mom” scuffles, but that’s just the percussion section of life, keeping the tempo lively. I just sing “You take the high road” a little more loudly, arching an eyebrow at the oldest child in the squabble. This is probably not nearly as amusing to the intended recipient of my wit as it is to me.

Much like this post. What can I say? Writing long, nonsensical posts for my own amusement is my thiiiing.