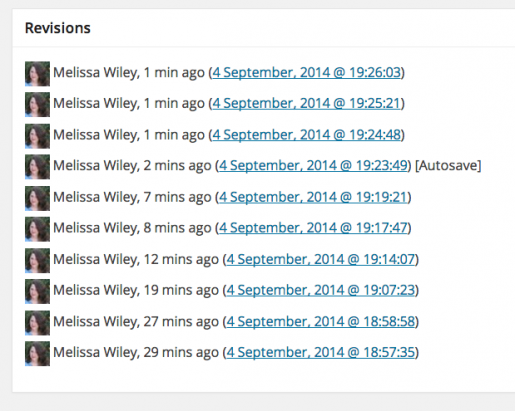 This is pretty typical for one of my posts. Somewhere in the middle there is when I hit publish, so a number of those edits happened after the post went live. Which means the version that got sent to feed readers and email subscribers wasn’t the final. My ‘blogging freehand’ post went out the other day with a really mortifying apostrophe typo in it. Jane caught it for me, but not until it had been up for hours. One of the hazards of instant publication. But that’s something I love about blogging: you can put a thought out there and tweak it later if need be. I figure it’s sort of like having the kind of house friends can drop by anytime, even if that means sometimes they catch you with crumbs on the floor. I want my blog to be reasonably tidy and presentable but not all scrubbed-up for fancy company, if you know what I mean.

In grad school, my beloved teacher, Fred Chappell, used to say, “How do you know when a poem is finished? When it’s published.” He meant that it’s never really finished for the poet; we’ll go on nipping and prodding at it until some editor takes it out of our hands and says, Enough. Blogging is the same way, for me. A post is never truly finished; it’s part of a conversation.

Jumping to a new topic. Things we read about this week: the French Revolution; Richard II; China’s Emperor Chien-lung and the press of English trade, especially opium; the friendship of Wordsworth and Coleridge; Napoleon; the founding of Rome and the abduction of the Sabine women. A bit wide-ranging but all relevant to ongoing conversations or studies. A rich week.

Something that made me laugh. On Sunday morning I had planned to get outside early and do some gardening before the heat fell, but I got caught up writing a post, a long one, about September in San Diego and how every year it bucks my internal sense of what September ought to be. Eight years we’ve been here, but certain things about the seasons still jar me. Not in a bad way—I like being jarred, being made to notice. Anyway, this post has been sitting in drafts all week: it wants pictures, and I never got around to taking any. Then today one of the ‘related links’ at the bottom of my current post caught my eye: San Diego Autumn. Hello! I thought. Guess I’ve ambled this bit of ground before. Was fun to compare the then (2008, two years after the move) to the now. I may still try to get the new one finished up and posted, but I think the original probably captures my meaning better. And that picture of wee Rilla at the bottom—oh my. She’s all grasshopper legs now.