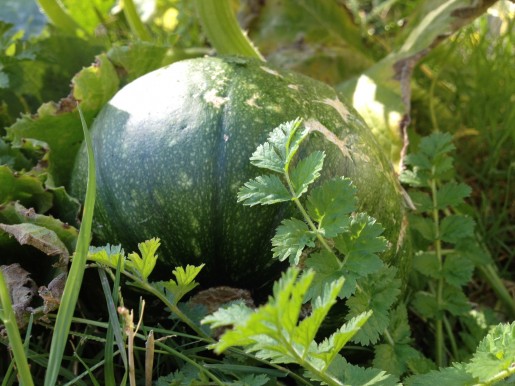 Faded: the sunflowers. They’re drooping in sad-Charlie-Brown fashion all along the side wall. They amuse me.

In bloom: yellow daisies, masses of them. Pink geraniums, always. Orange zinnias, still going strong. Sweet alyssum and snapdragons, recently added. (The summer alyssum crop, grown from seed, carpeted a corner of the yard all summer, then went brown and weedy. We missed them and put in a few nursery plants to tide us over until the next batch of seeds comes up.) Bougainvillea, small but promising. Lavender, keeping the bees busy. Basil, because I forgot to pinch it off.

In fruit: Tomatoes! Hurrah! I moved them to the front yard this year and voila, they are producing abundantly.

But overshadowing all of these by a mile: the renegade pumpkins. Last year (Halloween 2013) we had one jack-o-lantern and two smaller uncarved pumpkins. These got left alone when we tossed the melting jack-o-lantern. (That’s what carved pumpkins do in Southern California. They dissolve on the stoop.)

The two little pumpkins became a quiet science experiment during the course of the year. One was partly under a bush and retained its integrity for months. The other, in full sun, decomposed rapidly. All of us enjoyed comparing their progress during our comings and goings from driveway to front door.

By July, the shaded pumpkin had joined its mate in the circle of life: its skin crisped and cracked like old, brittle paper. Seeds spilled out everywhere. Did I pay them any mind? I did not.

In August, we noticed sprouts. Not only at the site of the departed pumpkins, but also along the side wall near the sidewalk. 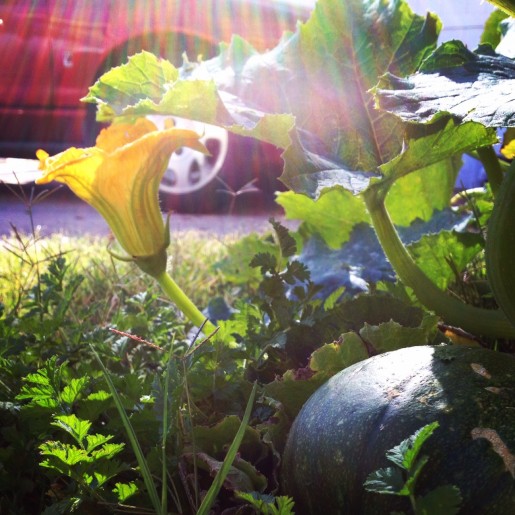 By October, we had vines. Big sprawling vines with huge leaves, trailing all across the lawn and beyond. We had to keep kicking them off the sidewalk back onto the grass lest they trip up passersby.

And now, two days before the final pumpkin holiday of the year, we have (at last count) a crop of six young pumpkins of modest size in various shades of green and yellow. Not orange. No, not quite orange yet. 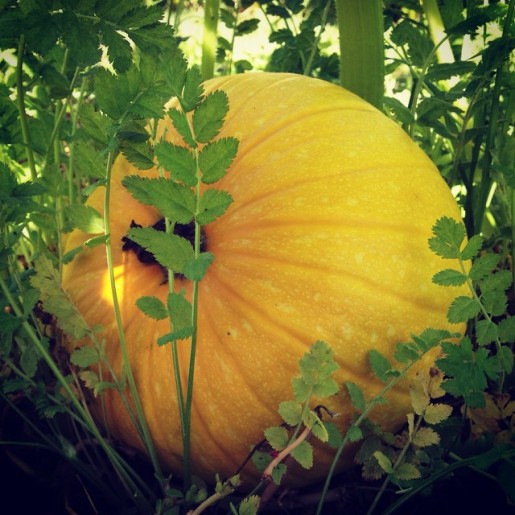 I figure they’ll be ripe in time for Christmas.