…she says, half a week into August. 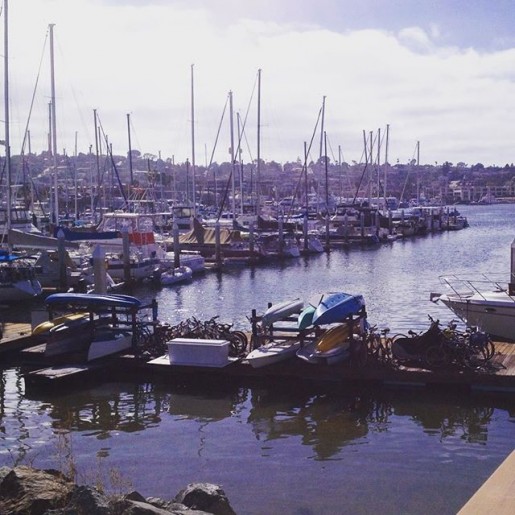 We had family in town and spent a day hanging out with them at their fabulous beach hotel, and another afternoon touring the harbor on a boat cruise. Glorious weather. At one point, we were approaching Point Loma for a glimpse of the lighthouse when my nephew’s phone buzzed—it was Verizon Wireless texting him a “Welcome to Mexico” message. That was just about as far as we got before turning around to cruise past the downtown area. We saw dolphins and sea lions and pelicans—a perfectly satisfying day, according to Miss Rilla, who spent much of the boat ride standing in the wind with her arms spread wide and her grin even wider.

One of the nicest things about living in San Diego is that so many friends wind up vacationing here, and we get to join in.

Back home, I’ve been in blissful planning mode. I adore low tide; low tide is a deep delight; but my little listmaking heart glories in the voyage-charting of high tide just as thoroughly. I spent a morning gathering books from all over the house to fill a shelf for Huck—treasures I want to be sure my last six-year-old (sniff) doesn’t miss. I’ll try to get a picture and a post up soon, because I know some of you enjoy comparing notes that way.

Plans are afoot for Rilla and my two high-school-age girls too: more booklists, more shelves filling up. Every August I do this massive rearranging of the tomes, shifting high-tide resources to the living room where we do indeed do the bulk of our living. Twentieth-century history for the teens this year, and earth science, and Shakespeare of course, and a fat list of literary texts, and the languages they are studying separately. All juicy stuff. Beanie is forging ahead with German, which is extra fun for me, since I’m fair-to-middling in that language myself and always longing to improve my skills.

And loads and loads of art—along with poetry, perhaps our most constant occupation these days. At Comic-Con, I tried out my (brilliantly talented) friend Zander‘s pocket brush pen and was thoroughly intimidated by it. The next day, our (also staggeringly talented) friend Mark Chiarello showed us art from his forthcoming book (his first since his gorgeous book on the Negro Leagues), and he too was working with this pen, whose merits the extraordinary Roz Stendahl is always talking about. Between them, they convinced me to give it a try, and ohhhh, it turns out I’m in love. It is loosening up my line so much. I have a tendency toward a very careful and nervous line, and I’m feeling much freer about taking chances and using my whole arm, thanks to a few weeks with this pen. My book is filling up with a lot of messy, not-so-lovely pages, but in a good way. And every now and then I draw a line I really like. That’s progress.

Meanwhile, Rilla and I are about to dive into Sketchbook Skool’s “More Playing” klass, which started yesterday. We had a ball with “Playing” in July. Our favorite project was the drawing where we took turns for thirty seconds at a time, filling a page with nonsense. Much hilarity there. This, too, is something I’d like to post more about in the week ahead.

I’m overdue for a books post, too. Got on an Anne Shirley kick in July, following my Betsy-Tacy kick in June. Read the series through House of Dreams (skipped Windy Poplars, because I don’t have it on Kindle). I swear Dreams is better every time, even a dozen or more times later.

I also revisited Pudd’nhead Wilson for the first time since high school—shaking my head in bed at Twain’s audacity the whole way through. Oh, how I love him. I’m deep into Mansfield Park right now. No particular reason; it just decided I needed to reread it. I’m a Persuasion person first and foremost, and then P&P, but I do enjoy Mansfield. The urge to smack Mary Crawford upside the head is such a satisfying sensation.

Well, that’s the news from these parts. What’s your August looking like? 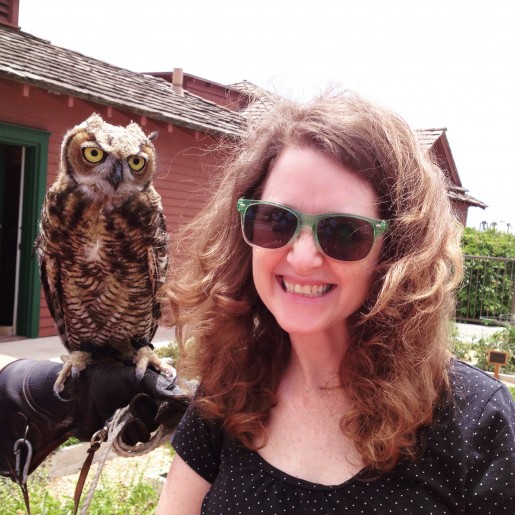