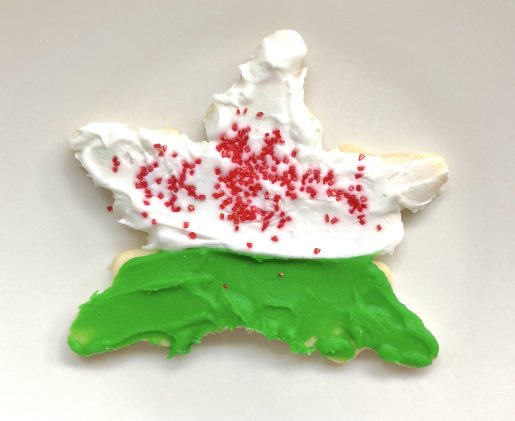 A Welsh-flag-inspired cookie, courtesy of Rose. It was delicious.

Yesterday I mentioned how impressed I am with the Say Something In language courses. In my (yikes) decades of homeschooling, I’ve tried just about every language-learning program on the market at some point or another. A lot of them are good! Some are great, even. But nothing has ever made a new language click for me so rapidly the way SSi Welsh has.

Okay, I said for me. None of my kids have used it—yet. Huck is learning Spanish on Duolingo, and that’s one of a small handful of languages the SSi program offers. I, too, would like to move my Spanish past the tiny smattering of phrases I currently know, so my plan is to see if Huck is interested in working through Say Something in Spanish with me next year. But not yet! I want to complete the Welsh course first.

So much to say. First: why Welsh? The pat answer is that I enjoy trying small doses of new languages on Duolingo, and in the very first Welsh lesson, they teach you to say, “Good morning, dragon.” Needless to say, that had me at hello. But there’s a deeper answer—only it took a while for me to register it.

One of my earliest school memories is my kindergarten teacher, Mrs. Vinson, teaching our class the vowels: A, E, I, O, U, and sometimes Y—and sometimes W.

When I moved to a new school a year or two later, that lesson ran me into trouble. My new teacher was baffled by my inclusion of W in the list. I insisted, because Mrs. Vinson had said so! Mrs. Wiseman begged to differ, somewhat exasperatedly.

Several years later, I learned that W is a vowel in Welsh. With this knowledge, the puzzle shifted: why had a teacher in a tiny private school in south Georgia taught her kindergarteners a Welsh vowel? It must have been some kind of whimsical impulse, or maybe she (like me, actually) had Welsh ancestry—who knows?

Fast forward to the present. I’d been glued to my Duolingo Welsh and SSiW lessons for a couple of months before the Mrs. Vinson connection occurred to me. Actually, it was Scott who pinpointed the link. It’s lovely having someone who knows all your stories.

Well, here I am 114 days later, as captivated as I was the first time Duolingo nudged me to say Bore da, draig! Menyw dw i. It seems W-as-vowel has been waiting for me this whole time.

A few weeks into the Duolingo course, I had lots of questions about the grammar. Duolingo is great for helping you absorb a ton of vocabulary pretty quickly, but it seldom explains why things fit together the way they do. Some googling led me to Say Something In. It’s a really different kind of program—an emphasis on learning to hear and speak the language rather than to read it. (Which works especially well for Welsh, because Colloquial Welsh and Literary Welsh are quite different. Both Duolingo and SSiWelsh teach the former—the standardized written and spoken form of the language sometimes called Modern Standard Welsh.)

SSi’s learn-by-speaking approach is Pimsleurish, I suppose? But better, in my view (here I’m comparing Pimsleur German from years ago to SSi Welsh now). The lessons are all audio, and quite challenging, in a really exciting, lively way. I absolutely love it. It has become my primary means of learning, with Duolingo now serving as a daily supplement. I do like to see the words, so that’s what I like Duolingo for; I’m a visual learner and it really helps me remember a word if I know how to spell it. If I bump into a seeming discrepancy between the two programs, I reach for Gareth King’s Modern Welsh and he helps me understand what’s going on.

The Say Something In courses can be worked through at your own pace, but you have the option of a weekly rhythm with encouraging emails heralding each new lesson. There’s an enthusiastic community who hold lots of live conversation-practice sessions. I haven’t attended one of those yet, but I do plan to. I’m keeping up pretty well with the weekly lesson pace; each audio lesson is around half an hour, and you can do it all at once or in smaller chunks.

It’s sort of a playing-with-Legos approach to language (i.e. a very natural immersion approach), where you learn a few words and start building quite complex sentences with them right away. By the end of Lesson 1 I could state quite honestly: Dw i’n mynd i drio dysgu siarad Cymraeg—I’m going to try to learn to speak Welsh. Last night the lesson had me talking about how the old woman had better try to understand the young man, if she can remember how to say what she wants to say. And believe me, I had a little bit of trouble remembering how to say all of that—but I did it!

Besides Spanish, Dutch, and Welsh (with, by the way, options for lesssons in the dialects of North or South Wales), Say Something In offers Cornish and Manx. Manx! The historical language of the Isle of Mann. A Celtic language whose last native speaker died in 1974.

Which, come to think of it, would have been right around the time Mrs. Vinson was teaching me my vowels.

Tags: Duolingo, Say Something In, Welsh