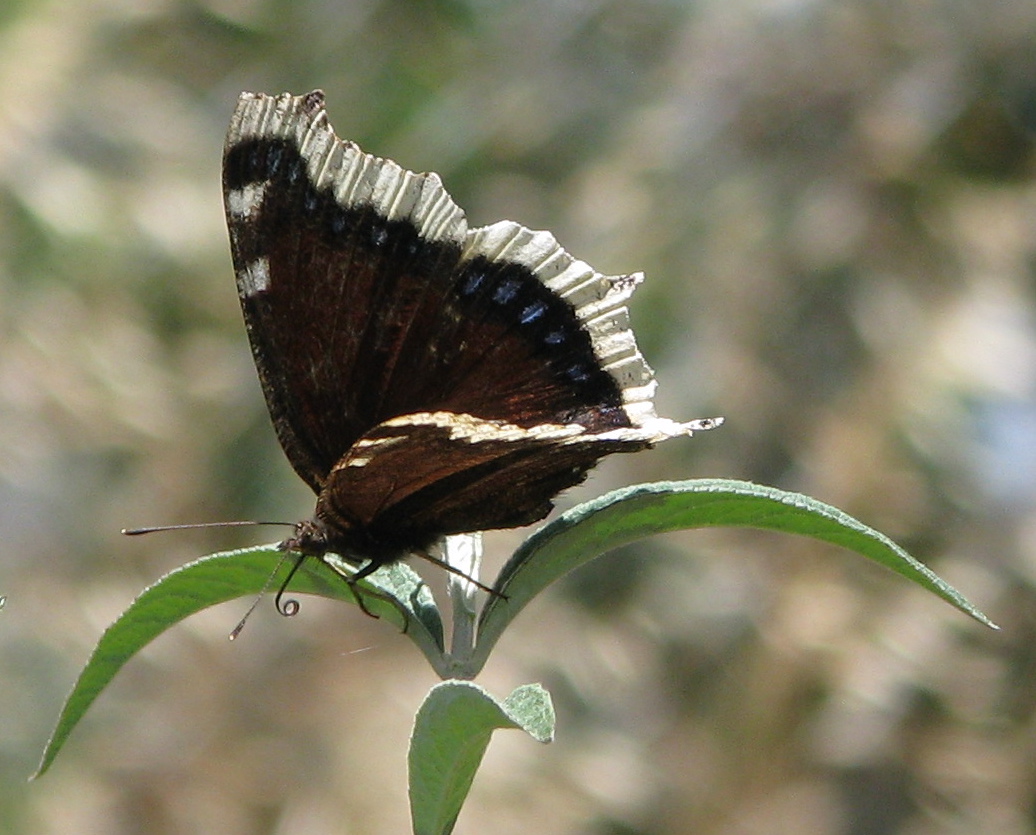 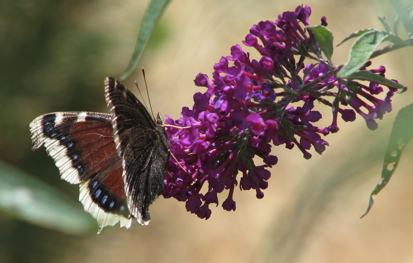 Another tidbit from The Dangerous World of Butterflies:

[Elliot Malkin of Brooklyn, NY] worries that migrating Monarch butterflies, in search of their plant food milkweed, will find a dearth of the needed vegetation in the urban reaches of New York City. Intent to do what he can to help, he placed potted milkweed plants on the balcony of his apartment. Concerned that it might be difficult for the butterflies to locate his few plants in the asphalt jungle, two ideas came to him: paint giant pictures of milkweed adjacent to the real plants to alert the flying Monarchs, and then paint them with sunblock.

“Milkweed flowers,” says Malkin, “have natural ultraviolet patterns that are recognizable to Monarch butterflies. These patterns are invisible to us because we can’t see light in the ultraviolet spectrum. So Graffiti for Butterflies uses sunblock to pain the graffiti in a way that mimics these natural ultraviolet properties.” Sunblock is a perfect medium, he says, because it reflects ultraviolet light. Malkin considers his work “the equivalent of a fast-food sign on a highway, advertising rest stops to Monarchs.”

Malkin can’t say conclusively whether his sunblocked paintings are responsible for attracting the butterflies to his rooftop garden, but they are indeed visiting his milkweed plants. Here’s Malkin’s website.

In other news, our milkweed is blooming. 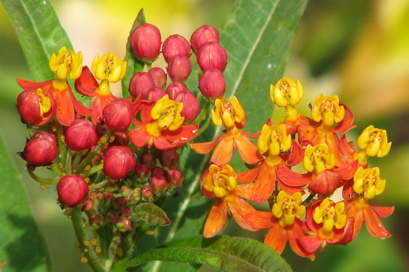 Booknotes: The Dangerous World of Butterflies

The Dangerous World of Butterflies: The Startling Subculture of Criminals, Collectors, and Conservationists by Peter Laufer. Lyons Press, 2009.

We heard about it from our friend Sarah (this Sarah), who correctly supposed it might be interesting to Jane and me. Jane read it first and loved it. Of course, her fascination with butterflies goes way back. I’m about a third of the way through the book and had to stop and jot down some notes. It’s that kind of read. (My favorite kind.)

Peter Laufer is a journalist and the author of several books about serious, even grim topics: Americans in overseas prisons, immigration, the Iraq War. During a Q-and-A period following the publication of his book on the latter, someone asked him what topic he was going to tackle next. Joking, Laufer suggested he might take a break with something less weighty: “butterflies and flowers,” perhaps.

An American ex-pat in Nicaragua saw the exchange on CSPAN and emailed Laufer an invitation to visit her butterfly reserve; she thought it might be a peaceful respite for him. And thus it came about that Laufer’s lighthearted remark became reality: he became interested in butterflies and the lively subcultures they have inspired—the collectors, the breeders, the “butterfly huggers,” even butterfly smugglers.

Heading down the mountain [after a butterfly-spotting hike] I realize I’ve gone native to a certain extent. It was exactly what Glassberg suggested it would be: a Zen-like moment in the now. Nothing else was going on for me while I was searching for the Golden Hairstreak and spotting the California Sister. There was something pure about not chasing them with a net, just searching and observing. It reminded me of the license plate game my sister and I played while driving with my family across America. Look! There’s one from North Dakota! Rare is valuable, but not vital. If you’re in North Dakota, there’s another and another. But the sightings still can amuse those of us lucky enough to be in touch with the childlike parts of our minds.

The excitement was real. It was impossible not to be seduced by the focus of the moment, the pristine beauty of the rushing Cedar Creek with its towering pines and the burly oaks. The satisfaction of seeing the fluttering rare Golden Hairstreak and the glamorous common California Sister was real. I was an observer in this odd subculture but at the same time an active player delighting in the moment, not just observing as a news reporter.

The erratic-looking flight of the common Cabbage White butterfly can be attributed in part to buffeting from the wind. However, Professor Dudley [of Berkeley] says when researchers fly Cabbage Whites in still air, the erratic patterns do not disappear and are used for defense. “If you swing a net at them and miss, they’ll start doing it faster. That’s an intriguing feature that distinguishes butterflies essentially from all other flying insects, the high degree of erratic, seemingly unpredictable flight.”

That lack of predictable pattern adds to their aesthetic appeal to us, he and I agree, and inspired Robert Graves when he wrote his ode to the Cabbage White, the poem “Flying Crooked…”

The butterfly, a cabbage-white,
(His honest idiocy of flight)
Will never now, it is too late,
Master the art of flying straight,
Yet has—who knows so well as I?—
A just sense of how not to fly:
He lurches here and here by guess
And God and hope and hopelessness.
Even the acrobatic swift
Has not his flying-crooked gift.

Here’s something I did not know:

Inside the hard chrysalis the transformation is in progress. “All of their body parts, every cell, liquefies.” It is, as [biologist Rachel Diaz-Bastin] said before, science fiction. “This is weird stuff. All of their cells differentiate and begin forming the adult butterfly. It’s basically this big butterfly soup inside.”

Only LIQUID, seriously? Who knew! I think I’d always supposed it was more of a tadpole-to-frog gradual transformation.

Butterflies, or: the benefits of strewing
“A little egg lay on a leaf”
Our backyard gave us a going-away present
The tragic tale of Homer the Caterpillar, parts one and two

“A Little Egg Lay on a Leaf”

How many times have you read The Very Hungry Caterpillar aloud?

It’s got to be in the hundreds for me. Seems like every single one of my kids has had a time when that book was the favorite above all others.

But in all these years, I’ve never actually seen a real caterpillar egg—until now. 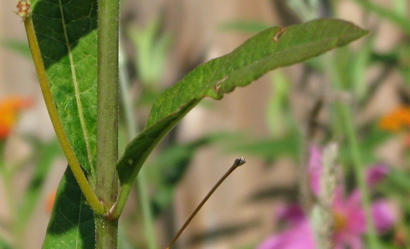 Can you see it? The little white dot on the underside of the leaf, quite near the stem. I watched the butterfly lay this egg and immediately afterward I ran inside for the camera, so this photo was taken no more than two minutes into the egg’s existence.

I hope the other caterpillars don’t eat that leaf. They are munching away and growing quite fat. We’ve counted up to eleven at one time but it’s likely we’re missing a good many. Counting callerpidders has become Rilla’s favorite thing to do. Mine too! 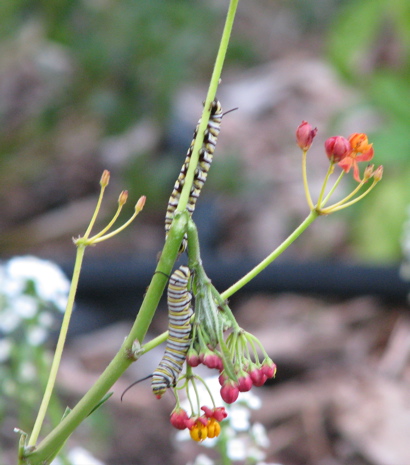 As for our blue flower…Jenn, I was sure it was a cornflower too, but the rest of them are coming up— 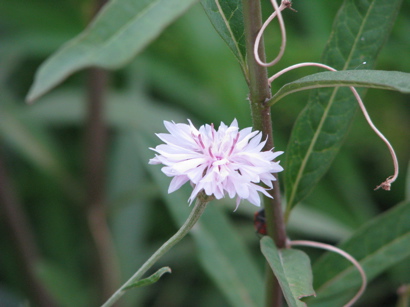 (The color’s a bit washed out in this photo. The flower is really a soft shade of pale pink. Hmm….)

There’s a monarch on our milkweed.

There’s a monarch on our milkweed!

You know how happy that makes me, right?

Here she is (not on the milkweed): 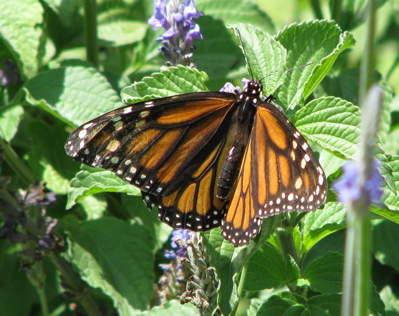 In Which Sarah Takes My Breath Away

A year ago today we left Virginia. That morning, I woke up early and wrote a post about the going-away present our backyard had given us.

Yesterday, the friends we left behind gave us that present all over again.

Oh, Blue Ridge friends and butterflies! How we miss you!

Our Backyard Gave Us a Going-Away Present

It’s a good thing I don’t have much time to write today, because I would no doubt get all weepy on you. Today is loading day. The truck will be here in a few hours. But I had to tell you. It wasn’t long after we moved here that I discovered Jane’s undying passion for butterflies. The two of us conspired to create a butterfly garden on our little slope at the edge of the yard. We planted butterfly bushes, asters, bee balm, coneflowers, turtlehead, fennel, cardinal flower, and a whole bunch of other plants, including—and most important— milkweed.

Milkweed is the only host plant for monarch butterflies, the only plant monarch caterpillars will eat. A monarch butterfly might stop to sip at your flowers but unless you have milkweed, she’ll never lay her eggs in your yard. And since monarchs migrate to and from Mexico each year, they need lots of milkweed along the route for each successive generation of travelers. But as more and more housing developments (like ours) are built, there is less milkweed growing wild in meadows. And hardly anyone plants milkweed on purpose.

For four summers now, we have watched for monarchs. Jane has inspected our milkweed for caterpillar eggs or big fat green caterpillars, but we never found any. Now and then we’d see a monarch (or was it a viceroy?) flutter past, but there was no indication that our little garden was serving as a stopping point on the great Journey North. Or South, for that matter.

Until—oh, it was breathtaking. A few days ago I walked out onto back deck and looked down the hill at my little trees grown so tall, and the street beyond, and the meadow beyond that, and beyond the meadow, the Blue Ridge: the gorgeous vista that sold me on this house. And just in the nick of time before the tears welled up, I saw something. Around the enormous clump of asters, a fluttering, a flash of orange. Many flashes.

I walked down for a closer look. Oh! How can I tell you how my heart leapt at the sight! Dozens of monarchs, more than I could count, lighting on the asters beside the bees.

There must have been eggs on this year’s milkweed, there must have been caterpillars, but we were packing and we missed them. But we saw our monarchs, a whole flock of them—I can’t say "a rabble," which is the proper collective noun; I prefer the Deputy Headmistress’s coinage: a fluttering of butterflies. And oh that’s what it was. The purple flowers, the orange wings, the green jungle of neglected but dearly loved garden: my heart fills up all over again to write it.

Of course I called the girls, and of course Jane (and everyone else) was over the moon with excitement. We tried to get pictures but I never got more than five or six in the shot at once and later that day a storm blew in, and afterward the great fluttering was gone. Perhaps they have journeyed on south.

But all the rest of this week we’ve seen monarchs, not in a flock (a fluttering, a rustle, a blessing!) but singly, flashing through the air past us, and we’ve known—how deeply gratifying to know this—that we did it, we brought the monarchs to our neighborhood, and they will be here after we are gone.

Which is to say, tomorrow. I Hate to Have to Tell You This

Herodotus is no more.

This hasn’t been our year for butterflies.

And there are no signs of life from the caterpillar-husk we thought The Monster was pupating inside, nor any other indication that the ravenous worm-thing exists in any form.