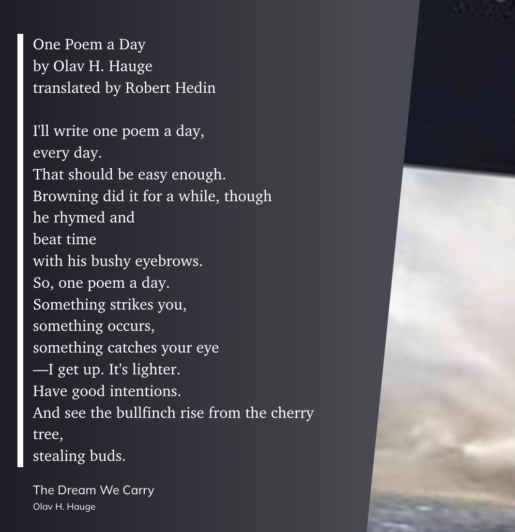 This is the poem that carried me through this year, more than any other. “One Poem a Day” by Olav Hauge, from his lovely book The Dream We Carry. Those last lines especially—

I get up. It’s lighter.
Have good intentions.
And see the bullfinch rise from the cherry tree,
stealing buds.

There have been so many days during the pandemic (and before) when I’ve walked around thinking: Have good intentions. Look for the bullfinch, the buds.

In her wonderful book Keep It Moving: Lessons for the Rest of Your Life, Twyla Tharp urges us to “make sharing delight into a daily occurrence,” or, as she puts it a few pages later, to find “the Daily Miracle. Find something that pleases you greatly first thing every morning when your mind is fresh.”

Every day
I see or hear
something
that more or less

kills me
with delight,
that leaves me
like a needle

in the haystack
of light.

(From “Mindful” in Why I Wake Early)

What, for you, is the bullfinch rising from the cherry tree, stealing buds, today? Your ‘daily miracle’ for this last day of November? What little thing, ordinary or extraordinary, has more or less killed you with delight?