A feisty girl from a family of ranchers lands a job as a daredevil stunt girl in the early days of silent film in this adventurous and funny cross between Wild Hearts Can’t Be Broken and Ramona. 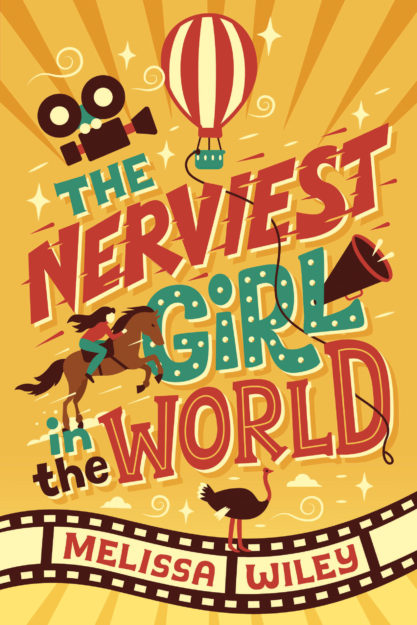 “Pearl, 11, lives on a cattle and ostrich ranch outside San Diego, where she helps to tend temperamental ostriches, learned to ride horses early on, and rivaled her older brothers on horseback by the time she was nine. The brothers’ advanced riding skills get them recruited to play “Death-Defying Cowboys” in the new moving pictures. When Pearl visits the set and her horse spooks, her ability to remount the galloping animal earns her a part in the director’s next film. Pearl learns to act on the job (“Can you show me scared instead of stomachache-y?”) and begins her career doing parts that require stunts, such as jumping out of a window and even shinnying down a rope out of a hot air balloon. Along the way, she discovers a passion for acting and navigates relationships with her difficult brother, as well as Mary, a town girl jealous of Pearl’s film roles. Lively illustrations by Deas mirror the heart, humor, and bravery of Pearl herself. Set in the early 20th century and inspired by real-life silent-film star Pearl White, Wiley’s (The Prairie Thief) vivid snapshot of cinema’s early days, as well as Pearl’s life on the ranch, offers warmth and wit.”

“Set in early 20th-century San ­Diego, Pearl lives on a cattle and ostrich ranch. One day her brothers’ advanced horseback riding skills get them recruited to be “Death-Defying Cowboys” in a director’s moving pictures. While visiting the set, Pearl’s horse gets frightened, and her unique way of remounting her horse gets her noticed. Soon, she too becomes an actress. From jumping out of windows to sliding down ropes, she discovers a love for stunts. Life as an actress, however, isn’t all it’s cracked up to be. Her relationship with Mary Mason, a girl in town, is strained at best, and Pearl’s mama doesn’t like her doing stunts. Can Pearl learn to balance her acting with real life? Inspirational, funny, full of bravery, and based off a true story, Wiley does a great job of bringing the time period to life. The characters are engaging, realistic, and witty. VERDICT Readers who like historical fiction, nuanced heroines, and humor will enjoy this book. Recommended for libraries where funny historical fiction is popular.”