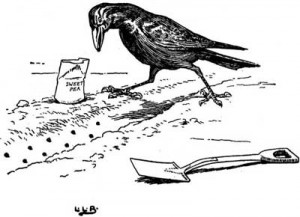 I am loving all these crow book suggestions you are sending me!

Ms. Mental Multivitamin (whose blog has put me in the path of many an excellent read) chimed in with a couple of titles and a link to her many posts singing the praises of crows:

If you haven’t read it already, check out Crow Planet (Lyanda Lynn Haupt) and (my favorite) Caw of the Wild (Barb Kirpluk).

Longtime Bonny Glen reader Kay recommended Crow Planet, too, so I’m eager to check it out.

There is a great chapter on Silverspot the crow in Wild Animals I Have Known. It made us look at crows in a whole new light.

That’s Ernest Thompson Seton; I think we have a copy around here somewhere.

Have you seen Letters to Anyone and Everyone by Toon Tellegen? We are just working our way through, and last night we read the letter from the Crow to the sparrow. All the letters are delightful, but so far, this is my favorite.

Pam recalls Those Calculating Crows by Ali Wakefield, a picture book about crows who count, adding:

“It doesn’t get a good review and I remember not really enjoying reading it aloud but my boys liked it and it was worth a look in the library.”

(It’s like that sometimes, isn’t it? Not all books make good read-alouds.)

Su gives props to good old Slow Joe Crow from Fox in Socks; Penny in Vermont reminded me that Tasha Tudor had pet crows who served as models for drawings in several of her books; and Beth of Bookworm Journal gives a shout-out to Kaw, the pet crow of Taran in the Prydain books by Lloyd Alexander.

Do you know Maxine Kumin’s story “Mittens in May” about a boy named Peter Day and the baby crow he saves and raises? It’s a sweet book.

I’m a fan of Kumin’s poetry (especially Our Ground Time Here Will Be Brief) but I had no idea she had written any children’s stories. Very excited about this.

And Lori found Comstock’s Handbook of Nature Study in a digital format!

In yesterday’s post (a reprint from 2007) I discussed at length a picture book we treasure: Johnny Crow’s Garden by Leslie Brooke. You can see the whole thing, illustrations and all (and what illustrations! ), at Project Gutenberg. (That’s Brooke’s charming Johnny Crow at the top of this post.)

Also, Alice reminded me of one of her family’s favorite crow stories: Jean Craighead George’s The Cry of the Crow.

Links to my crow posts:
Cheered by Crows
Fascinating Live and Dead Things