We’re having a week of milestones around here. Rose got her braces off today; she wore her Smile shirt in honor of the occasion, but her own smile was even bigger. 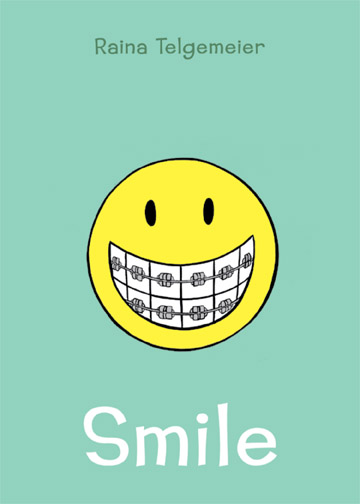 Our orthodontist and his staff are wonderful. They sang to Rose when she was finished and gave her a bag full of goodies from the verboten-while-you-have-braces list: Skittles, Snickers, Fritos, gum. And a bottle of sparkling cider. Awesome.

I sent my copyedited manuscript (the middle-grade novel) back off to my editor at McElderry, so that’s one step closer to publication. Did I tell you this book has a new title? My working title was Not the Whole Truth, but we’ve changed it to The Prairie Thief. I discovered it has a Kindle page already, even though the book doesn’t come out until August. My first digital edition!* (I’ve been told there will eventually be digital editions of my Martha and Charlotte books, but I don’t know what kind of timetable Harper has in mind.)

The final cover isn’t ready quite yet, but I think I’ll be able to share that soon.

Rumor has it there will be another major milestone in this household this week: evidently a certain two-year-old intends to become a three-year-old on Friday. At least, that’s what his sisters claim. Personally, I find it hard to believe, seeing as he was born only ten minutes ago.

*Edited to add: The book is coming out in hardcover as well.