“They all came in need, and they all left with a smile.”

I have something special for you today: Bonny Glen’s first-ever guest post. Our good friend Dan Tapper worked at a rather amazing charity event last weekend, and when he related the story to us, I asked if he would share it here. Thanks, Dan.

Making a Difference, One Smile at a Time

They came from as far away as Georgia, and as nearby as down the street.  Different colors, different ages, different backgrounds.  Some were college students and many were elderly on fixed incomes, though the majority qualified to be categorized as “working poor.”  This is the group that used to be known as the working class in America. No more.

They all came to a bright, new college campus in Danbury, Connecticut – the richest state in the richest country in the world. They came by the hundreds in lines that stretched longer than football fields.  They came for one reason and one reason only – to get free dental care.  It was something they otherwise couldn’t afford.

They all came in need, and they all left with a smile. A healthier, more hopeful smile. 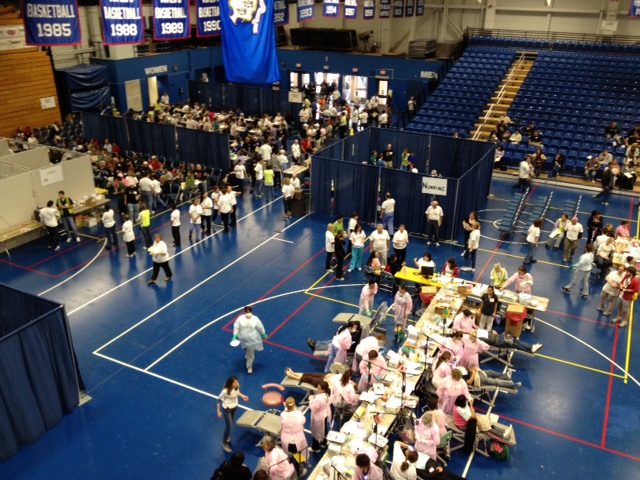 This past weekend, more than 2,000 people were treated as dental patients at the 5th Annual Connecticut Mission of Mercy, a free clinic that has been offered annually in Connecticut since 2008.  America’s Mission of Mercy is a national project designed to provide essential emergency dental services for those who need them and can’t afford them, and also to raise awareness of the dental health crisis that exists in America. The first Mission of Mercy was held in rural Virginia in 2000 – in 2008, Connecticut became the 7th state to hold one. By the end of 2012, 23 different states will hold their own Missions of Mercy.

The name says it all – relieving people of dental pain is the epitome of a mission of mercy.  Dental pain can ruin your day, can cause you to lose sleep, can destroy your mood and can make you not want to get out of bed in the morning. Dental distress can lead to greater health problems – poor dental health has been firmly linked to diabetes, heart disease and low birth weight babies.  Dental health is medical health, period.

The Connecticut Mission of Mercy is here for this reason. More than 200 dentists and 1,600 volunteers set up a 120+ chair dental clinic and treated more than 2,000 patients over a two-day period, starting at 6 a.m. both days. This was not simply a “Smile Mobile: or a quick lesson in dental hygiene.  This was a full range of dental work – x-rays, cleanings, fillings, root canals, extractions and even temporary dentures.

Dentists stood side by side dozens of their colleagues in a college basketball arena that had been transformed into a massive dental office, treating patients and doing everything with grace and good humor. All told, dentists provided more than $1.2 million in dental services for free over the two day period.

One of those patients – the first one on line, actually – was a delightful and cheerful 30-something woman named Jessica, who came from 70 miles away with her nine-year-old son to get their teeth fixed.  Jessica was temporarily in a wheelchair due to a recent leg injury, but it didn’t stop her from arriving 17 hours early – seventeen hours!!! – to get in line at 1 pm Thursday for a clinic that opened at 6 am Saturday.

Jessica’s story is as familiar as it is maddening.  Her husband works in construction and she homeschools her son.  They are a happy family, proud of who they are and what they do to take care of each other.  They are not looking for hand-outs. But his work doesn’t provide him with dental insurance, and the family makes too much in income to qualify for state assistance.  Hence, the Mission of Mercy is the only place they could turn.  Which is what brought Jessica and her son here, 17 hours early. Optimistic and grateful.

Through the day and night, Jessica made friends with those around her, charmed the volunteer staff, knitted, dozed and cared for her affable and resilient son. As she did, people filled in behind her. Ten people were there by 4 pm. By 7 pm 40 had arrived. By 4 am the next morning the line was more than 350 people long.  Everyone is welcome at the Mission of Mercy. No one has to show ID, or prove they don’t have insurance.  If you show up, you get treated. For free.

And here is what everyone noticed about the line – it was peaceful, and it was happy.  Hopeful patients became friendly neighbors, laughing and joking with each other as if they’d been friends for years. No pushing or shoving, no “He took my spot!” or “She cut in front of me!”  Just a happiness that they were about to receive some critically needed care, and an appreciation for those 1,600 people who volunteered to help them.

At 4:45 am, just over an hour before the clinic was to open, a group of 10 volunteers – mostly non-dentists who were donating their Friday and Saturday to help – walked from the parking lot to the clinic, past the line now hundreds long.  As they did, a cheer rose up from the line of soon-to-be patients.  They spontaneously began to applaud the volunteers.

“Wow,” a local television reporter said as she witnessed this burst of applause. “Did you hear those cheers?”

We all did. And we heard it again, at a different section of the line, when it happened a few minutes later. And then again for a third time. Spontaneous applause of appreciation, from those about to be served.

Once the doors opened, the two days became a brilliant exercise in precision and coordination, with hundreds of patients cycling through every hour, from registration to triage to x-ray to the dental chair.  The Mission of Mercy is not an answer – a charity event, even one as large and wonderful as this, is not a substitute for a health care policy.  Hopefully an answer can be found, one that provides people with the treatment they need in a way that everyone can afford.  Hopefully the day will come when Missions of Mercy are no longer needed.  But on these two days, that time had clearly not yet arrived. 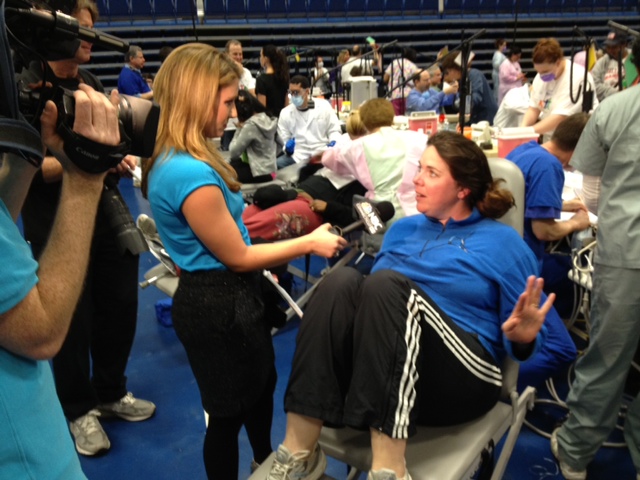 As Jessica was guided through the process in her wheelchair, the look of startled wonder on her face was one that volunteers would see again and again.  As she was treated and had her front teeth fixed, she gladly spoke with reporters and others who were bustling to hear her story. She was a star.

By the time she was finished and wheeled over to pediatrics to collect her son, who so bravely endured the unpleasant world of having cavities filled, Jessica may have had an inkling that her presence, her optimism, her gratitude and her unceasing smile had brightened all of our days.  She may have, and hopefully she did. Because it was true.

Most of the Mission of Mercy’s top organizers accompanied Jessica as she and her son were led to the exit, their personal mission a glowing success.  Hugs were given all around to our new friend, one whom we barely knew yet had come to mean so much to us.

“Thank you all so much!” Jessica beamed, ready to emerge from the clinic into the beautifully sunny and unseasonably warm March morning.  “Thank you for everything!”

We should have been thanking her.

Dan Tapper is in public relations and has worked with the CT Mission of Mercy since it began in 2008.