How my daughters are furthering my education via Minecraft 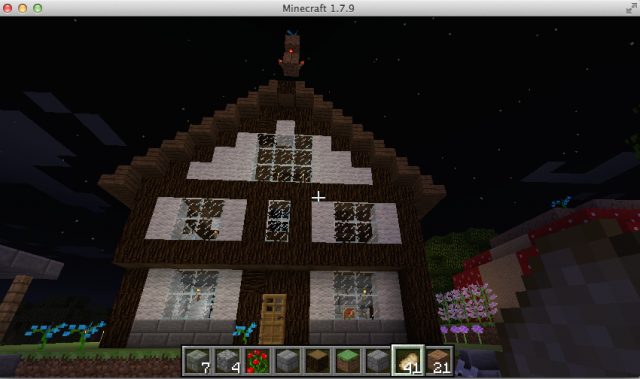 I mentioned that the kids and I share a Minecraft world. Its name is Calpurnia, after a favorite book. When I got a dog in the game, Rose offered to name it for me. The next time I logged in, “Darwin” was running around my attic—Darwin because of Calpurnia Tate, get it?

Then I wound up with a second dog. It ran around my house nameless for a day or two; then one day I returned home from a grueling shift at the ruined castle we’re building in the mushroom forest, and there, wagging its tail alongside Darwin, was “Newton,” newly monikered by Beanie. It seems I’m raising a bunch of scientist dogs, which is fine by me.

One day I accidentally fed both Darwin and Newton too many pork chops at the same time, and you know what that means: a puppy. I couldn’t wait for this new pooch to grow up, so I could see what name the girls would give it.

When I came home this afternoon, half dead after a skeleton ambush, the pup was waiting beside the front door, all grown up and sporting a new blue collar. Her name was Annie, the hover-text informed me. I was a little surprised that the girls hadn’t continued the scientist theme.

Shows what I know. 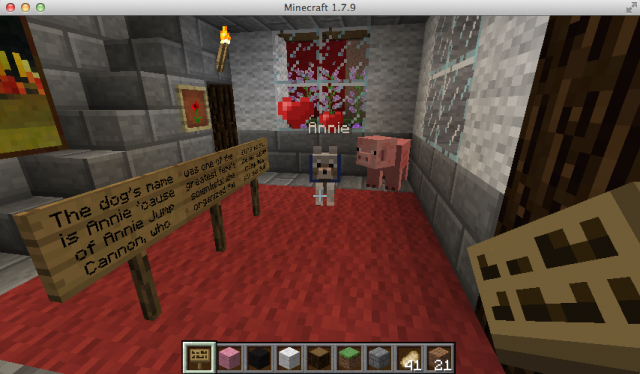 Rose, evidently aware of this gap in my education, had helpfully left some signage on the living-room carpet:

The dog’s name is Annie ’cause of Annie Jump Cannon, who
was one of the greatest female scientists; she organized the
stars. We still use her system today. Also, she was deaf.

I learned a lot more about Annie (the human, not the canine) after I logged off. She featured in a recent episode of Cosmos and my girls were quite impressed by her accomplishments. Her lifetime spanned the period between the Civil War and World War II, and as Rose explained, she was instrumental in the creation of the star classification system that is still in use today.

The girls have yet to account for the pig in my living room.