I’ve made an uneasy peace with becoming a product sold to advertisers. Now it seems I’ve been a lab rat, too.

Scientists at Facebook have published a paper showing that they manipulated the content seen by more than 600,000 users in an attempt to determine whether this would affect their emotional state. The paper, “Experimental evidence of massive-scale emotional contagion through social networks,” was published in The Proceedings Of The National Academy Of Sciences. It shows how Facebook data scientists tweaked the algorithm that determines which posts appear on users’ news feeds—specifically, researchers skewed the number of positive or negative terms seen by randomly selected users. Facebook then analyzed the future postings of those users over the course of a week to see if people responded with increased positivity or negativity of their own, thus answering the question of whether emotional states can be transmitted across a social network. Result: They can! Which is great news for Facebook data scientists hoping to prove a point about modern psychology. It’s less great for the people having their emotions secretly manipulated. 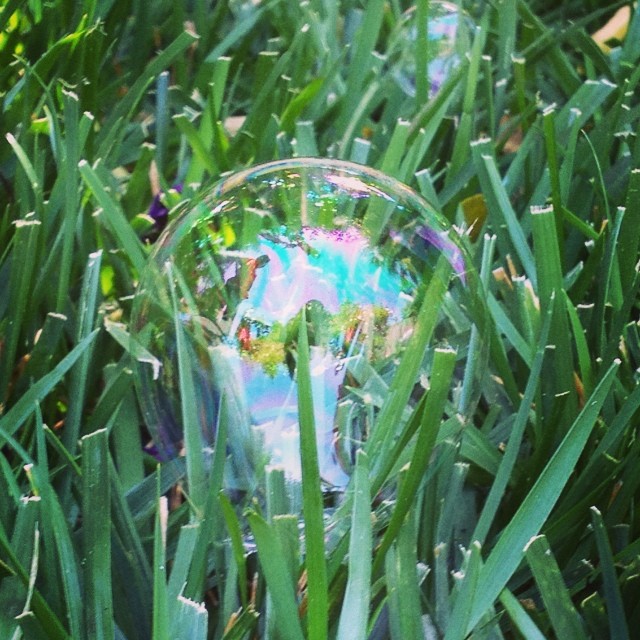 I uploaded this picture last night, intending to write my usual sort of daily-chronicle post. Then my eye wandered from the rainbows inscribed on the bubble to the blunt, browned ends of the grass and I got distracted by the ruthlessness with which we shear off the tender edges of nature. I wandered off to bed, musing, leaving the post unwritten. (Huck’s finger is much improved, was the gist.)

This morning, after reading the article quoted above (about a different kind of bubble, a ruthlessness altogether unsurprising but disgusting nonetheless), I came back here and found the photo waiting. And now I see that I’m in the picture too, there inside the bubble, taking a photo of the green world on the other side of the film. You could work up quite a metaphor there, obvious, clumsy, but apt: the insubstantial bubbles, the world outside, the illusions of people that aren’t the persons themselves.

But my frustrations aren’t philosophical (of course Facebook was always going to exploit us in every way possible) but practical. The reason a billion people have handed over their (our) data to Facebook is, at heart, a practical one: it’s the most efficient platform anyone has yet come up with for letting us keep in touch with a large number of friends and family at once. We failed at writing letters. Good phone conversations, while satisfying, take immense chunks of time. If you want to keep up with each other’s daily lives, the little things, you have to talk every couple of days (at the least) or else there’s too much ground to cover and you must out of necessity abridge.

Yahoogroups worked, for a while—you could engage in meaningful discourse or chummy banter with a good-sized group of people at once. But generally most of those relationships were new, were forged because of the group, by means of the group. I made some lifelong friends that way (hello, TAMs! hello, Karen!) but (I don’t like that ‘but’; it sounds like a devaluation of the friendships on its left, and that isn’t what I mean at all)—but—but my high-school friends didn’t form a Yahoogroup. My college friends didn’t. We kept to our phone calls, our occasional letters and visits. I read letters six times and treasured them, and didn’t write back, or did but didn’t stop for stamps.

After a while, most of the Yahoogroups I was part of morphed into discussion boards (more efficient, because they allowed for topic-sorting; less efficient, because they required administration and management) or faded into disuse. I think I’m still signed up to forty-odd lists. I get mail from three, and read one and a half. It’s years since I logged into a discussion board.

Then came blogs. Those of us still doggedly blogging for personal reasons look back on 2005 and 2006 with nostalgia: we remember what it was like in those days, less than a decade ago, when we were for the first time opening our front doors and saying here’s my house, come in. We shared too much, made friends, celebrated art and nature, got in fights, copied one another or got furious about being copied—all the same things we’d done on AOL in 1995 and in email groups in 1999, only now with photos of our children. We formed new and very real friendships: real and strange, because we knew (know) so much about each other and have watched each other’s children grow up, and yet we live so far away some of us may never meet. When one of us goes silent for a while, the others worry. Sometimes I’ll think: if she dies, I might never know what happened.

That’s if she isn’t on Facebook. Because that’s what Facebook does better than blogging—connects wide groups of people and spreads news they wouldn’t necessarily publish on any other website—and Facebook is why only a fraction of my friends-who-blogged are blogging still. Facebook IS blogging. It’s everyone blogging at once on the same platform, a platform cleverly managed (manipulated) for purposes we all agree are greedy at best, and not guided by principles that put our best interests remotely near the top of the priority list.

I love Facebook. I hate Facebook. I have loved and hated it since the day I joined. Facebook gave me back friends I had lost: that’s the sum total of my reason for loving it, and it’s immense. All those other platforms brought me new friends. Facebook reunited me with old ones. I don’t need to dress it up in metaphors. I’d lost touch with some of the people I loved best, and Facebook gave them back to me. It gave me what blogging didn’t: daily contact with beloved cousins and old school friends. Every day, it gave (gives) me photos and anecdotes of their lives, their children, their pets, their loved ones, their work. How can I measure the value of that?

If all the people I loved were inclined to blog—to blog about their personal lives, no less—I wouldn’t need a platform like Facebook. Somehow, Facebook accomplished the miraculous feat of convincing all these old friends to blog as we were doing, with oversharing and our children’s faces and outrage and sorrow and delight. And commenting is easier there, it just IS: fast, efficient (it always comes back to efficiency), and rewarded by a heartening LIKE. And—significantly—more conversational. You can reply back and forth quickly, in real-time like chat. Don’t blog comments feel more formal somehow? They didn’t use to. I feel like we used to chitchat more in the combox, but maybe that’s nostalgia. It’s probably just the time delay. If I reply to your comment here, it’s probably a day after you wrote it, and who knows if you even see the reply.

It’s strange, actually, the way we feel safer about sharing our personal stories on Facebook. We know we’re the product there; the evidence is thrust before us every time we open the tab and see a sidebar ad for a book we looked at on a different website the day before. We rail about the way they keep resetting the news feed from ‘most recent’ to ‘top stories,’ we fume at each sneaky privacy-policy change, we wince each time another website wants us to log in via Facebook before we can leave a comment.

But we go back, because that’s where our friends are posting photos of their their babies, their travels, their graduations. Because it’s a mini college reunion every time one of us posts and all our classmates chime in, laughing over an old shared joke. Because we have history together, and we care about one another’s present-day lives. Because if something serious happens, you’re going to tell your Facebook friends before you put it on a blog.

To leave, or to make the decision never to go in the first place (for reasons I respect and with a resolve I may at times envy a little), is to cut yourself off from a certain flow of information. There’s plenty of nonsense and trivia on Facebook, as there is in all forms of human interaction, including some of the best phone calls I’ve ever had. But there’s a great deal of the Real, the Good, the True there too, and it’s that—not simply the dopamine hit, as many theorists would have us believe—that brings us back. It’s genuine curiosity. It’s, to be blunt, love. I love you and I want to know how you’re doing. If Facebook is where you’re showing me, how can I stay away?

I would pay for an ad-free social connection site with no data-mining and no gross user manipulation of the sort revealed in the newly published study described in the article above. (You can click through from the article to the study itself.) But—here’s what I know. I know it’s unlikely a critical mass of my friends and relatives would too. Facebook caught us because it was free, and because there was a numerical tipping point: so many of us are there now, you really are missing something if you aren’t. Which isn’t to say anyone should be there who doesn’t want to be: I wouldn’t presume. As I said, I respect and admire their reasons for staying away.

But I’m a practical person, and I know what I’ll miss out on if I leave. I’m 45 years old and I’ve lived in a lot of places. I love a great many people. As I said on Facebook this morning when I shared the link above—my last act before logging out for a breather—”But how will I get my YOU fix?”