Rose was just recollecting with great affection all the times when she would return to the house, exhausted after a full day, and know she could count on me to have a pantry full of tasty things to eat. “And you always had a nice hot bowl of stew waiting for me,” she murmured dreamily. “Awesome stew.”

Real-life friends reading this account will be understandably puzzled. But it’s true, every word.

All right, I may have omitted one teeny-tiny piece of context. 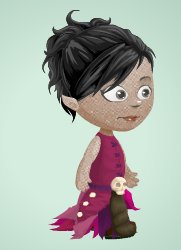 That’s right. When my children reminisce about their mother’s wonderful home-cooking, they’re talking about a computer game.

Tags: Glitch, Glitch forever, Glitch I will never get over you, I'm also an excellent stonemason, in Minecraft that is